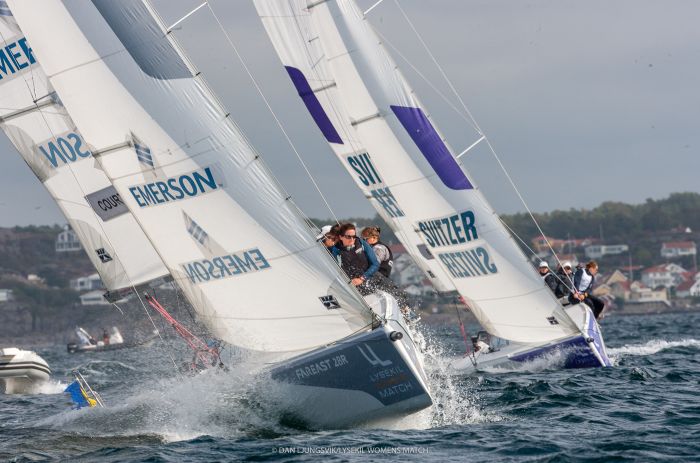 After the first day of competition we have four teams on equal points at the top of the leader board in Lysekil Women’s Match, the 2019 World Championship: Johanna Bergqvist, Pauline Courtois, Anna Östling and Claire Leroy all counting four wins and one loss.

At the initial stage of the competition all crews will face each other in a Round Robin to determine which teams will proceed directly to the quarter finals, and who will have to rely on their performance in the repechage to make it to the next stage. During day one 10 out of 22 flights in the Round Robin were completed. Four teams have won four of their first five matches: local teams Johanna Bergqvist and Anna Östling of Sweden, and Frenchwomen Claire Leroy and Pauline Courtois.

The competition could not have started better for Johanna Bergqvist and her crew as they won their first four matches, heading in to the afternoon as the only undefeated team.

“We had a great day today: the girls have done an amazing job. Pauline Courtois sailed better than us and there is not much more to say about that. But we really had a great first day and are looking forward to tomorrow,” Johanna Bergqvist says after beating 2018 World Champion, Lucy Macgregor in the second match of the day and finally losing the last match of the day to Courtois.

Pauline Courtois who made sure to finish of the day with a statement as they beat thereto undefeated Bergqvist Match Racing in their last match. All in all, a pretty good day for the French team: “It was quite good for the first day, we are really happy with the conditions with a lot of wind at the end of the day.”

During the first day we saw all kinds of weather conditions in Lysekil. In the morning, the sailors had to deal with heavy rain and light winds, but in the afternoon the wind picked up as the sky cleared.

Behind the leading four teams Lucy Macgregor has won three out of four matches (one match in the seventh flight was postponed due to a boat break down). The reigning World Champion is pleased with the first day out on the water, knowing what they have to do the following days: “Going in to the next couple of days, I think it is all about improving as the event goes on. Then hopefully we will still be in the fight that last day. Bring it on!”