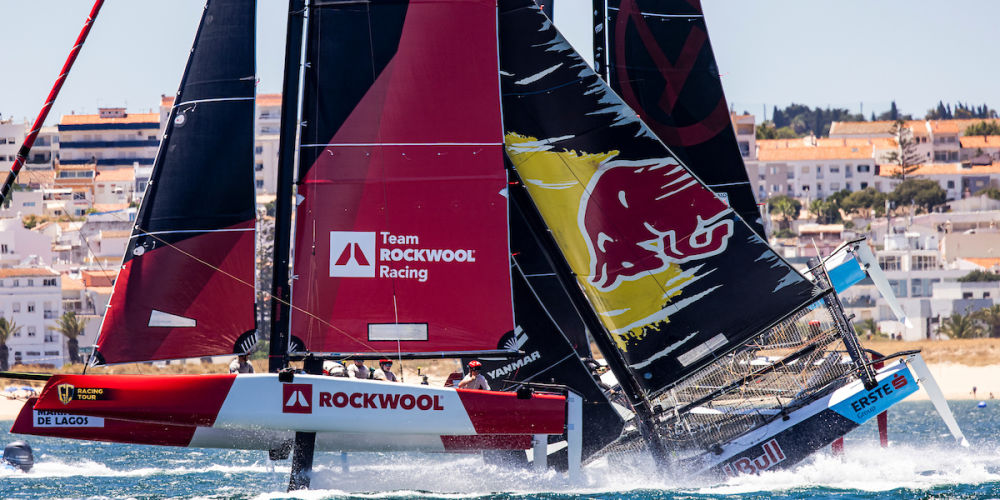 Following the opening event of the GC32 Racing Tour’s ninth season in Riva del Garda, the World Sailing-approved foiling catamaran circuit moves on to Portugal for the first of two events in Lagos. The Algarve venue, 10km away from Cape Finisterre, the southwesternmost tip of Europe, hosted two GC32 Racing Tour events for convenience as the world emerged from the pandemic in 2021. But this was so well received by the foiling catamaran teams that two events are being held here again in 2022.

The GC32 Lagos Cup takes next week over 22-26 June and will act as a warm-up for the main event of the season, the GC32 World Championship over 13-17 July.

Significantly the GC32 Racing Tour also returns to its pre-pandemic fleet size with 10 flying catamaran teams taking part, including two from countries new to the circuit.

From Poland is HRM Racing Team of Piotr Harasimowicz, CEO and Founder of IT outsourcing company Vector Synergy. Like Swiss Foiling Academy last season, the team has very similar objectives for its own national sailors. Harasimowicz, who is a lifelong sailor and will helm his GC32, explains: “Its mission is to select, train and introduce selected young Polish dinghy competition sailors for the high-performance sailing competition world.” At present, he says, on board are “the old guys” who range in age from 25-47 while the youngsters, comprising five boys and five girls, are 17-18 and will graduate up to the GC32 as they develop. “I believe the GC32 is the perfect platform to introduce these guys into the high-performance sailing world,” says Harasimowicz. He acknowledges his present crew is very green having only acquired their GC32, once the 2015 season winner Sultanate of Oman, in March.

Another nation new to the GC32 Racing Tour is Team Canada. Helmsman Phil Robertson who previously made waves in the GC32 when he won the GC32 Championship in Oman in 2017, is handing over the stick to Graeme Sutherland for the next two events. Sutherland, who grew up in New Zealand was born in Canada and will be joined onboard by fellow members of the Canadian SailGP team as well as a few new recruits.

“I normally trim the main on the GC32, but I have driven Moths and Nacras before,” says Sutherland, who once ran the New Zealand Extreme Team’s GC32 on the Extreme Sailing Series with Chris Steele. “We have got a pretty new crew. The other guys onboard haven’t sailed the GC32 that much at all. This will be my first event driving, I am looking forward to it. There are a lot of good crossovers with the F50. The GC32s are physical boats, they are rewarding when you get it right, but they are also quite punishing when you get it wrong.”

Already the team has been training a few times in Lagos: “It is a great venue, the marina and the set-up there is awesome, it’s a great town and a good sailing venue.”

Making its return to the GC32 Racing Tour is Team Tilt. The Swiss team entered the history books when it won the GC32’s first ever World Championship in 2018. On the helm as ever is Swiss two time Olympic 49er sailor Sébastien Schneiter: “It is always a pleasure to come back to racing the GC32 and its great to be back with a bigger fleet this year – it seems like the level has definitely gone up another level again. We have a new line-up this year and it will be interesting to see where we stand.

“There should be some really exciting racing in Lagos. We had some great times there this winter training with some of the other teams.” The team now represents Switzerland on SailGP.

Delapierre has some GC32 experience, standing in for Erik Maris on Zoulou during training. “I think it is a really good boat,” he says. “It is really reliable, which is a very strong point for a foiling boat. It is one of the first classes of foiling boat and it is still there, which is pretty good. I am very happy to join the GC32 Racing Tour. It is nice to discover a new class.”

As with the other new teams, Delapierre acknowledges that their time on the boat has been limited. The training they have done has been in Lagos, a venue he likes: “We’ve had some really good conditions. It can be windy which I like. If there is flat water and big wind it will be good fun. We’ll see what it is like if we get an on-shore wind.”