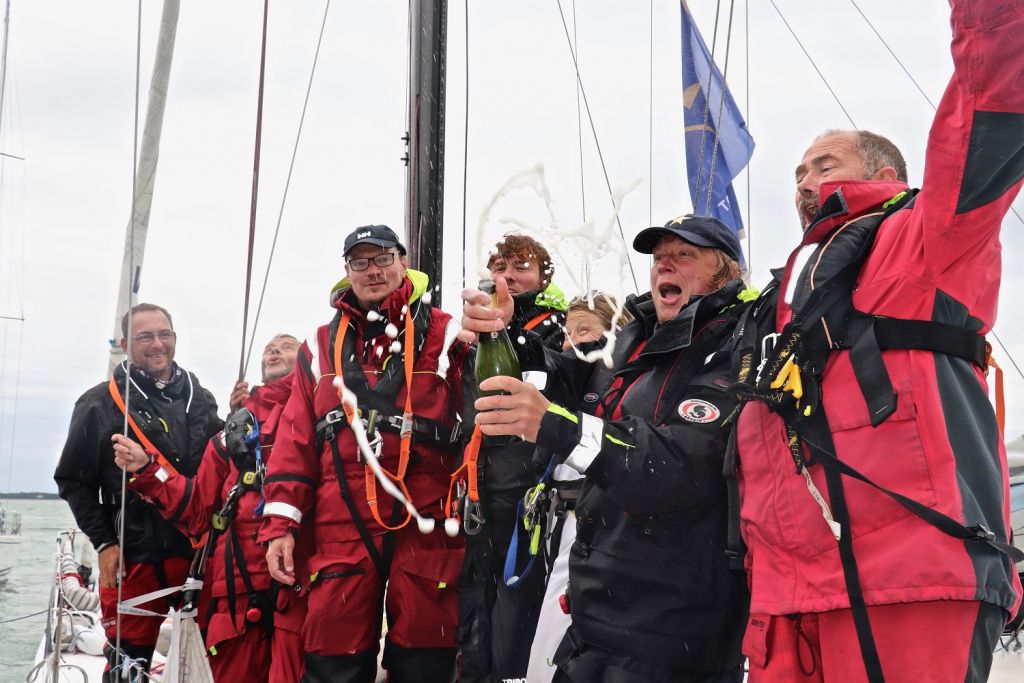 Finishing the Sevenstar Round Britain and Ireland Race is a massive achievement and there was elation on the dock and a few tears of joy on the 13th day of the gruelling 1,805 nautical mile race.

A huge reception dockside in Cowes from friends, family and the RORC Race Team was reserved as four more intrepid teams successfully finished one of the world's toughest yacht races.

The team of 12 was skippered by Gareth Glover. Alan Baird, the oldest sailor in the race was part of the crew and he had worked a lifetime as a tugboat man in the wilds of Scotland. Racing in the Sevenstar Round Britain Race was a birthday present from his family, who were there to greet him on the dock.

“For me, the Sevenstar Round Britain and Ireland Race is one of the toughest races I will ever do,” said two-time Clipper Round the World skipper, Glover.

“At times, racing in the Clipper is simple, like when we are pointing in one direction for weeks on end. This race has tidal gates, wind holes, 40 knots of breeze, big sea state; it is just relentless. The emphasis for us was to finish this race without any injuries, and we have achieved that. We did have some gear breakages, but we fixed it and carried on racing.”

Gavin Howe's Sun Fast 3600 Tigris, racing two handed with Sam Cooper crossed the finish line just 34 minutes after EH01, taking an elapsed time of 12 days 0 hours 53 minutes 55 Secs. Gavin had previously raced the course two handed in 1978, but this was the first time he had completed the course non-stop:

“I never opened the toolbox once, which was the acid test for how well prepared we were. The boat has been bone-dry inside which was a big plus,” commented Howe. “When I was Sam's age doing the race, I thought I was quite old, but now I think – my goodness did I really do this in a boat with a 17ft waterline with no self-steering or electricity.”

Ari Kaensaekoski's Class40 Fuji finished the race in an elapsed time of 12 days 5hrs 15mins 42secs. With a crew of seven, the Finnish yacht was the fifth Class40 back to the finish in Cowes.

“We broke our mainsail on the West Coast of Ireland which we patched up, but it was slow going after that,” explained crew member Rosie Nunn, a regular RORC racer who had joined the crew. “I don't think we have seen the sun for more than a few fleeting hours, but we are all safe and well and we have really enjoyed the challenge.”

Sailing Logic's First 40 Arthur Logic, competing for the first time, was skippered by Jonathan Tyrrell and finished in an elapsed time of 12 days 8 hrs 51 mins 29 secs. Two ribs loaded with supporters braved the wind and rain to follow the boat in from all the way down by Stokes Bay.

“A race of three halves,” commented Jonathan Tyrrell. “The race up to the Fastnet Lighthouse was relatively easy with a favourable wind direction, but Fastnet to Muckle Flugga was just crazy with big wind and sea state. After Muckle Flugga it got much easier with light conditions.”