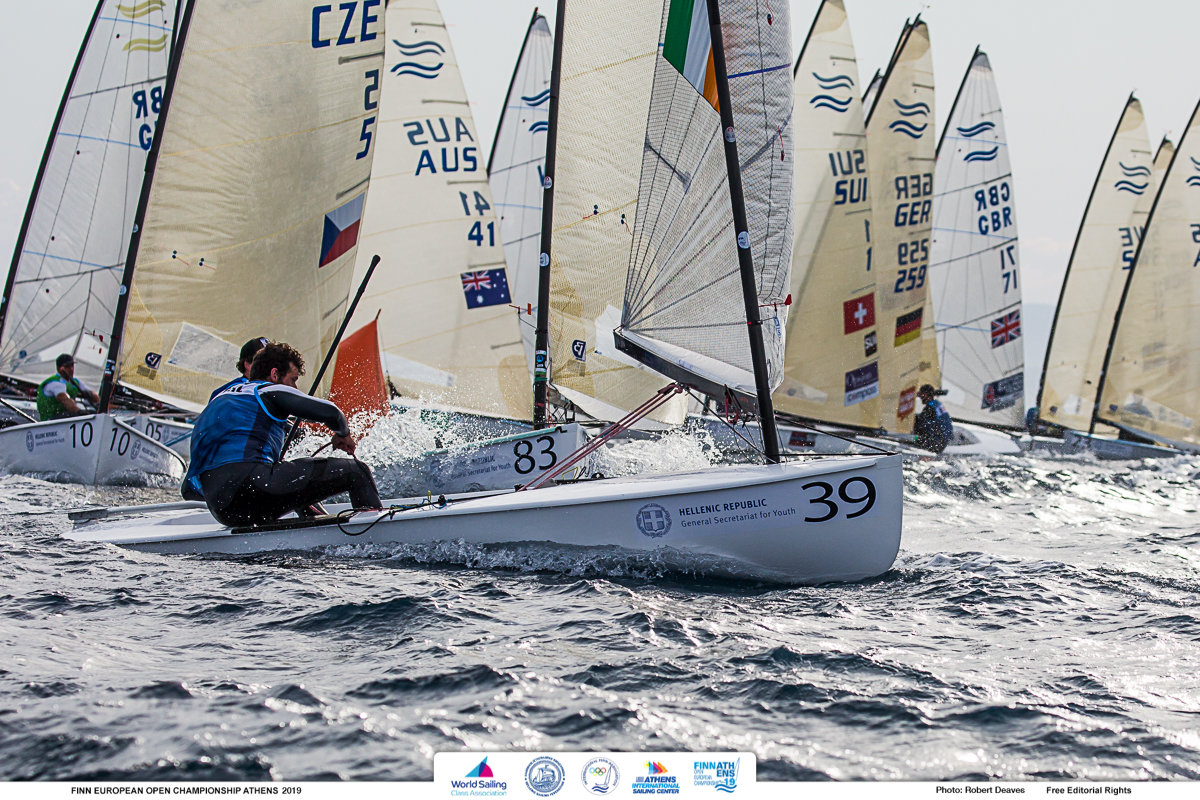 After another long day on the water, two more races were completed at the Finn Europeans in Athens. Ioannis Mitakis, from Greece dominated the first race to take the home win, while Jonathan Lobert, from France, took the second, also leading all the way. After five races so far, Giles Scott still leads overall from Andy Maloney and Alican Kaynar. Joan Cardona, from Spain continues to lead the U23 European Championship.

It was a day of two halves again. First came the waiting, but this time on the water. The fleet was sent out on time, only for the wind to vanish into the hills. Three hours later, race officer, Peter Reggio, sent the fleet ashore, only for the wind to return almost immediately. An hour later, the fleet was back on the water with a building wind that looked promising.

Race 5 got underway in a 7-8 knot breeze, after three attempts, that brought some different faces to the front and began a day of racing in which most of the sailors picked up at least one high score. Top Greek sailor, Ioannis Mitakis, the 2012 European champion, emerged in the lead at the first mark to extend on every leg for a comfortable win. Scott was second at the top, but uncharacteristically, lost ground downwind. Facundo Olezza, from Argentina, rounded the gate in second from Alican Kaynar, but Scott recovered to cross in third the finish.

The wind had dropped during the race, but the decision to hold another was rewarded with a solid 10-12 knots and Oscar flag being raised for free pumping. Those who started at the pin initially looked in trouble, but after they tacked across the advantage became clear. Lobert rounded just ahead of Jorge Zarif, from Brazil and Jake Lilley from Australia.

Lobert, the 2017 European Champion, sailed away to claim a confident win, while the battle behind was fierce. Nicholas Heiner, from The Netherlands, was up to second at the gate, but Lilley came good on the final round to take second place. Olezza rounded off a great day with a third to move up to fourth overall.

Heiner placed fifth to end the day in eighth overall. After picking up a black flag in the first race of the day, along with 13 others, he was keen to make amends in the second.

“It was a bit of a shame in the first race with a black flag. A 90-point discard is never much fun. But I kept cool and sailed a good second race. The wind picked up really nicely and it was good fun. Mixed feelings, but the first one was a bit costly for the rest of the event.

“This is our Olympic trials and it’s between me and PJ [Postma] we just want to try and sail as best as possible here and to still get away with the podium would be nice. I still need to have a good two days and the we’ll see and hopefully fight for the medals in the medal race.

“So far the regatta has been a bit tricky. It was glamour sailing conditions yesterday, but a lot of waiting as well over the three days. Again it’s a bit mixed; it would be nice to take the races away each day but waiting is part of our sport and I think that’s a crucial thing to feel comfortable with, but I hope we get another three nice racing days.”

At the half way stage, the battle for the four Tokyo 2020 Olympic spaces is heating up, with 13 of the 24 nations in the top 25 overall, and all very close on points. One of them is Oisín McClelland, from Ireland, who though he still has a lot of work to do, is sailing one of his best regattas ever. He is in 22nd place after five races, and the tenth nation looking for a Tokyo spot.

“Once we got racing the wind slowly died through the race and I had to recover a lot. The breeze came in for the second race and I got away at the pin and crossed the fleet. I managed to get across to the left on the second beat and that shift came in and got me round the mark with a bit of space behind and allowed me to hold my position downwind.

“Everyone is fighting really hard and one little mistake and you are down a few spots before you know it.”

He’s been in the Finn for about four years and has been working hard towards this moment. “We’ve been here for about a month beforehand, but previously I’ve been training at home before Christmas. We spent two months in Ireland on the south coast where the other Irish sailor is from and we were sailing in big waves and big wind all winter. It was 5-6 degrees and 25 knots, so we toughened up a bit. Warm Lycra is a bit of a change from my winter situation, when we had about six layers on.

“This is the second qualification regatta out of the three before Tokyo, so I am pushing hard. A lot would have to go my way in this regatta to get the place but I am doing as much as I can to be in with a shot at the end of the week.”

Jake Lilley represented Australia in the Finn class in Rio 2016, and while he still has the Oceanic continental qualifier to come, would prefer to seal a place for Australia this week.

“Really happy to get two races in even though it was late in the day. We are all adjusting to the late jetlag of the regatta.

“In the first race I had a really good start and got off the line, but then fell backwards the whole race, so I was pretty disappointed with that and sought to make amends in the second, and just came away with a solid race finishing second to Lobert, who was on fire.”

On racing in the big fleet, “It’s the same as everyone, but getting off the start line with 90 boats is no mean feat, so if you can do that well and get a shift then you are off to the races, but if you can’t then you are trouble. With this many boats, there is congestion and you just need to get around the marks cleanly, both top and bottom. I didn’t get around the bottom mark cleanly, and probably lost 20 boats in the first race. The same thing can happen at the top if you are in trouble. So keep it clean and get round the marks as quick as you can and keep hustling.”

With a possible five more opening series races there is a still a long way to go for any sailor hoping to qualify their nation for Tokyo. At the moment the top four nations are France, Norway, Greece and Croatia. However, the next eight places are all filled with sailors trying to qualify, so the race is a long way from over.

The championship is still one race behind so three more races are scheduled for Thursday. Racing is scheduled to start at 13.30, with live tracking available through YouTube and SailRacer on the event website 2019.finneuropeans.org.