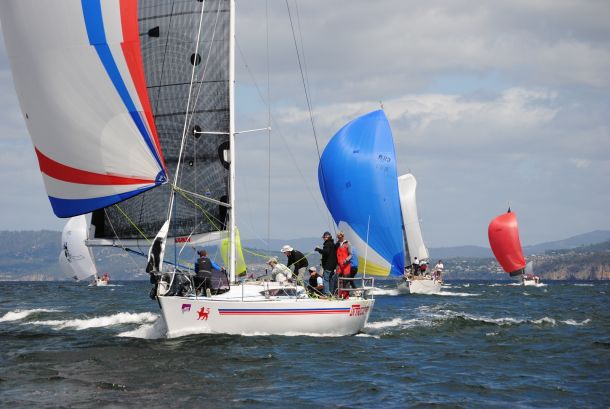 This summer of yacht racing marks the 30th season in which veteran Hobart yachtsman Don Calvert has raced his equally veteran Castro 40, Intrigue, on the River Derwent – and it could well be another winning season. Since leading Australia’s Admiral’s Cup team at Cowes, England, back in 1985, Calvert and Intrigue have won a summer pennant series on the Derwent almost every year.

A broken mast put an end to an overall win last season, but Intrigue has bounced back with a new mast and sails, today confirming her overall lead under both the AMS and IRC handicap categories in the Combined Clubs Long Race Series with a win and a second place in the penultimate race of the summer.

With one long race to sail, on March 14, Intrigue heads the AMS leader board with a net 7 points, comfortably ahead of Ian Stewart’s Mumm 36, TasPaints on 15 points. In third place overall is today’s race winner, Matthew Denholm’s Mumm 30, Cleopatra, on 23 points.

Intrigue’s lead under IRC scoring is much closer, just one point ahead of The Protagonist, skippered by Stuart Denny. Intrigue has a net 8 points, The Protagonist 9 points while third overall is Roger Jackman’s Doctor Who on 15 points.

Group A sailed a 32 nautical mile course from Bellerive’s Victoria Esplanade start line down the Derwent and out to Black Rocks in Storm Bay in near perfect sailing conditions – a spinnaker run down the river in a light nor’easter, a good beat to windward to Black Rocks in a 15-18 knot nor’easter and then, back in the river, a fast spinnaker run before a freshening south-easterly seabreeze.

Line honours in Group A went to Peter Cretan’s Martens 49 Tilt after a close battle with Nexedge (John Mills) and Doctor Who, but handicap honours went to the smaller boats, the Mumm 30 Cleopatra winning both PHS and AMS categories on corrected time. Intrigue finished second in AMS and also won the IRC from The Protagonist.

Malcolm Cooper’s Kaiulani and Stewart Geeves’ Footloose shared the honours in Group B, Kaiulani winning the PHS category, Footloose the AMS category and they in that order in overall results. Kaiulani leads the PHS leader board by three points from Footloose, with the latter 10 points clear under AMS.