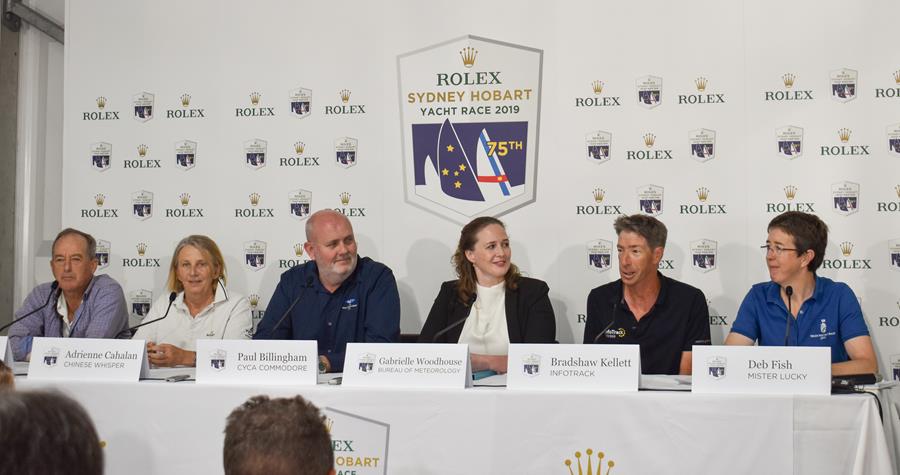 The Bureau of Meteorology (BOM) forecasts the 2019 Rolex Sydney Hobart Yacht Race will start in clear and smoke haze-free conditions.

Gabrielle Woodhouse, from the BOM, said the forecast on Boxing Day of north to north easterly winds should make for a “good start” to the race at 1pm on Sydney Harbour.

Speaking at the Cruising Yacht Club of Australia (CYCA) on Friday, Woodhouse also said that it is unlikely the 75th Sydney Hobart will be impacted by smoke haze from the bushfires in NSW like those that forced the abandonment of last week’s Grinders Coffee SOLAS Big Boat Challenge in Sydney Harbour.

However, the challenge for crews in the 628-nautical-mile race will exist in how they respond to an expected southerly, the arrival of which remained uncertain this far out from the event.

CYCA Commodore Paul Billingham said, “The CYCA’s first thoughts are with the fire fighters and those affected by the fires. But it looks like we are going to be clear on the Harbour for Boxing Day. While we are optimistic we will be clear come Boxing Day for the start, we will keep an eye on what’s happening over the next few days.”

Billingham said the CYCA has contingency plans in place, should conditions change.

Billingham said the forecast makes for a “tricky” race. “We are still a week away from when most of the boats will be racing down the coast,” he said. “As time goes by, the predictions and the forecast start to converge. But there is a lot more uncertainty this year than perhaps there has been in the past. We will keep a weather eye on what is happening.”

Bradshaw Kellett, navigator on the super maxi, InfoTrack, said the sooner the southerly strikes the better. “We’re really happy for some upwind sailing. We are hoping the southerly gets up the coast for 1300 hours on Boxing Day … and 25 knots would be perfect for at least 24 hours.”

Adrienne Cahalan, navigator on the JV62, Chinese Whisper, registered with the CYCA, expects the race to hinge on tactics.

“This looks like a forecast of navigators going to be up all night,” she said. “It is going to be a very tactical race (with) a lot of transition zones.

“For us, our main competition, in the 50- to 60-foot class, are the TP52s and they like the downwind conditions best.

“With this race, it is a lot about transition zones. In a way, the more transitions there are the better chance you’ve got when it is a very tactical race.”

Andrew Buckland, navigator on the Sydney 38 TSA Management said despite the uncertainty, “There is some belief” that the forecast “gives the little boats a chance.”

Deb Fish, the English navigator on Mister Lucky, a Jeanneau Sun Fast 3600, said: “It’s really difficult to say what will happen. It really comes down to which boat gets the most proportion of downwind racing versus upwind. It’s too early to say which boat that will favour.”