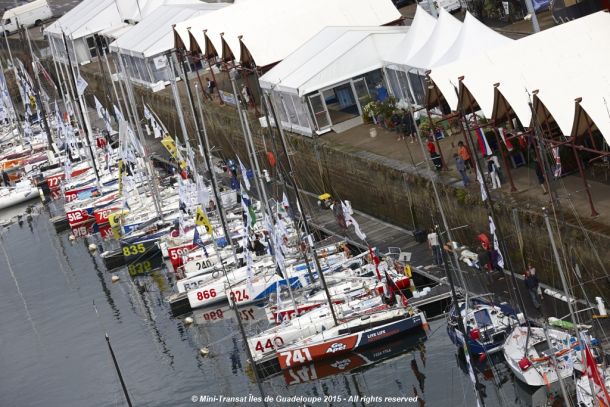 All the Minis waiting for the start. Photo Mini Transat îles de Guadeloupe.

Once again everyone is happy that the weather is good. With only two days to go until they set off on the Mini Transat îles de Guadeloupe, the skippers embarking on the challenge feel the pressure creeping up on them. Not everyone reacts in the same way, but everyone has his or her own little tricks to take the pressure off. They might choose to concentrate on the food supplies, as they know that material pleasures can sometimes help calm their minds.

With only two days to go until the start, the skippers are almost ready. All of the competitors are working on their race strategy, and with only a few exceptions, this entire little world is ready to set sail on the sea. All they need to do is some last-minute shopping to stock up on fresh food. With such a short time to go before they leave, the sailors are reflecting on how much time they will spending on board their boats.

No one is expecting to spend more time than absolutely necessary cooking things on their stoves. Little snacks, energy bars and other sweet things will take their place alongside freeze-dried food, which is still popular with most of the racers, or canned foods that only need to be warmed up in hot water. The second stage will be another kettle of fish: it will be all about getting through, adopting regular rhythms, and keeping things level for more than 15 days in a row. Two stages, two different approaches on the same course.

With only two days to go before the start, the pressure begins to mount before the big launch. It’s all about character and previous experience, and no two people react in the same way. Some people are overtaken by stress and work with it, whilst others don’t seem to be at all worried. There are two worlds: the one of Ian Lipinski, who has had a huge crisis of confidence about the crossing, and that of Pierre-Marie Bazin, who has chosen to ignore any worries before the start. The first one is sporting some shiny tinsel that he would love to get rid of, while the other (Pierre-Marie) is basking in the good fortune of being a new father, and is balancing this by sporting the colours of the Voiles des Anges association, a group of more than 400 people who have lost a child in infancy. He will wear these colours on his Atlantic crossing.

Some people carry their stress in a relatively relaxed way: they know that the last few hours are difficult to get through, with all the worries of having forgotten that one tiny thing that might throw a spanner in the works of their beautiful machine. Clément Bouyssou confesses to having stage fright: for him, stress is second nature, but he knows that this won’t affect his performance. From this moment, until he is at sea, the course will all pan out well.

So, there are some people not at all hindered by this devilish pressure. The great favourite, Davy Beaudart, admits bluntly that, with three Mini-Transat races under his keel already, with a fully prepared boat and positive results in the pre-season racing, there is no reason at all to make a big fuss. It’s pretty much the same feeling for Ludovic Méchin, even if sometimes, the sailor surprises himself by being worried about feeling so prepared! Each person has his or her own contradictions.

Whether responding by getting worked up or feeling calm, stress is an unavoidable part of the start of a transatlantic race. But at the end of the day, it will only have a little influence over their performances, just before they enter onto the stage. The scene is set and the curtains will go up on the play, and everyone knows that ’’the show must go on!’’

What the sailors have to say:

Henri Marcelet (Région Nord Pas de Calais)
“The tension mounts bit-by-bit, today. You can feel it coming; it rustles through the pontoon…I think everyone just wants to get going. As the weather conditions are good, it takes the pressure off significantly. I had prepared well in advance… so I saved some time and energy at this point. This morning, I walked from Terboul, as I wanted to walk quietly for a while- it does me good. I think I have only just really realised that in two days, I will be living what i have dreamed about for 2 years.’’

Quentin Vlamynck (Arkema)
“I am not stressed. The weather is perfect; I just want to get going. I went to Thalasso yesterday, then someone offered me a spa treatment- it was such a shame that I couldn’t take that up!’’

Ian Lipinski (Entreprises Innovantes)
To get rid of stress, the best thing is to do some sport. I also try to do some relaxation therapy…but I often do that anyway, in the days leading up to the start. I really want to get out on the sea…that always manages to sort things out for me.

Clément Bouyssou (Le Bon Agent)
“The last few days are always difficult. There is the mounting pressure, the family, your close friends who come to give support, but you don’t have time to see them properly as you have all these other things to think about and this all adds up to quite stressful times. But I know that as soon as I am at the same latitude as Penmarc’h, everything else will have been brushed aside.’’

Ludovic Méchin (Microvitae)
“No, I don’t really feel stress; it is kind of surprising to me that I don’t. I know that, in reality, I am ready. The fact that this is the second time for me changes the game a bit… in some ways, I already know the ropes.”

Pierre-Marie Bazin (Voiles des Anges)
The best way to avoid pressure? Simple! Become a father a few days before you leave…then the preparation days will be the last of your worries. I made sure to prepare well in advance…so in fact, it’s all gone really well.’’