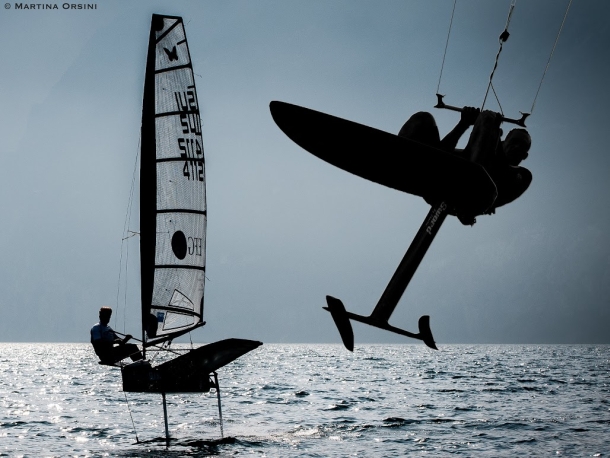 Dozens of foiling craft are preparing for take off at Malcesine, on Lake Garda, to take part in the second edition of The Foiling Week from Wednesday 1st to Sunday 5th July.

Foiling Week 2015 unveils a full programme of foiling activities. A year ago Foiling Week made its debut with a new format of sailing event that brings together the theory and practice of the art of foiling.

During the five days there will be three separate one-design racing regattas, two long distance races, a technical forum and an exhibition of boats and accessories. The event is open to the public, anyone can attend the conferences at the Forum, see, touch and try the flying boats.

One-Design Foiling Regattas
The spectacle of the races on the water will be exciting and compelling. The Flying Phantom catamarans and Moth International monohulls have chosen Foiling Week to compete in a stage of their respective circuits of international regattas.

Flying boats of any kind will race during the final weekend of two ‘Long Distance Races’ on a course to include the venues, Malcesine, Campione and Ponale, Malcesine.

The TFW Long Distance Ora and Peler edition
The race course of 25 nautical miles will involve all the wind and wave conditions that Lake Garda may serve up: The impetuous Peler wind from the north when sailing in the morning, the steep waves of central lake and the powerful gusts of Ora wind from the south in the afternoon at Ponale.

TFW Forums
At the Forum designers and builders meet the sailors to share their ideas, projects and achievements. A meeting to exchange ideas, evaluate, compare solutions and develop concepts.

The programme of the forum will take place during the first three days, with current flying boat news, launches and developments, presented by their protagonists, followed by round tables to allow the audience to interact with the presenters, discuss comparisons, understand guidelines that will lead to more amazing developments in the near future.

Topics include the designers of foils applied to IMOCA oceanic monohulls, who will clearly explain the theory of operation of this incredible innovation in ocean navigation.

The designers and builders of modern production flying boats will explain the philosophy that has guided their projects to be used by the average sailor with the same confidence as with sports boats. The Flying Phantom, Wazp, Gunboat G4 will be explained by the voice of their creators, manufacturers and testers.

The secrets of Emirates Team New Zealand foils; the experience of two C Class teams; the creators of new prototypes, the Vampire project, the Whisper and Rave V; renowned designers and engineers in this key technology will share their knowledge and entertain audiences of TFW Forum.

The base of the Foiling Week is Malcesine, at the Fraglia della Vela. The experience of the Fraglia team will support and safely manage the ambitious programme of racing, Fraglia provides the perfect setting for the display of boats and the venue for the Forum. The FVM has been the key partner in the success of Foiling Week since the first edition.

Funivia Malcesine Monte Baldo is the official sponsor of KiteFoil Invitational, the best riders in the world will compete on a course specifically designed for KiteFoil. The Malcesine Monte Baldo KiteFoil Invitational will be the fireworks show of Foiling Week. The KiteFoil are fast and acrobatic. In the TFW Long Distance Races, the KiteFoil with their boards and extremely efficient kites will challenge flying hulls moved by sails and wings.

Carrera is a technical partner of Foiling Week, and will provide helmets and glasses specifically designed for fast and extreme flying boats.

Gac Pindar provides for the second year the logistic support to the event:the company is trusted for the exceptional service and dedication and is the logistic provider of choice for other world renowned sailing events like the Extreme Sailing Series and the Volvo Ocean Race.

Moses HT is the first company in Italy to have invested in the development of foils for kiteboards. Their products are available for testing in water and their experts will give valuable information to fans who will intervene.

The town of Malcesine and the Hotel Association Malcesine will welcome all who wish to attend and participate in Foiling Week 2015. Prize giving and social events during the week will be freshened by fine wines of Drei Donà Tenuta La Palazza Vineyard.

Anyone wishing to try the boats and KiteFoil can book by filling the contact form available on the page www.foilingweek.com/about/entry-forms/

For detailed information on The Foiling Week visit: www.foilingweek.com