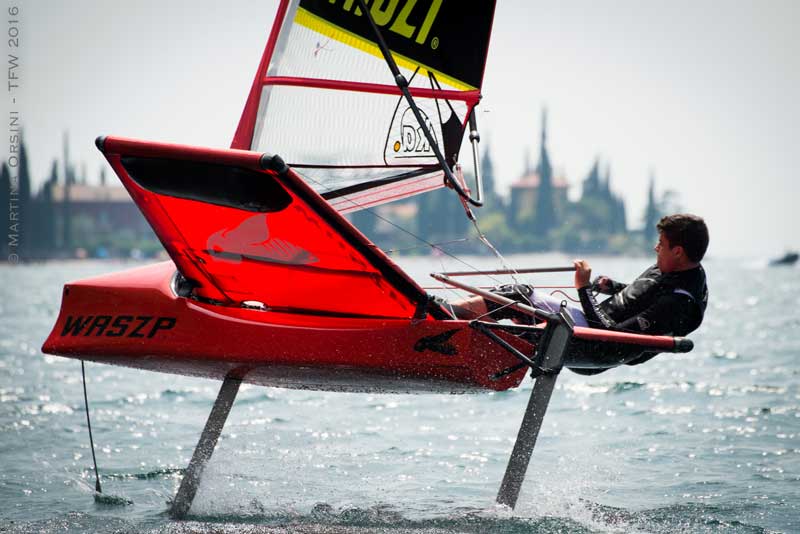 The Foiling Week, now reaching the 4th year, is expanding again offering more events and richer programs. The first and only series of global events dedicated to the amazingly fast foiling boats, their sailors and designers is heading to destinations in Europe, USA, South America and Australia.

The Foiling Week Association, together with a wider group of clubs on Lake Garda, will host the first 2017 event from 6th to 9th of July. The program will include the TFW Forum in the morning and the on-water activities mainly in the afternoon with a Foiling Expo and Foiling Boat Trials available throughout the event. There will be races for the one-design classes, a fun downwind long distance race along with prototypes and a permanent test area for the boat trials.

Moths, Flying Phantoms, S9, Waszp, A Class catamarans, Kite Foil, Wind Foil and many other classes will race on the one design race course, while prototypes will race the TFW Downwind Long Distance race together with the one designs. High numbers are expected for the Moth races considering the Worlds will be a few days later at the same club.

Solar powered foiling boats will be also protagonists at Foiling Week. V20, the world’s first one-design solar powered foiling boat will demonstrate their capabilities while students are challenged to make the smaller V5 foiling. Emission free power boats are aligned to the sustainability culture that Foiling Week wants to introduce to the sailing community together with

Sailors for the Sea

Sailors for the Sea is a leading conservation organization that engages, educates, inspires and activates the sailing and boating community toward healing the ocean.

Gurit TFW Forum will be run in the morning. This year the forum main topics will be accessibility, safety and sustainability, plus discussions on latest AC designs and production boats.

Accessibility to foiling is about the learning curve and spread amongst all sailors including children and women. Foiling is now ready to be the first sailing technique beginners can learn.

Because foiling is faster, safety needs the implementation of specific precautions and rules, in racing, boat design and sailors equipment.

Foiling Week wants 3.0 sailing to be the ambassador of a new way to live sailing. Sustainability is a key value that the foiling community can help spreading to the whole nautical world.

The Foiling Expo and Foiling Trials will be open daily to show and demonstrate the latest products and technologies available for foiling. There will be trials specifically dedicated to women and children, organized in co-operation with Magenta Project.
The Magenta Project was formed by the sailors of TeamSCA, the first all female team to compete in the Volvo Ocean Race in twelve years. “Changing a culture” is Magenta Project's goal, Foiling Week Association share the same idea. Magenta's girls want to promote women's role in sailing, Foiling Week promotes a new and challenging way to sail for all.

Every day Forums, Races, Expo and Trials create experiences that people will share at the Foiling Week evening socials events. Foiling Week is the place to be for every passionate sailor looking for an intense and exciting 3.0 sailing experience.