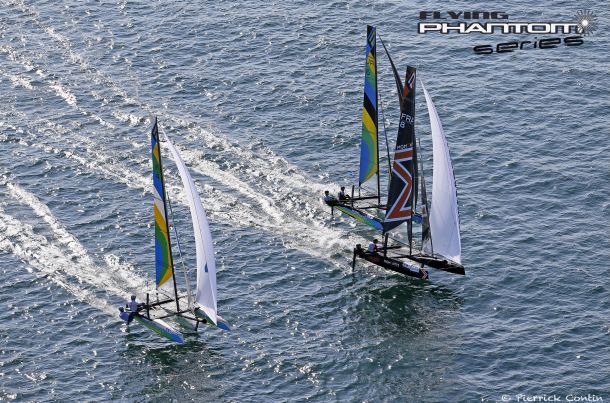 Every other year, the Raid des Corsaires is one of the biggest long distance race events in France for racing catamarans. On Saturday, over one hundred crews with boats from 16 to 21 feet enjoyed a long sail from Saint Malo to Cancale and on Sunday from Saint Malo to the Fort La Latte near Cap Frehel.

Friday was supposed to kick-off the three days of racing with a One Design Race off Saint Malo, unfortunately mid-afternoon wind conditions were too light to start a race. But, by 5pm all Flying Phantoms went out on the water with the wind getting up to 7-8 knots. It was a good opportunity for the fleet to enjoy the Bay of Saint Malo and also for the top team to develop their foiling skills upwind in a low wind range. First speed test results indicate that foiling upwind in such wind conditions may bring a 2-3 knots speed gain over skimming mode with the same angle.

The Saturday long distance race referred to as “La route de Cancale” was designed to sail from Saint Malo along the coast up to a mark off Cancale. The race started in sunny weather with a wind at less than 10 knots. The first miles were a nice downwind battle for the participants under the ramparts in Saint Malo with Bontemps and Amiot taking the lead. They succeeded in consolidating their position, but with Franck Cammas and Thibaut Vauchel on their back. The race along the coast heading east was a succession of reaching and downwind sections, Bontemps and Amiot succeeded in making the break with their pursuers after Cancale, whereas Cammas and Vauchel were sailing hard for second place. Bontemps and Amiot arrived 3 minutes ahead of Vauchel – Lamotte and 6 minutes ahead of Cammas – Joubert.

Similar weather conditions on Sunday for “La route des Forts” drove the fleet to Fort La Latte near Cap Fréhel. The race started with a fantastic downwind battle between the top 3 teams with Bontemps taking the lead off Dinard and keeping it until the end of the race.

The podium was identical for the results of the 2 races this week-end with Gurvan Bontemps and Benjamin Amiot winning both races and the Flying Phantom Series Saint Malo 2015.

Franck Cammas: “I came to the raid des Corsaires to train on these foiling racing catamarans. They are not designed to perform offshore racing, but they are fast and it is a great opportunity to prepare my next competition: the Little Cup in Geneva next week that will be raced with C-Class catamarans. These three days of long distance racing with the top Flying Phantom teams were great.”

Next stop for the Flying Phantom will be the final act that will take place in Bermuda from the 29th of November to the 2nd of December 2015, co-organized by Phantom International and the Royal Bermuda Yacht club. An international fleet with more than fifteen Flying Phantoms will compete in the event. Boats coming from Europe, the USA and Canada, as well as from Bermuda, as Oracle Team USA and Artemis Racing have based their own Flying Phantoms there, will come together to enjoy 4 days of exciting racing on Bermuda’s Great Sound.