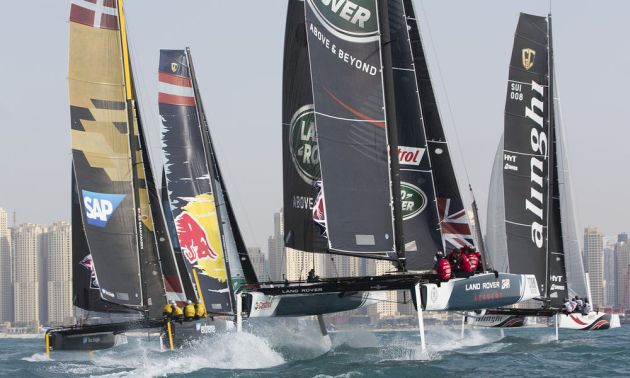 For the first time in its 10-year history the Extreme Sailing Series is set to go foiling as the 2016 season kicks off in Muscat in one week’s time. Eight teams from 14 different nations, return to the Almouj Golf Course in the heat of Oman from the 16-19 March for four days of intense battle.

The new season marks not just the introduction of foiling on GC32 catamarans, but also innovations in race format including a new coastal race and match racing, that complement the core proposition of the Series, its stadium racing format.

On the 16 March the boats will race in front of the historic backdrop of the Old Town in Muscat before returning, in a 20km coastal race, to Almouj, in the first race of this duration in Extreme Sailing Series history.

“2016 is a landmark year for us and Muscat marks the time when that transition will come together,” said Event Director Andy Tourell. “We have new boats, new teams, some new course layouts and some cracking venues, starting with Oman – now it’s time for the sailors to show us what they can do.”

With crews made up of elite level sailors, boasting 20 Olympic campaigns, 31 America’s Cup campaigns and 45 World Championship titles, the competition is set to be fierce.

Among the contenders will be returning champions Alinghi, skippered by Ernesto Bertarelli, looking to claim a third championship title. SAP Extreme Sailing Team, runners up in 2015, will be hunting for their first overall title, while the always-competitive Red Bull Sailing Team will be back with one of the most experienced skippers on the helm in Roman Hagara.

Following his success in 2015, Leigh McMillan, former skipper of The Wave, Muscat, will also be back on the water in Oman. However this time he will be on board with the Land Rover BAR Academy youth team crew, helping these talented youngsters, including skipper Bleddyn Môn, learn the ropes.

Starting the season on home turf, Nasser Al Mashari, previously a teammate of McMillan’s, races this year for Oman Air. He is hoping the local boat can excel in front of its home crowd. “Sailing on home waters in front of a Muscat crowd full of friends and family will be exciting and with a bit of breeze it will be spectacular for the public watching,” said Mashari. “The training event in Dubai last month was a fantastic opportunity to practice with the new Oman Air crew together, led by skipper Morgan Larson. We are a new team but we are a strong team with a lot of fight.”

For the first time in the Series’ history a Portuguese team, Sail Portugal, will be on the starting line, skippered by Diogo Cayolla. The team includes three-time America’s Cup sailor and current SoftBank Team Japan crewmember, New Zealander Winston Macfarlane, who will bring with him vast amounts of sailing knowledge and experience.

Returning for its second full Series, Team Turx will be led by co-skipper Edhem Dirvana and British Olympian Stevie Morrison. Morrison, who joins Team Turx as co-skipper and helm, having last year sailed with Oman Air, spoke about the opportunity to capitalise on the change of boat: “With the Extreme 40s the circuit was fairly well set as there were teams that had been four, five, six years in the making. Now it’s more of a level playing field with only a couple of teams coming in with the advantage of experience. We are ready to turn up in Oman as a blank canvas and learn. It is a great opportunity as there is going to be a near vertical learning curve.”

Neil Graham, Technical Director at OC Sport, says the new boats are going to be a challenge to even the most experienced Series crews. “The boats differ in both their handling and performance characteristics from what they are used to in the Extreme 40. The GC32s are smaller and lighter, they will accelerate and change direction quicker on the foils.”

Although some teams, such as Alinghi, already have the advantage of having completed a full season in the GC32, Graham still believes the Stadium Racing format will spring surprises. “Initially experience may be an advantage but what nobody knows is how the boats will perform in the unique stadium format of the Extreme Sailing Series. The short legs make the tactics in a foiling boat very different to any other form of racing. The stadium racing is almost a different discipline in itself,” he said.

The action starts on Wednesday 16 March with coastal racing in front of Muscat’s Old Town before the teams commence battle in the Stadium on Thursday 17 March.

The eighth and final team will be announced in the coming week to complete the starting grid. Fans around the globe can watch the racing live online on the official event website at the following times: