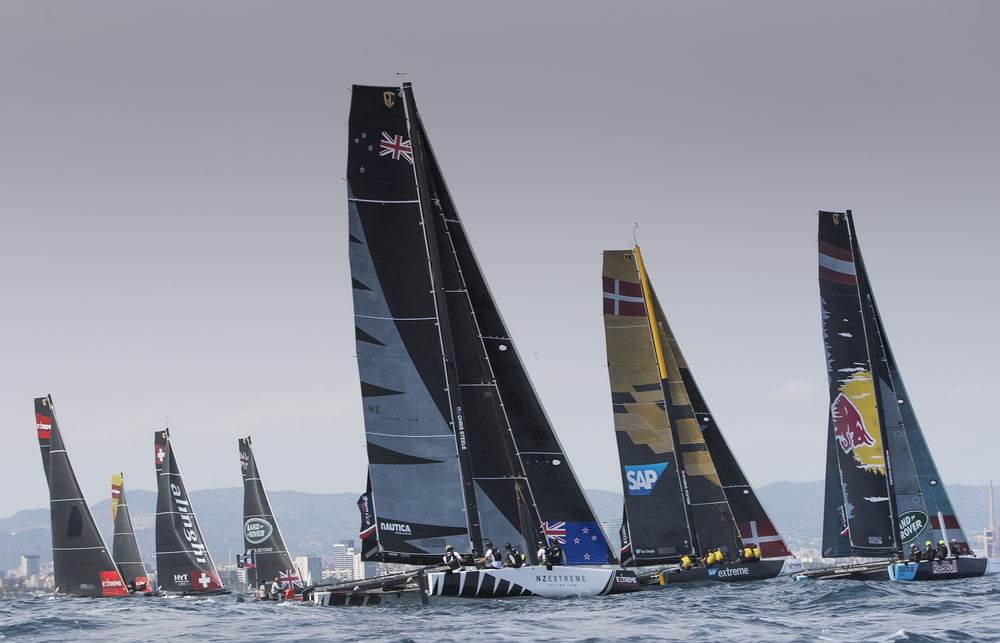 The fleet on Day 2 - Lloyd Images

A dramatic Act 4 curtain-raiser in Barcelona resulted in heartache for local wildcard crew, FNOB Impulse, when they were denied their first win right on the finish line – as Alinghi took control of the scoreboard.

Just as it seemed the young Spanish team, led by 23-year-old Jordi Xammar, looked set for their first ever Extreme Sailing Series™ race victory disaster struck when their GC32 catamaran got stuck on a buoy.

The watching crowds' hearts were in their mouths as Xammar and his crew, fresh from competing in the Red Bull Youth America's Cup, scrambled to dislodge their boat from the buoy's clutch.

Just as the chasing pack closed the gap Xammar's team broke free and turned their bows towards the finish line, but their lead had been wiped out.

A tussle with Chris Steele's NZ Extreme Sailing Team at the final turning mark ensued but Xammar's crew emerged just in front and heading for glory.

However in a cruel twist the Extreme Sailing Series on-the-water umpires intervened, penalising FNOB Impulse for impeding their Kiwi rivals.

Forced to complete two penalty gybes, Xammar and his crew could only watch as six teams slipped past them and crossed the finish line ahead.

The race ended with a tough lesson for the young Spaniards, who had to settle for seventh place, but also showed their potential for brilliance against much more seasoned teams.

“We made a big mistake in that race that we were close to winning,” conceded Xammar, one of Spain's most talented young sailors. “Obviously it's a beginner's mistake, but I think we can be happy if we're close to winning races on the first day of sailing here.

“We were happy because we had some good starts, good upwind legs, and we're looking forward to tomorrow. It's just amazing to be here in the Extreme Sailing Series.”

Meanwhile Series leaders Alinghi proved dominant as they notched up three wins, a second and a third in six light wind races off Barcelona's Barceloneta beach.

The Swiss outfit's strong starts proved vital as they soared to the top of the leaderboard going into the penultimate day of racing.

Red Bull Sailing Team rocketed out of the blocks to comfortably win the opening race, followed by three podium finishes.

But the Austrian team's scorecard also includes two last places, one of which was the result of the boat getting stuck on a racing mark and then the committee boat.

“It was actually quite a good day for us except for two races,” said skipper Roman Hagara, a double Olympic gold medallist. “We had a last and then in the other we hit the mark which was a misjudgement from my side. We were stuck on the mark and went from first to last which was a shame.

“I think we are doing well on the race course but it's hard with the swell and the light breeze but generally all going well. There were a few mistakes but we're looking forward to tomorrow.”

Land Rover BAR Academy finish the day in fifth place, two points ahead of Act 3 winners SAP Extreme Sailing Team, who were denied their first victory when the race they were leading was abandoned due to light winds.

Barcelona resident Mitch Booth's Team Extreme and Xammar's FNOB Impulse occupy seventh and eighth overall but with two more days of action to come there will be plenty of opportunities to claw their way back into contention.

The fleet of Flying Phantom pocket rockets made the most of better breeze earlier in the day to entertain crowds with some foiling action.