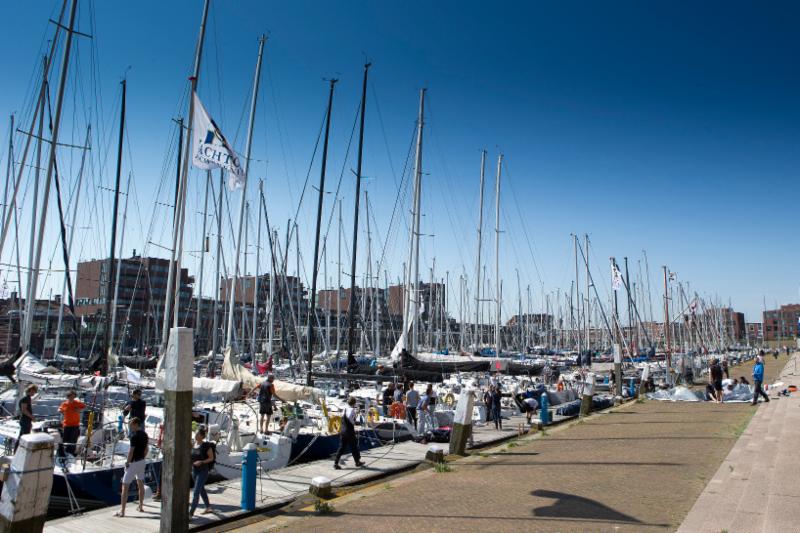 The Harbor at Scheveningen will be active before

The Hague, Netherlands – With the final deadline now passed for committed entries to submit their measurement and certificate data, The Hague Offshore Sailing World Championship is in final preparation for the fleet of 90 yachts from 15 nations to start the event. This fleet represents a diverse cross section of teams from around the world comprised of seasoned champions, newcomers and older production cruiser/racers, as well as brand new custom racing designs being sailed by professional crews and Corinthian amateurs.

“It's this rich diversity that makes this a truly World Championship that appeals to all offshore sailors,” said Bruno Finzi, a member of the International Jury for the event and Chairman of the Offshore Racing Congress (ORC). For the first time both ORC's rating system and IRC, the system used by the Royal Ocean Racing Club (RORC) and its French counterpart UNCL, will be used for scoring in this event, so all entries were required to be measured to have certificates from both systems. Use of these systems allows for boats of different types to race against each other under handicap in a week-long format of both offshore and inshore racing.

As the teams start assembling soon at Scheveningen Harbor, official activities start on Thursday 12 July with inspections of the fleet, a practice race and Opening Ceremony on Saturday 14 July, and the first offshore race starting on Sunday, 15 July. The length of this race will vary depending on the weather, but the first teams are expected to finish on Monday 16 July.

On Tuesday 17 July either offshore racing will resume, or the start of windward/leeward course racing will begin on two designated course areas off the beach at Scheveningen, with inshore racing to continue daily through Friday 20 July, and the Awards Ceremony and after party to follow that evening. A total of nine races are scheduled, two offshore and seven inshore. The teams with the lowest combined scores using ORC and IRC ratings in each of three classes – Class A, Class B and Class C – will be crowned the new 2018 World Champions, with prizes also awarded to teams with all Corinthian (amateur) crew.

The largest and fastest boats are entered in Class A, with ten teams from six nations entered. These include veterans of past ORC championships, such as the reigning ORC European Class A champion from Finland, Tea Ekengren-Sauren's Swan 45 Blue Nights, who earned their title last year in Gdansk, Poland, and also newcomers such as Karl Kwok's Team Beau Geste from Hong Kong. This 2015 Botin 52 design is the farthest-travelled entry at the regatta, and has been racing successfully in the USA and Australia. The team is composed of pro sailors from around the world, including team manager Gavin Brady from New Zealand.

“We're excited to be here for the Worlds,” said Brady, “and are impressed with the level of support given to us by the organizers for all that we've had to do with the details of shipping, commissioning, measurement and dockage.” Beau Geste raced the North Sea Regatta in May and showed strong performance potential in winning all but one of eight inshore races held in that event…and that race was won by Blue Nights.

“This will be our first Worlds and we're being very thorough in our preparation, as we expect this to be a hard fight,” continued Brady. Other contenders in this class include a late entry from Germany, Tillmar Hansen's Botin TP52 Outsider, which as Platoon won last year's TP52 World Championship, and will likely be a strong rival to be vying for the lead in every race with Beau Geste. Yet first to finish does not necessarily win the races, so Blue Nights, the Ker 46 Van Uden sailed by Gerd-Jan Poortman and members of the Rotterdam Offshore Sailing Team, and other well-sailed boat in this class may be astern of the fast 52-footers, but hungry (and capable) to win in corrected time.

In Class B there are 27 entries from 10 nations who will be racing in the same course area as Class A, some of whom are also proven winners from past championship events. These include Claus Landmark's Mills-designed Landmark 43 Santa from Norway, who led into the last day in the 2014 World Championship in Kiel and won the light-air 2016 World Championship in Copenhagen. They are one of three boats of this design entered from Norway. Frans Rodenburg's local-based First 40 Elke just won the North Sea Regatta in ORC/IRC Class 1, and Mati Sepp from Estonia is coming off racing at the ORC Italian National Championship and is racing his modified X-41 Premium at the Worlds. Premium and X-41 rival Xini Freedom from Finland finished respectively as the Bronze and Gold medalists at last year's ORC Europeans, so they will be in battle once again here in The Hague for the Class B World crown.

RORC Admiral Andrew McIrvine from the UK is a veteran of numerous offshore races around the world and will be entering his First 40 La Réponse to his first-ever World Championship event. “Having been heavily involved in getting this event off the ground I am more than delighted to be able to compete as well,” said McIrvine. “At last we are bringing IRC and ORC together, we have been sailing the same style of boats but held apart by the 2 rating systems. Both are excellent in their own way, even if one is much simpler than the other, and it will be fascinating to see how this combination works. People have been asking me how we can be bring the fleets to race together for more than 10 years – and at last we have done it!”

Class C may have the smallest and slowest boats in the event, but it does have the largest number of entries – 53 from 12 nations – and thus will have its own course area for their inshore racing portion of the program. This may also be one of the most contentious classes due not only to the size and diversity of this fleet, but the tremendous efforts made in pursuing the Class C Worlds crown. No less than four brand new custom boats from different designers and builders have been purposely built for this event, and along with optimizations made to existing boats by veteran teams, this may turn out to be the class to watch for tight finishes and close results.

Italian designer Maurizio Cossutti has designed and optimized numerous Class C World and European champions over the years and has some insightful observations about this fleet.

On the series-built production designs, Cossutti said: “We have many boats that I would say have 'known value' from being proven performers in past championships – for example Team Pro4u from Sweden (2-time ORC European Champions), the X-37 Hansen from Denmark, and the various Italia 9.98's entered. They are good all-around boats. And then we have the X-35 fleet, some of them modified that have proven to be very fast in medium light conditions in their standard configurations as we have seen in last year's Worlds, and in the recent Italian championship, and a bit less powerful, but extended range in the modified ones with larger appendages and higher displacement.”

Of other designs in the class, he says “The Waarschip 36 Hubo is interesting with a higher rating, it's lighter and with less sail area – it seems a bit similar to what we tried with our Next 37 design. We were not so successful, but maybe they have found a better balance. Other higher rating boats are Team Heiner's Maxfun 35, the J/112 J/Lance fresh off its victory at the IRC Europeans, the Judel/Vrolijk 36 one-off Night Shift…we will see.”

Of his own designs Cossutti says: “This year we have two good projects from Estonia: the refined Katariina seems very fast, especially upwind, also in the medium-light displacement area they have a very well-tested team [being 2016 ORC European Champions]. And the new Eesti Meedia, winner of Baltic Offshore Week is a bit heavier, but is fast in all conditions.”

Overall, Cossutti believes that regardless of design it will be the team with the best sailing talent that will win. “The races are won and lost by seconds, so it will be important to make no mistakes to remain competitive.”

Besides the action on the water, all participants and their families and friends will be treated to a large helping of Dutch hospitality off the water as well, with the HISWA Race Village offering many activities and attractions. The nearby Sport Beach has planned fitness activities, there are food clinics offered in the Race Village, a local school programme for beach clean-up will be held at the start of the event, and Kids programmes are scheduled Monday-Friday for 8-14 year-olds to learn about sailing, build their own boats, or just get out on the water in the Harbor and Paddle Challenges. For adults there are numerous activities in the Harbor Programme, as well as in the HISWA Race Village.