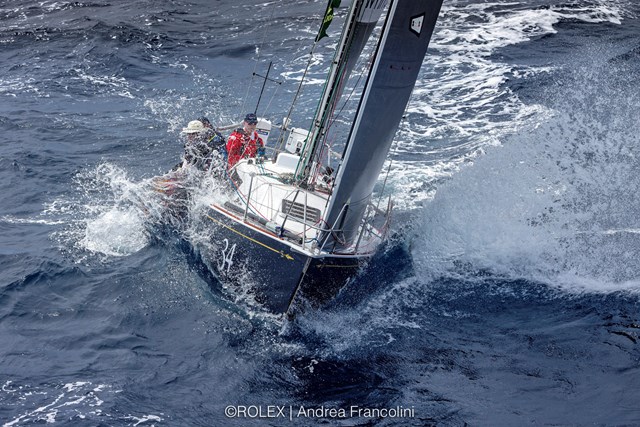 The toll of strong southerly winds and rough seas on the first night of the 2021 Rolex Sydney Hobart Yacht Race continued to mount, with 24 boats forced to retire by this morning.

A thrilling see-saw battle was still developing for Line Honours in the Cruising Yacht Club of Australia’s 628 nautical mile race between the first four boats, including the three 100-foot maxis.

Heading down the NSW coast, Peter Harburg’s Reichel/Pugh 100 Black Jack was leading. After spending most of the night sailing inside the rhumb line, Black Jack later moved outside it for the wind and current.

In second place was Christian Beck’s LawConnect, which was the first to pass the Green Cape Lighthouse, followed by the David Witt-skippered SHK Scallywag 100 further out to sea.

Speaking on board LawConnect, Ty Oxley said: “Last night wasn’t too bad, the breeze got up a bit and it was pretty wet for a while. We managed to get through.

“The biggest thing on these boats is slowing it down, so we slowed the boat down and managed our way through what we needed to get done and came out the other side.

“Everything is good on board, we’re sailing as quickly as we can and that’s the most important thing at the moment.”

In fourth place and to Black Jack’s port was the Grant Wharington-skippered Botin 80 Stefan Racing, which had really impressed with her speed against the 100-footers since the start.

In the battle for the Tattersall Cup, Rob Aldis’ Khaleesi, a DK46, sailed brilliantly to lead throughout the night from Shane Kearns’ White Bay 6 Azzurro and the Farr 43 Wild Oats., skippered by Brett Eagle.

The Two-Handed Division was being led by the Tasmanian entrant Sidewinder, an Akilaria RC2 sailed by Rob Gough and John Saul. In second place was the Victorian crew of Rod Smallman and Leeton Hulley on Maverick, a Jeanneau Sunfast 3600, followed by the Sydney entry Rum Rebellion, a J/99 sailed by owner Shane Connelly and Graeme Dunlop.

In their wake was a still tight fleet, but largely depleted in number. From 88 boats at the start, it had reduced to 64 by 8am due to southerlies that reached up to 30 knots, and rough seas.

Among the first retirements on Sunday was the Reichel/Pugh 69 Moneypenny, a Tattersall Cup favourite owned and skippered by Sean Langman, due to a broken forestay.

Two other retirements early in the night were Blink and Mako.

Owned by Mark Gorbatov and Mark Siebert, Blink was one of seven competitive Beneteau 40s in the fleet but retired with a torn main.

Mako, a Sydney 40 owned by Paul O’Rourke and skippered by Tim Dodds, withdrew due to a damaged main.

A series of retirements followed, with two of them due to minor injury.

Philip Turner’s Reichel/Pugh 66 Alive was the latest retirement by 8am due to hull damage. The boat, skippered by Duncan Hine, issued a Pan-Pan after taking on some water, but didn’t require assistance and all crew are confirmed to be ok on board.

To follow the race and for all information, please go to: http://rolexsydneyhobart.com/