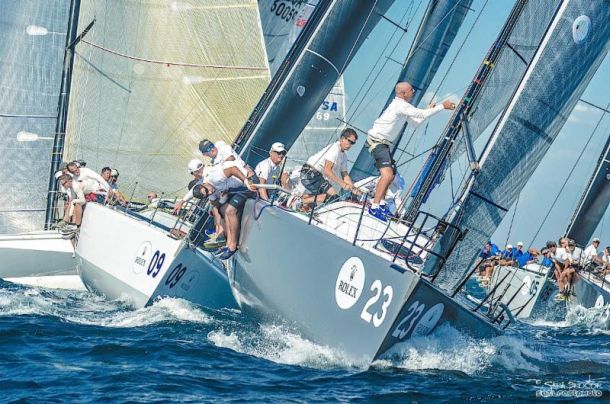 25/09/2015
With 8-10 knots of breeze, the first race started half an hour after it had been scheduled, but that did not deter Wolfgang Schaefer from making the best start from the boat end of the line and immediately tacking on to port to go right. His tactician, Francesco Bruni, had sensed the veering breeze, so that by the windward mark, after 1.3 miles, Schaefer's Struntje Light led by 26 seconds from Kevin McNeill's Nightshift. These two United States' boats were followed by the Turkish entry, Asterisk Uno of Hasip Gencer.

Downwind the two leaders stretched but into the mix came Gary Ezor's Coquille, one of the Corinthian entries, taking third place at the start of the second round. These places were held to the finish with the lone British entry, Tony Pohl's Twisted, moving into fourth place ahead of Helmut Jahn's Flash Gordon 6.

The breeze had veered 15 degrees before the second start, and the over-eager sailors were almost all too early and a general recall was evident ten seconds before the gun. The restart was clean and Alex Roeper's Plenty was soon in the van, and showed well clear at the first mark, where she was 18 seconds ahead of Asterisk Uno. With tactician, Terry Hutchinson, keeping an eye on the opposition, Plenty's skipper, Alex Roeper was able to increase his lead by a small amount on each of the succeeding three 1.4 mile legs. Helmut Jahn's Flash Gordon 6 was third.

At this stage, Plenty shared the lead with Nightshift, on 7 points, with Flash Gordon 6 third on 8. Struntje Light and Coquille were tied on 10.

The breeze had risen to more than 15 knots before the third race was started after the course had been reset once more. Asterisk Uno was the first to show, being able to tack cleanly on to port to head for the right in the veering breeze, but the shift came a little later when Flash Gordon 6 and Martin Hill's Estate Master were best positioned to maximize its advantage. They rounded the windward mark in the lead 12 seconds apart, and were not seriously challenged on the following three legs.

John Demourkas' Groovederci headed the chasing pack and consolidated third place in the race, which put him fourth in the overall standings after the three races in this no-discard Championship. Flash Gordon 6 leads with 9 points two ahead of Plenty with Nightshift third on 12.

There are three races scheduled for tomorrow and the Championship continues until Sunday.

Day 1 of the Rolex Farr 40 Worlds at Long Beach, California, was one of mixed fortunes for Martin Hill’s Estate Master; the lone Australian crew found themselves in sixth place overall, with a best result of second in the last race of the day.

Estate Master finished down in ninth in Race 1. Martin Hill explained: “The locals always go right, but we thought there was more breeze on the left, as did Plenty (defending world champion), Enfante Terrible (2013 world champion) and Flash Gordon. It was not a good decision by us, it was a shaky start.”

Race 2 rolled around and the breeze had increased by a few knots, with Estate Master fought back to eighth after a premature start.

“I think we covered more ground than anyone in that race, just getting ourselves back up to eighth,” Hill commented wryly.

“We can’t afford mistakes in this fleet at the Worlds, but we had to put it behind us,” Hill commented as they headed to the last race of the day.

By Race 3, the Australians felt at home when the usually flat seas became choppy as the wind strength increased to 12-16 knots. Hill and his crew, including five-time match racing world champion Ian Williams on tactics, fought back to finish second.

“We were happy – even Twirler (Darren Jones) was smiling. It was good to finish off that way,” Hill said.

Estate Master’s results initially left her in seventh place overall on 19 points, but following protest outcomes, most notably the disqualification of leader, Flash Gordon 6 (Helmet Jahn), moved the Australians into sixth place. Defending world champion, Plenty (Alex Roepers), is the new leader on 10 points, Nightshift (Kevin McNeil) is second on 12 points, and Groovederci (John Demourkas) is third on 14 points. All three are representing the USA.

“It wasn’t the best start for us, but I have my heart in winning the Worlds,” Hill said after racing. “The boat and the people can do it.

“We recovered in the last race; we have to look forward now. Enfante Terrible (Alberto Rossi, ITA) had a shocker too and are five points behind us. And as we all know, things can change dramatically in sailing, so we are staying positive.”

Racing continues at the Rolex Farr 40 Worlds tomorrow and ends on Sunday. A maximum 11 races are scheduled for the series and racing is due to commence shortly after midday each day.

Since the inception of the Farr 40 Worlds in 1998, only three Australian yachts have won. John Calvert Jones (Southern Star) won at Rhode Island in 2000, while Richard Perini (Evolution) in 2005 and Guido Belgiorno-Nettis (Transfusion) in 2011 won on home soil off Sydney.

Estate Master is one of 17 boats from six nations entered for the Rolex Farr 40 Worlds and Pre-Worlds which are being hosted by the Long Beach Yacht Club.