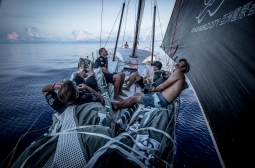 When the Volvo Ocean Race fleet first encountered the notorious Doldrums as they raced through the Atlantic between Lisbon and Cape Town on Leg 2, they breezed through with minimal disruption.

On the eighth day of Leg 4, it seemed the Doldrums were making up for missed opportunities earlier in the race by refusing to relinquish their grip on the seven teams currently ensnared in painfully light winds and blistering heat.

For three days now the crews have been solely focused on getting north as quickly as possible so they can lock into the consistent trade winds that will fire them towards Hong Kong – but the race has been slow going.

The wind has been almost non-existent, reducing average speeds over the last 24 hours to as little as three knots, while the air and sea temperatures have risen to uncomfortable levels. The only respite to the flapping sails and glassy seas is when a cloud appears – and then the temporary breeze it brings can be friend or foe.

The excruciating conditions have left the fleet flummoxed.

“It’s hot and slow,” said Jens Dolmer, boat captain on second-placed Team Brunel. “It’s been frustrating – we’ve done under 100 miles in 24 hours. During the day it’s very, very hot with no breeze at all. It saps your energy completely.”

The fickle nature of the Doldrums has seen most teams make gains and losses. At one point it seemed that those teams more to the east – Vestas 11th Hour Racing, Dongfeng Race Team, team Akzonobel and MAPFRE – had got a jump on Turn the Tide on Plastic, Brunel and Team Sun Hung Kai/Scallywag to the east.

But by the next position report the westerly boats had pulled back the deficit and drawn level once more.

The real winners in the past 24 hours has been Scallywag, who have managed to reduce a gap of more than 30 miles to around 10.

In fact the 1300 UTC update placed them top of the rankings due to their westerly position, technically closer to the finish line, their home port and scores of waiting fans.

“We’ve made gains on the fleet as the fastest boat, going a whole four knots,” Scallywag navigator Libby Greenhalgh said. “We’ve probably got another 250 miles of this light stuff, and at the moment we seem to be wiggling along quite well. If we can keep making gains and get ourselves level with the others then we’re in with a shout.”

Despite what the rankings say, the smart money remains on the team that can hit the trade winds lying some 250 miles north first – and jump on the highway to Hong Kong.