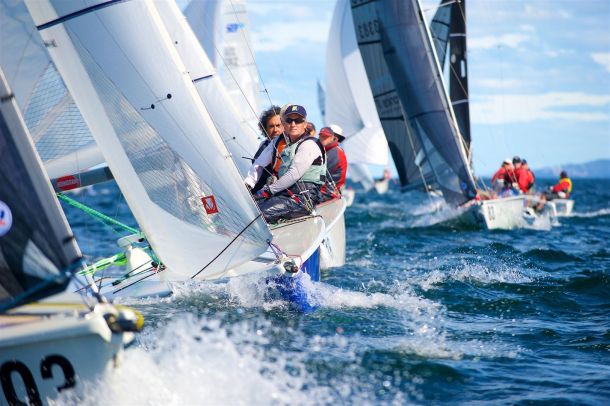 Tasmania’s Michael Cooper (Export Roo) and Queenslander Glenn Bourke helming Rob Jeffrey’s Red go into the last day of racing neck and neck. In stunning weather conditions on the River Derwent, Cooper and Bourke played seesaw at the top of the leader board today.

The Derwent Sailing Squadron’s PRO Nick Hutton predicted variable winds on the River and after a one hour postponement, Race Five finally got underway in a north westerly breeze of 20 – 25 knots.

The first race of the day saw the fleet split but the winners on the first beat were the skippers who took their boats to the left of the course. First home was Michael Cooper (Export Roo) in 34 minutes and 19 seconds, with Glenn Bourke (Red) in second followed by Tasmanian Rob Gough (Ciao Baby) in  third.

Race Six was not without its dramas with a general recall, a black flag general recall, and finally a clean start on the third attempt. Hometown SB20 sailing identity Nick Rogers (Karabos) took advantage of the stiff 15 – 20 knot north westerly breeze, fending off Rob Gough (Ciao Baby) by only 4 seconds to take the race, with Glenn Bourke (Red) in third.

Bourke was all class in Race Seven ahead of popular Victorian sailor Stephen Fries (WYSIWYG V) and Rogers again in third. The final race of Day Two was all Bourke, with Rogers (Karabos) picking up second and Cooper (Export Roo) taking third.

Bourke credits his good fortune in this regatta to responding well to the shifting conditions and to his crew’s relaxed approach.

“We are really in the groove in this regatta. We are sailing quite well, and the rewards are good for conservative, clever sailing. Whoever does that tomorrow is likely to carry home the winner’s trophy,” said Bourke. “We got off the start line today much better than yesterday and today we used the shifts quite well – shifts always provide opportunities in a race.”

While Bourke is noticing the different feel of the cooler winds compared to the winds of Hamilton Island, he and his crew have their head around how to respond.

“The trick is to set the boat up in a more de-powered way, this has definitely been key for us, said Bourke.

Local sailing identity Hughie Lewis (Nautilus Marine) caused a stir on the course in Race Eight (and in the Clubhouse afterwards) following his successful fishing trip which saw him land the yellow mark!

The final race also saw some thrills and spills on the finish line with David Graney (Wedgewood) also the talk of post-race discussions regarding his amazing ability to stay on-board his SB during some very hairy sailing.

Australian SB20 Class President, Rob Jeffreys is impressed with the exemplary level of sailing and the hospitality of the Derwent Sailing Squadron and the SB20 Australian fleet.

“From everyone on the course, in the Club to the guys in the yard, the hospitality has been overwhelming.  It is much appreciated by all of the interstate competitors – the hospitality is second to none,” said Jeffreys.

The series score heading into the final day of racing is Bourke (Red) at the top of the table on 11 points, Cooper (Export Roo) in second place on 16 points followed by Nick Rogers (Karabos) on 29 points. Alice Grubb (Big Ted) and Diana Reale (Realemedia) took out first and second place respectively in PHS to cap off a fine day of sailing on International Women’s Day 2015.