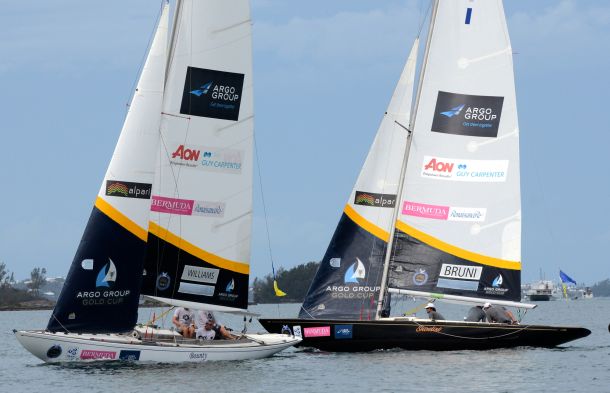 London, UK (29th September 2015): With Bermuda being home to the 35th America’s Cup, on 6-11 October, 16 skippers will once again be fighting it out to win another of match racing’s most prestigious events, the Argo Group Gold Cup.

However while competitors will be focussing on getting their name on the giant King Edward VII Gold Cup trophy alongside many of the greats in our sport, they will also be keeping one eye on the overall championship points for the 2015 World Match Racing Tour. The Argo Group Gold Cup is the penultimate event on the Tour and competitors in Bermuda will be gunning to get a good result enabling them firstly to make it through to the seasons’ grand finale, the Monsoon Cup, to be held in Johor, Malaysia in January, and secondly how points earned in Bermuda will impact their overall results.

This year the World Match Racing Tour has expanded with the addition of ‘World Tour Events’, joining the six regular Tour events, now known as ‘World Championship Events’. So now each of the ‘World Championship Events’ scores 35 for a win, 31 for a second, 28 for a third and so on, while the larger array of ‘World Tour Events’ score around half that – 18 for a first, 16 for a second, 14 for third, etc.

Across the season competitors get to keep their top three results in the knowledge that the top six teams on the Tour leaderboard, and probably the top eight, will get a place at the Monsoon Cup. Those that do get to race in the grand finale in Malaysia, are obliged to count their performance there, it becoming a mandatory fourth result in their season’s score line. For doing well in Malaysia not only earns event prize money but part of the US$ 440,000 prize purse for the 2015 championship season.

From a World Match Racing Tour perspective, the Argo Group Gold Cup is significant because it is the last chance for competitors to scramble for points in an attempt to improve their Championship scores going into the Monsoon Cup. This means different things for different teams, with several trying to put a third result on the board for this season, while others are merely attempting to improve their existing scoreline.

For example in the latter camp, Ian Williams and his GAC Pindar crew top the World Match Racing Tour leaderboard going into the Argo Group Gold Cup, counting a 2-2-3. So they need to finish in the Finals in Bermuda to improve their already just-short-of-perfect scoreline. Similarly Bjorn Hansen’s Nautiska Racing team is counting a 4-1-4, leaving the Swedish team in second overall, five points adrift of Williams and needing a top three result if they are to build their score.

However a top result in Bermuda is much more crucial for Taylor Canfield and his US One team, currently third overall. He, along with Kiwi Phil Robertson’s WAKA Racing, Australian Keith Swinton’s Black Swan Racing plus Stena Sailing Team's Johnie Berntsson this season have only scored results at two events. Because of this they are all obliged to count their Argo Group Gold Cup results, wherever they finish. And a good result in Bermuda for these teams will make a big impression on the leaderboard. If, for example, Canfield and Williams end up in the final in Bermuda and the US Virgin Islander wins, then he will move into pole position on the 2015 World Match Racing Tour leaderboard, two points ahead of Williams. Berntsson in particular has high expectations being the Argo Group Gold Cup defending champion, albeit going into the Tour’s Bermuda stopover in a lowly 13th place.

Because a good result in Bermuda is crucial for this group it also makes them vulnerable, as Tour Director Craig Mitchell observes: “If say Ian [Williams] wins Qualifying, he could pick Taylor [Canfield] to sail in the Quarter Finals and try and knock him out. That could leave Taylor a long way adrift overall in the Championship.”

Moving down the leaderboard, the next group is indicative of how the new format World Match Racing Tour is working. Unlike the previous group, these younger teams have sailed many more events and have gleaned points wherever they can including World Tour Events. For example, in fifth place, New Zealander Reuben Corbett is using his third place at Szczecin Match Race in Poland in his score line, while Kiwi Chris Steele in eighth, is counting his victory at the Ficker Cup (the Congressional Cup qualifier).

Compared to the previous group all of these teams are like Williams and Hansen in that they are already counting three events. For them the Argo Group Gold Cup is a chance to improve upon their weakest result. Eric Monnin in particular has a lot to gain. The Swiss skipper reached the Finals at the Argo Group Gold Cup last year, but with his present tally, all he needs is to finish seventh or higher enabling him to discard his current weakest result.

As James Pleasance, Executive Director of the World Match Racing Tour observes: “The Argo Group Gold Cup is all about skippers closing the gap to the leader to give them the best chance to win the overall world championship. It will be very interesting to see if any of the younger teams can step up to the plate and get on to the podium in Malaysia in January.”

Practice sessions for Argo Group Gold Cup run on Monday 5th October with Qualifying on 6th and 7th October. Knockouts start on 10th October with the Final schedule for 1400 on 11th October.

Stay up to date with the event as we bring live race action via Twitter on @wmrt_liverace and regular updates on @worldmrt from Bermuda. Follow us on facebook.com/worldmatchracingtour to get the latest news, event updates, behind the scenes and information of the Argo Group Gold Cup.