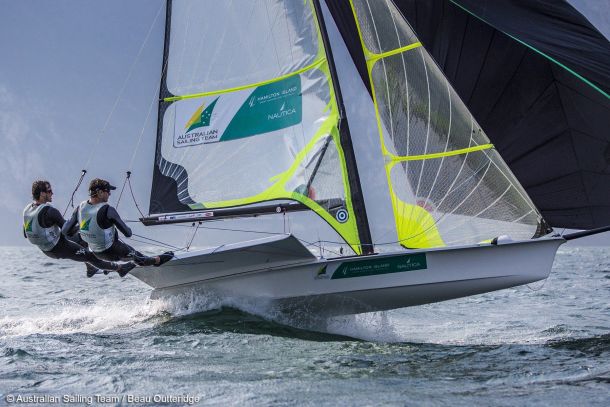 Matt Wearn had been the leader of the 112-boat Laser fleet over the first two race days, before he dropped down a couple ranks in lighter breeze. In the Medal Race he lost his bronze-medal position and slipped down into overall fifth after finishing the race in ninth.

“After rounding the top mark in first on the first lap, things went backwards pretty quickly. I went from being in a position to win a bronze medal to ending the race in ninth, meaning I slipped down to fifth overall. It was not the end I was hoping for to what was a solid week, but it proves again how tight the racing is in the Laser fleet,” Matt Wearn said after racing. “Garda is a less important regatta in the overall scheme of things for us and I’ve been winding down a bit after Hyères, which was the first event of the European season for us to peak for. But overall it’s been a good week to work on a few things that I was lacking in Hyères and to try out new gear.”

Australian Sailing Squad’s Euan McNicol (NSW) and Lucinda Whitty (NSW) finished the regatta in overall tenth place in the Nacra17. The pair had to miss a couple races due to some material damages, but managed to qualify for the Medal Race in which they finished fourth.

In the 49er, Australian Sailing Team’s David Gilmour (WA) and Rhys Mara (VIC) moved up the ranks over the week and finished the regatta tenth. Teammates Joel Turner (QLD) and Lewis Brake (QLD) just missed out of the medal race and finished in eleventh place overall.

In the 49erFX Australian Sailing Squad’s Haylee Outteridge (NSW) and Sarah Cook (NSW) kicked-off their European season with a 12th place. The pair used Garda as a test event before they will now head to the Delta Lloyd Regatta, where they aim to qualify for the ISAF Sailing World Cup in Weymouth.

“It’s been great to finally start racing in Europe and we had a great week of learning. It was good to race in a range of conditions here in Garda and we’re looking forward to Delta Lloyd Regatta next,” Haylee Outteridge said.

Laser World #1 Tom Burton decided to pull out of racing after day one to prioritise some general recovery treatment at the Australian Institute of Sport European Training Centre in Varese.

While the event was a training regatta and not a priority event, Garda ranks highly amongst Australian Sailing’s athletes as popular location and event for training and cross training as Matt Wearn explains: “Garda is just a good place to be. It’s got a good vibe and you can do lots of things, go riding, windsurfing, not just sailing. And that’s probably a big reason for us to come here. We spend such a long time in Europe, so it’s good to come to such a beautiful place and break it all up with different kind of trainings.”

And about the things ahead he added: “I will have a bit of time off now, do Medemblik and ramp it up for Weymouth which should be a good lead-in to our World Champs in July.”

Most of Australian Sailing’s athletes will be heading to the Delta Lloyd Regatta in Medemblik, Netherlands (26-30 May) next. Medemblik will be the lead-up event to the ISAF Sailing World Cup in Weymouth, UK in June (8-14 June).

(Note: THE LAST number of the last race refers to the placings in the Medal race and not to the points as in previous races)

Garda Trentino Olympic week is the second leg of the EUROSAF Champions Sailing Cup series. The first took place in Palma, Majorca at the beginning of April. The European Olympic Tour is played out over 5 stages in Spain, Italy, The Netherlands, Germany and France.