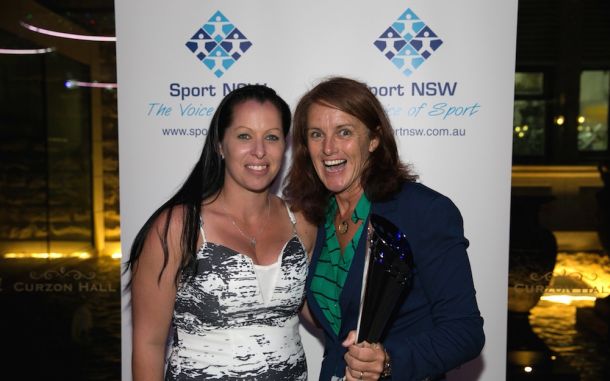 Fitzgibbon and Tesch were recognised with the Award for winning their first World Championship title in the SKUD-18 event at the 2014 IFDS World Championship in Canada last August. This win qualified Australia in the SKUD-18 for the Rio Paralympics and helped Australia win the Nations Cup for the first time. This win also earned the team the Sailor of the Year with a Disability Award at the 2014 Yachting Australia Awards.

“We’re very excited about receiving this award out of this high caliber group of athletes and congratulate all finalists on their achievements. It’s great to see our Paralympic sporting world continuing to grow and to have so many successful Paralympic athletes in our state and country,” five time Paralympian and four time Paralympic medallist Liesl Tesch said after being presented the award by Kim Thomson of Arthur J. Gallagher.

Both are multiple Paralympic medallists and strong advocates of Paralympic sport and are currently campaigning to get sailing reinstated in the 2020 Tokyo Paralympic Games after a recent decision of the International Paralympic Committee (IPC) not to include sailing on the Tokyo 2020 Paralympic Games sports programme shocked the international sailing community.

“I, like the rest of the sailing community, was completely stunned by the news that sailing has been excluded from the 2020 Paralympic Games,” Paralympic silver (2008) and gold medallist (2012) Daniel Fitzgibbon said about the decision.

“I have already visited Tokyo and inspected the sailing venue as have we invested considerable time and money in assets to be used for these games, so to say it took me by surprise would be an understatement,” he added.

“Sailing is the only Paralympic sport that allows Quadriplegics, such as myself, to compete against much more able athletes on an even and fair platform. And to take this opportunity away from future athletes like myself, or worse, is a very disappointing decision.”

The news was an enormous disappointment for the sport of sailing worldwide, in Australia and for Australian Sailing Team and Squad athletes who are working hard, not only towards Rio 2016, but also towards Tokyo 2020.