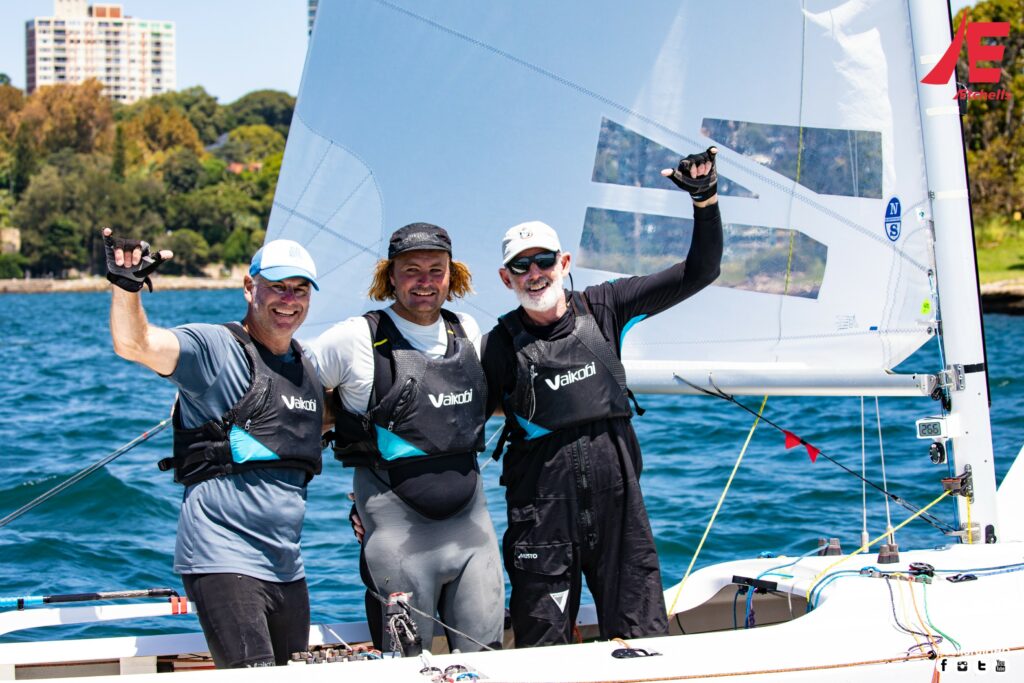 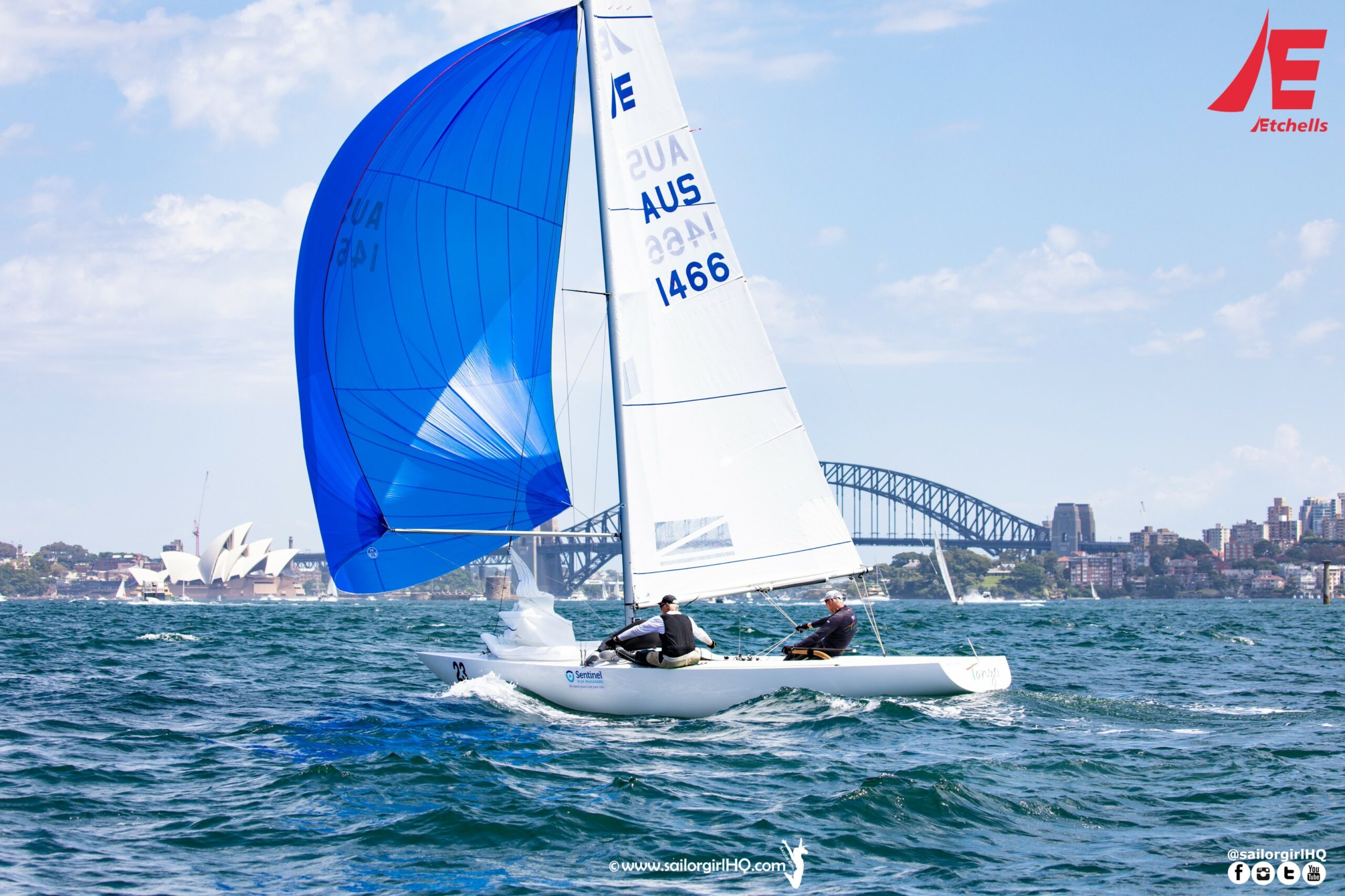 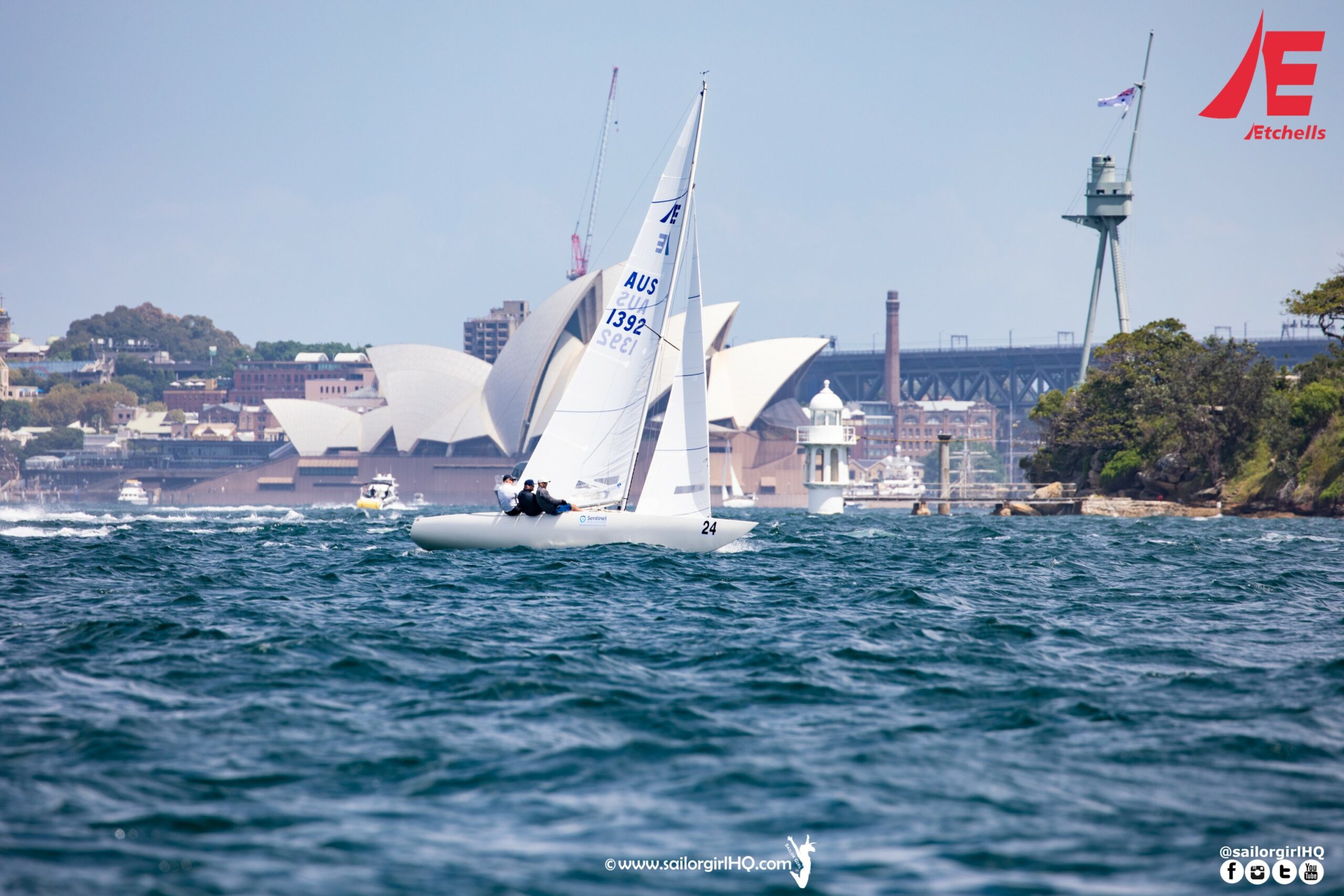 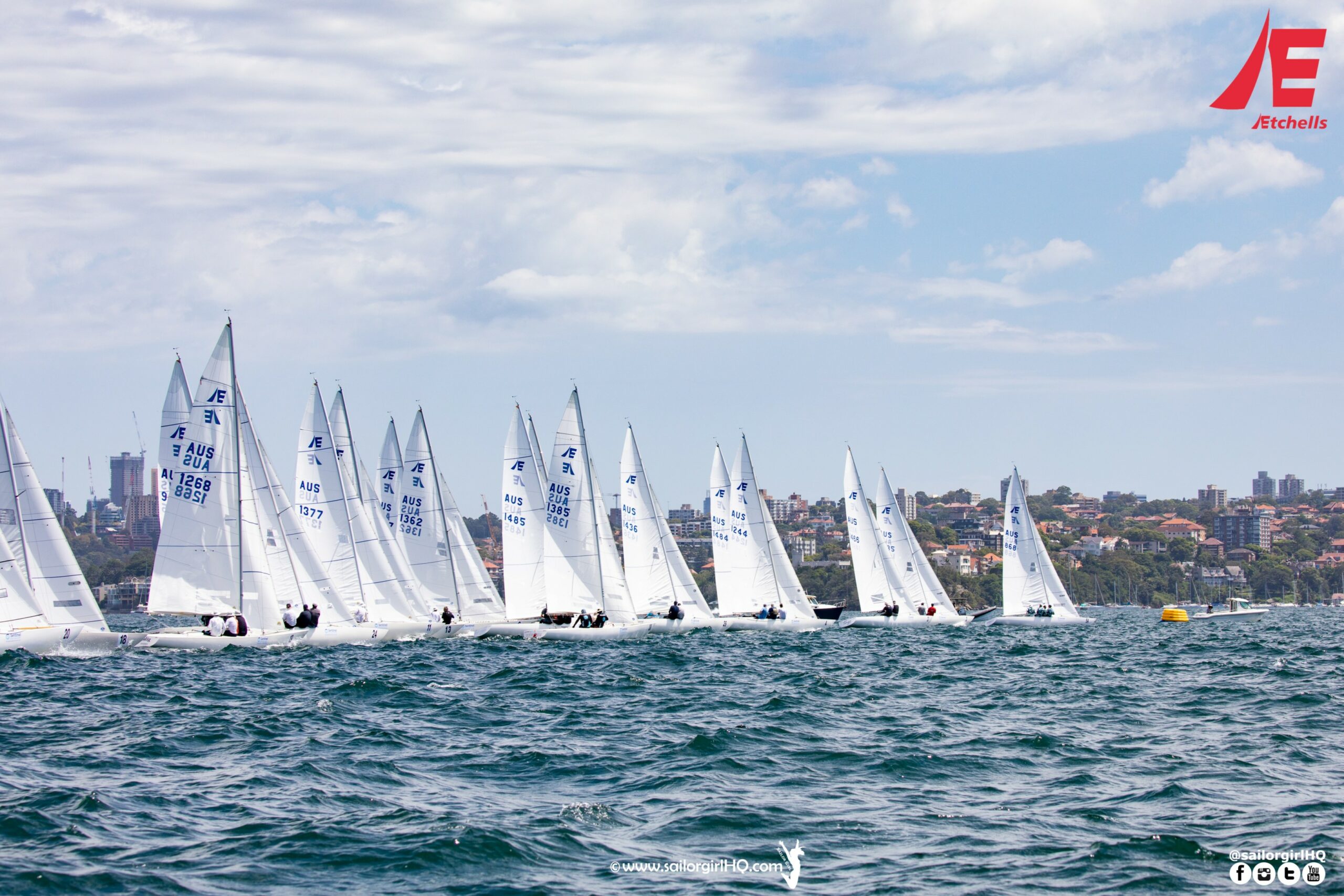 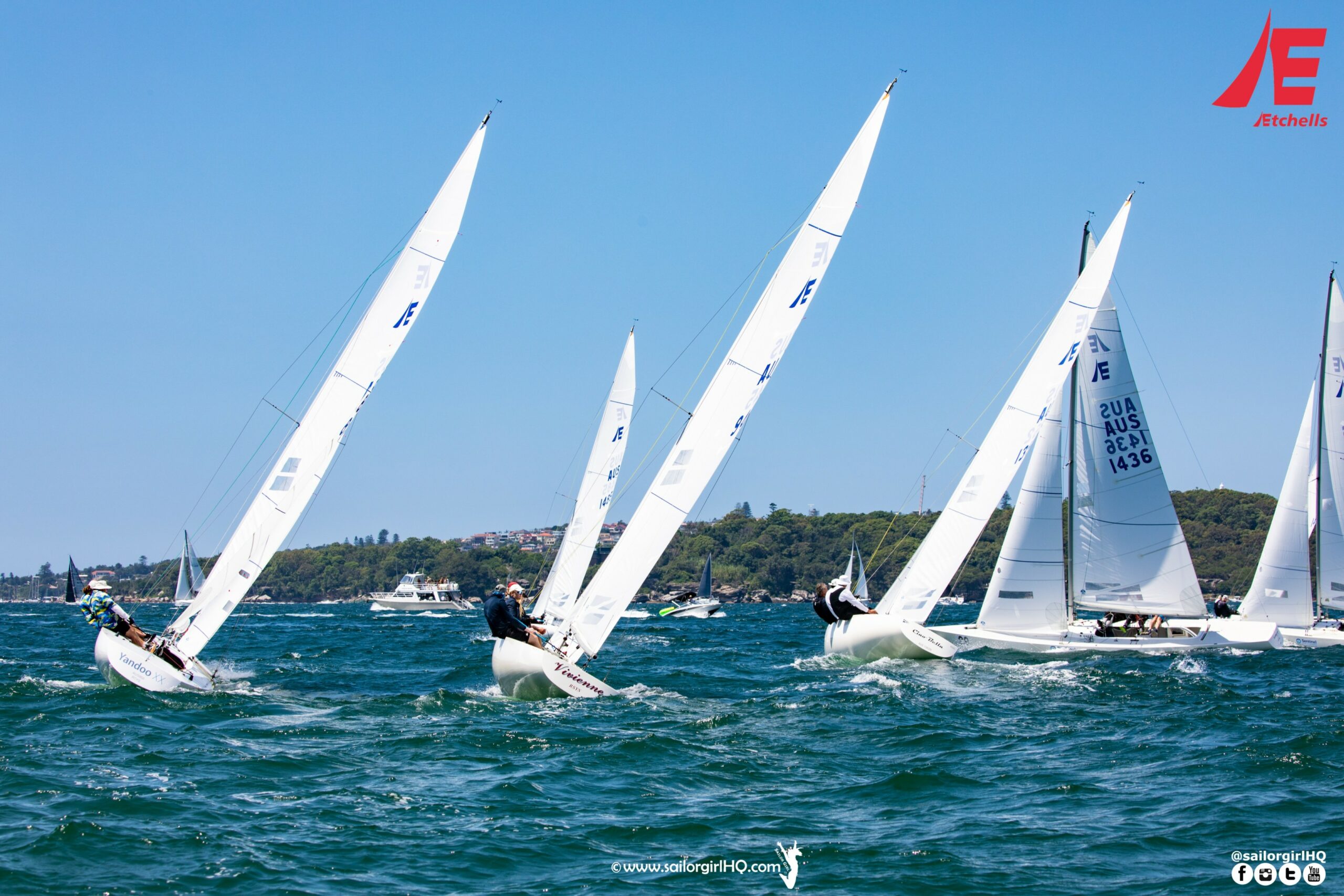 A bit of traffic along the shore in race eight. Pic - Nic Douglass @sailorgirlhq 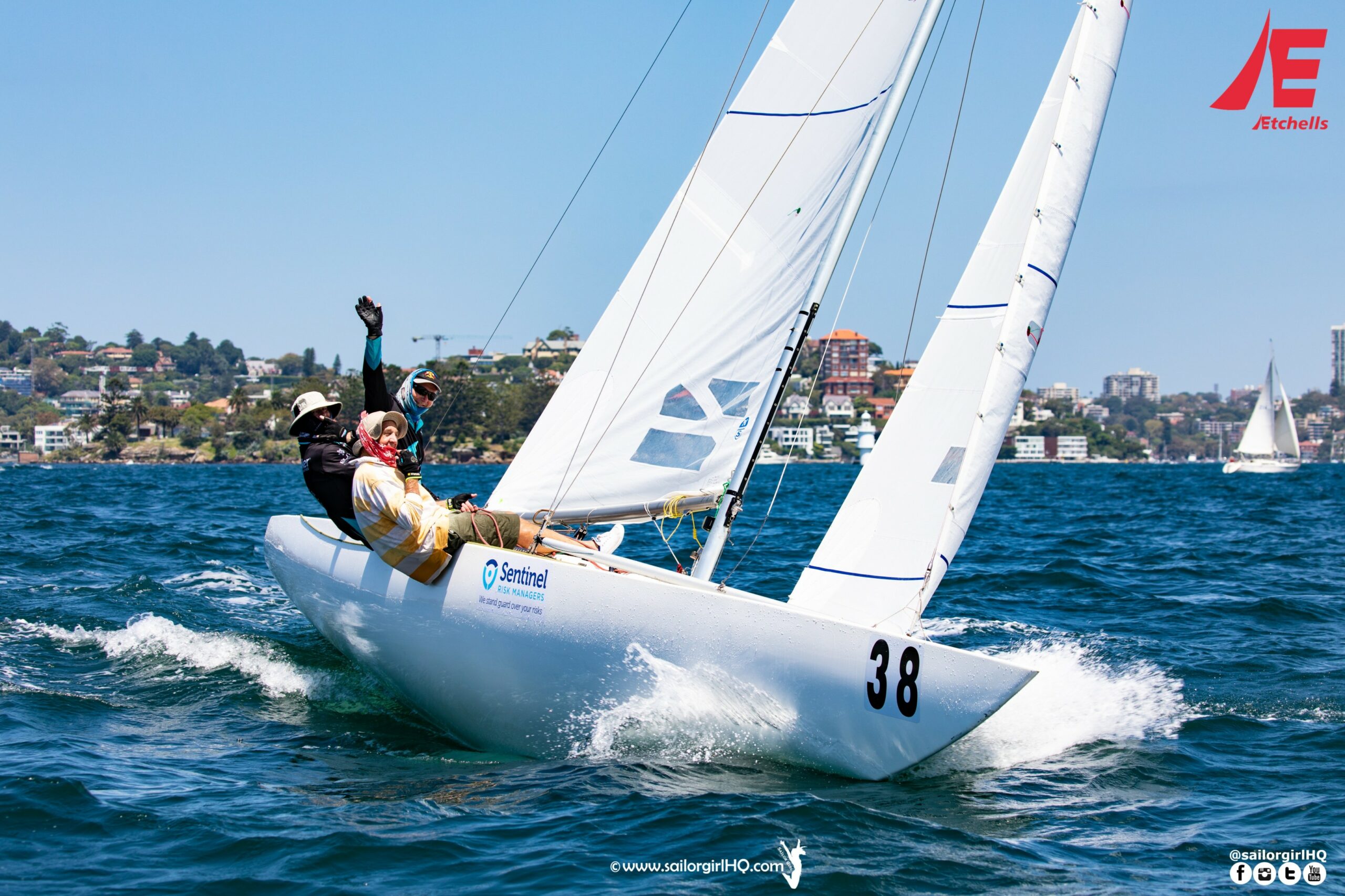 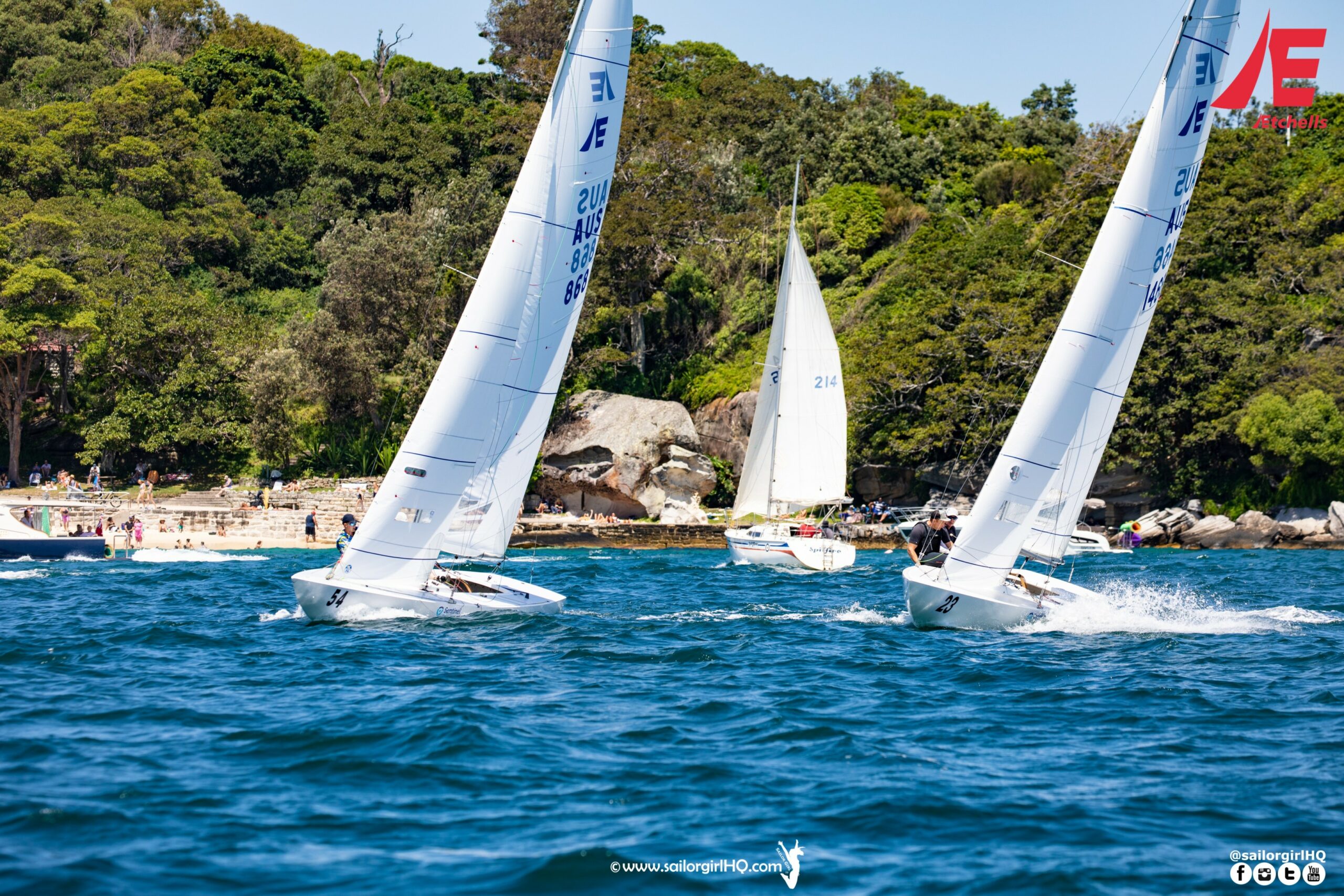 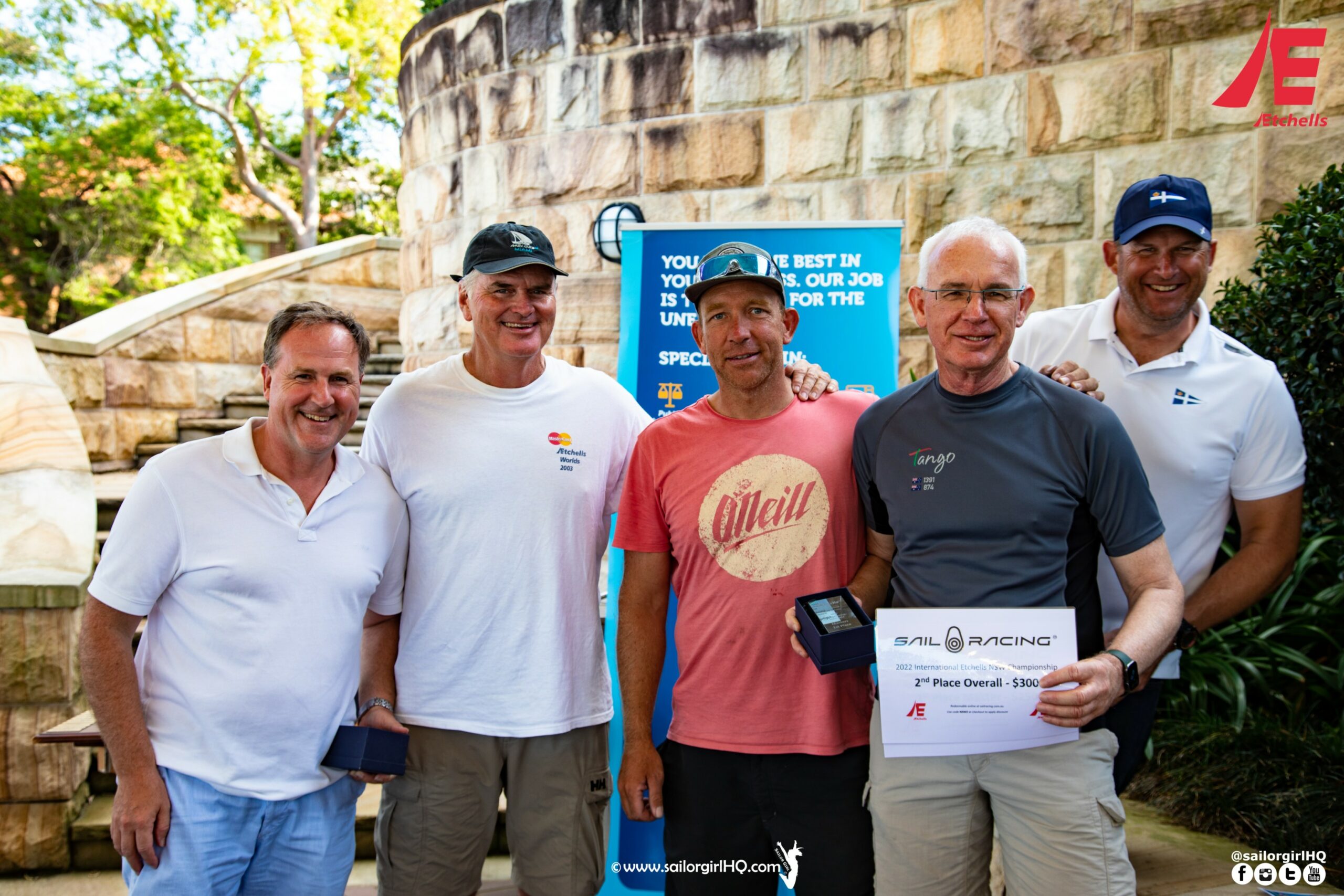 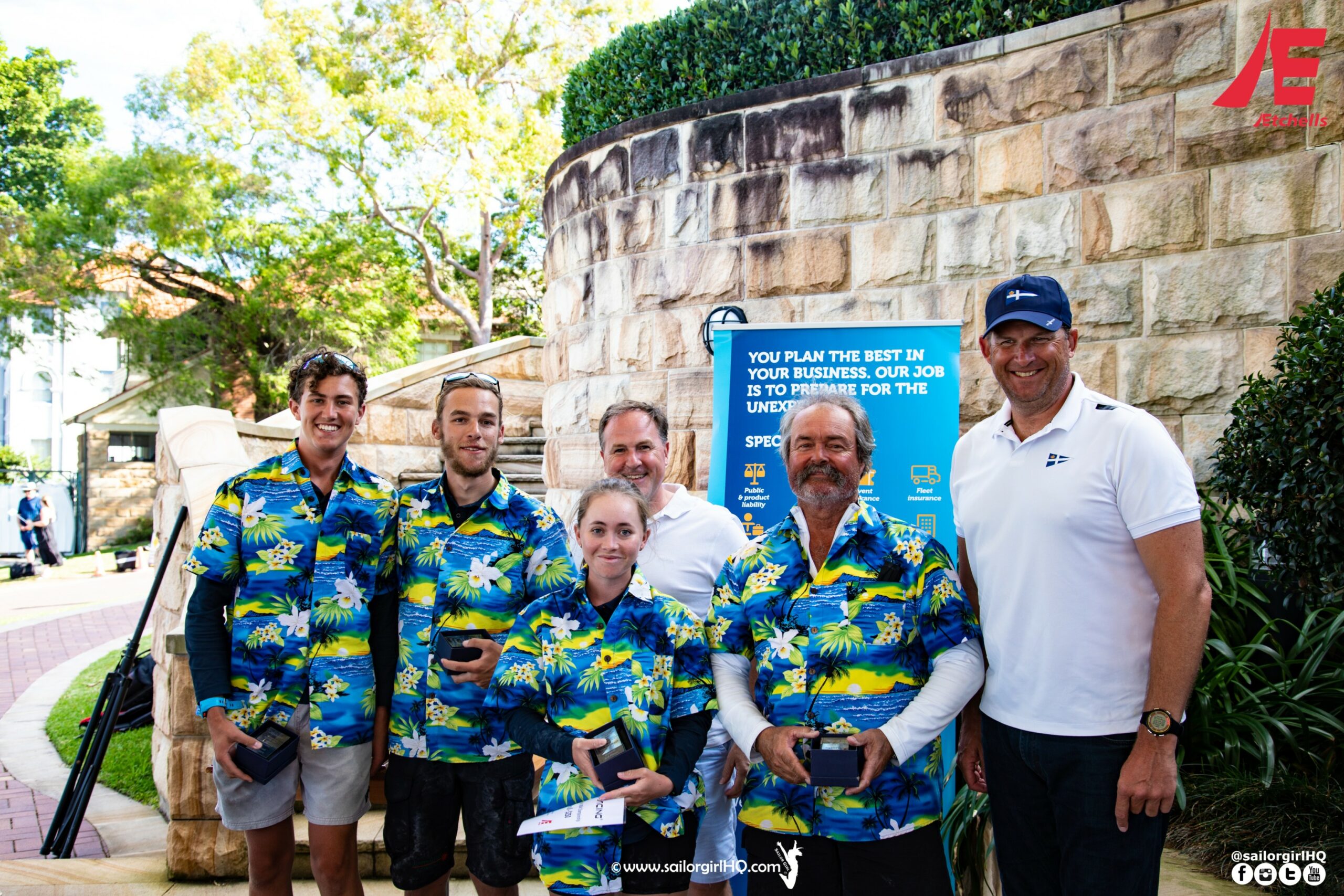 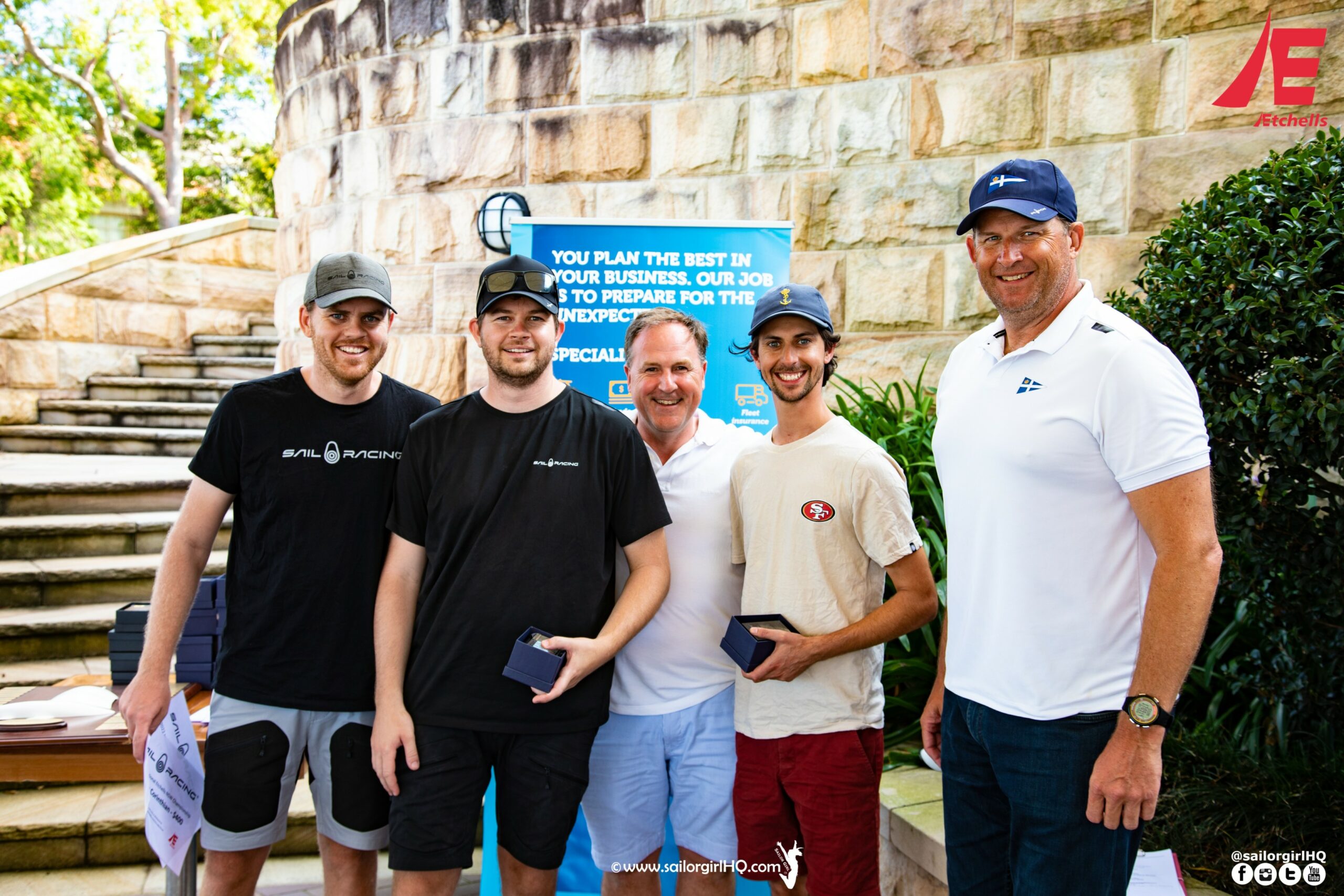 First Tracks AUS1485 skippered by Peter Merrington with Ian McKillop and Steve Jarvin (David Gilmour day one and two) have won the Etchells NSW State Championship from the Royal Sydney Yacht Squadron (RSYS) with a race to spare in the eight race series which included one drop.

Second after a strong close to the regatta was Tango AUS1466 (also first in the Masters division) helmed by Chris Hampton with Samuel Haines and Cameron Miles. And in third was Yandoo XX AUS868 skippered by Neville Wittey with RSYS youth squad members Kyra Early, Zac West and Jameson Prescott.

Corinthian and Youth Division winners (full list of prizes below) Flirtation AUS1026 finished in fourth overall. Rob Crawford, who sails with his brother Matt Crawford on the helm and Karl Bromfield, said, “Etchells are a great class, kind of reminds us of our 470 days -super technical, great racing. Thirty boats here this weekend, everyone is super close.”

“All through our junior sailing we have always looked up to most of these guys, it’s cool now to sail against them… every so often we get to beat them, and we also learn a fair bit off [from] them, they are always happy to help us when we come off the water. There are two other youth boats here who probably get a lot of help off those guys as well. It’s nice to go out there and try and beat your heroes,” he said of his experience in the Etchells class as a youth sailor.

The first Grand Master was Karabos AUS932 skippered by Ron Jacobs who has returned to the class after an absence, sailing with Simon Reffold and Andrew Cutler. “I had a little go on the Etchells back in 1993. I’ve been busy doing other yachting over the years so I thought I would get back in them, get back on the horse.”

“There are numerous world champions, last week we were racing against Olympic champions, when you have a good day you feel really elated,” said Jacobs of sailing in the Etchells class.

For the full video interview with Crawford and Jacobs showing some of the event highlights, see: https://fb.watch/biXpWq6urF/

Race seven, the first of the final day, started in a building nor’easter in an outgoing tide with a course axis of 45 degrees.

Yandoo XX AUS868 made the most of the pin end and headed all the way into Bradley’s Head before crossing the course to Steele Point to approach the top mark from the right-hand side. Tango AUS1466 started just to windward of Yandoo XX AUS868 and played the left hand side of the beat, and were narrowly in the box seat when the two sides of the course met at the top. Roger Perrett with Paul Gudmunson and Grant Crowle on Wobbegong 2 AUS1436 was also in the mix, rounding in third, with Christian Boillot, James Heywood and Philippe Charret on Tamm Ha Tamm AUS865 fourth and Flirtation AUS1026 fifth.

At the bottom, Tango AUS1466 continued to lead and Yandoo XX AUS868 managed to get mark room on final approach over Perrett’s Wobbegong 2 AUS1436, the first five including Tamm Ha Tamm AUS865 and regatta champions First Tracks AUS1485 who made big gains on the first run opting for the right hand turn to head back to the left, Flirtation AUS1026 took the left hand turn to clear their air briefly before heading back towards Bradley’s.

Coming into the finish it was Wobbegong 2 AUS1436 who just got the better of Tango AUS1466 from behind, there were centimetres in their finish a testament to the Etchells class. Third was Yandoo XX AUS868 with, fourth was Flying High 2 skippered by Jeanne-Claude Strong with Seve Jarvin and Sam Newton after overtaking two boats on the final run, and Flirtation AUS1026 held onto fifth.

The final race of the series, race eight also started in 45 degrees and most had identified the need to get to Bradley’s Head and onto the outgoing current elevator. It was high risk, however, with a few boats getting bound up in the traffic, including Yandoo XX and Flying High 2 who arguably had the best starts at the pin, but couldn’t find a way out, regardless of a big shift to the left, and ultimately a change of course on the second lap to an axis of 30 degrees.

The winning team First Tracks did find a way through on the first beat from a more conservative start three boats up from the pin, and were never headed in what was essentially their victory lap in quintessential Sydney sea breeze conditions.

Second across the line were Chris Hampton with Samuel Haines and Cameron Miles on Tango AUS1466 securing their second place overall and Masters win, and in third was Thelastone AUS1392 skippered by Steve Billingham with Sam Hamilton and James Arnold, which secured them the ‘half way’ in the fleet prize and a North Sails voucher.

“We were thrilled with the last race,” said Peter Merrington, skipper of newly crowned State Championship team First Tracks AUS1485. “We didn’t need to sail it but we really wanted to go out there and have a good day of sailing with Moth [Steve Jarvin]. We definitely had the boat moving,” he said after putting the regatta away without needing to sail the last race.

“We got a bit lucky, the seas parted and opened up for us, at Bradley’s Head, it could have gone the other way, but it opened up nicely for us and we got away beautifully. The two boats at the pin, just fell off the breeze, but I think we were perfectly lined up with the Lighthouse and that worked for us,” he continued.

“I have to pay tribute to my long-time crewmate Ian McKillop. We have had a seven-year partnership in Etchells. He is a very talented sailor, and other people come and go, but really he is the backbone of this team that has had so much success.”

“Unfortunately we can’t do the Nationals” he said. Iit’s a bit unfortunate not to defend the title, but good luck to everyone that is going, it should be a really good regatta.”

“We will be at Mooloolaba, that’s the plan, so we will be up there and we are considering the prospect of going to the Worlds in Cowes. We’re really hopeful and keen to see what we can do at that level.”

The class enjoyed a presentation on the back verandah of the beautiful Royal Sydney Yacht Squadron to wrap the event, with representatives from the supporters of the regatta, Sentinel Risk Managers, Sail Racing and North Sails as well as the class media sponsors Hill PDA.

“Congratulations to First Tracks and all who sailed well this weekend,” said Mike Tyquin the Sydney Etchells Fleet Captain in wrapping up the event.

“Particularly to Christian [Brook], Will Pettigrew and the whole team at the Royal Sydney Yacht Squadron… I really can’t say enough… there was a big effort from a lot of people who really pitched in to make sure that we got up and running this weekend, so I just want to make sure that everyone understands that,” he emphasised.

“All of you coming out and supporting the class the way you have, two weeks ago at the Goblets, this weekend, and in a couple of weeks in Metung is what really counts the most. The regatta was held in really good spirit, the weather is the weather, but I am really grateful to those who travelled, from Victoria, and the Gold Coast and the other fleets. Thanks very much for coming along, and attending and making the regatta what it was,” he concluded.

The next event for the Etchells class will be the National Championship sailed from the Metung Yacht Club in Victoria from 2-6 March. More information, see: https://metungyachtclub.com.au/sailing-regatta-documents/australian-etchells-national-championships-march-2022

For the full results, see: https://app.sailsys.com.au/club/2/results/series/1544/races