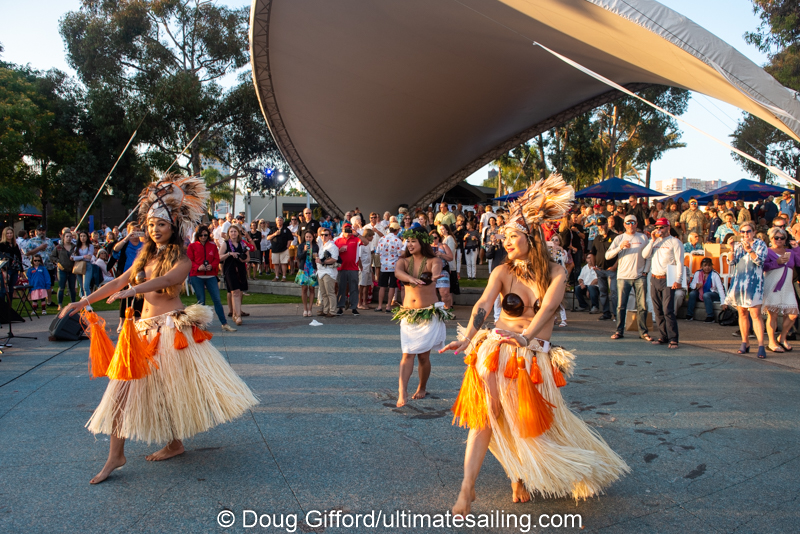 The Aloha Spirit was alive and well at the traditional Transpac Send-off Party on Saturday.

LOS ANGELES, CA – The first of three waves of 90 entries starts on Wednesday, July 10th in the 50th edition of the Transpacific YC's biennial 2225-mile race from Los Angeles to Honolulu. This record turnout will feature 33 monohulls between 33 and 67 feet in length scored in 5 divisions starting their journey on Wednesday at 1:00 PM PDT on a starting line set one mile south of Point Fermin in San Pedro. Two multihulls of 40 and 42 feet scored in one division will be also be starting on this day 30 minutes earlier at 12:30 PDT.

The next wave of racers will be setting off on Friday, July 12th also at 1:00 PM PDT from Point Fermin, and will include 27 monohull yachts between 35 to 73 feet in length. This group is divided and scored in three divisions.

And the last wave of starters is to be four multihulls of 63 and 70 feet in length scored in one division crossing the same line at Point Fermin at 12:30 PM PDT on Saturday, July 13th followed 30 minutes later by 24 monohulls between 40 and 100 feet in length being scored in two divisions.

These starts represent the last stage of what for some was a long journey in pre-race preparation, one that took not just many months in ticking boxes for compliance to safety and rating rules, but for some years in the planning and logistics. Skippers and navigators are required, for example, to have competed in a recent race of similar requirements, including the Pacific Cup, Sydney Hobart, Fastnet, Newport-Bermuda or any similar race, and the skipper, navigator and one watch captain is supposed to have sailed together in a race or passage of 150 or more miles in length on the boat they are racing together in Transpac.

Whether new to Transpac (and 75% are newcomers to the race this year) or grizzled salty veterans, all had a great time at the opening act of this year's race, the official Aloha Send-off Party held in the bandshell next to Gladstone's Restaurant in Long Beach. Welcome speeches were followed by plenty of live Hawaiian-themed entertainment, and many teams took the opportunity show their solidarity with their team's matching Aloha shirts.

Also on hand was Stephanie Betz, a co-organizer of next May's Tahiti-Transpac, who was gauging interest among teams headed to Honolulu for their interest to go “just a little further” to Tahiti next year. Stephanie reports solid interest from a few teams, adding to the seven already committed for this race of 3571-miles, first run by Transpacific YC over 90 years ago in 1928.

“In all we're really pleased with this fleet in Transpac 50,” said TPYC Commodore Tom Hogan. “There are some 775 men and women and boys and girls sailing west over the horizon this week, heading to Honolulu on 90 boats of all sizes and types. This shows to us great interest in not only Transpac, but in ocean racing as well.”