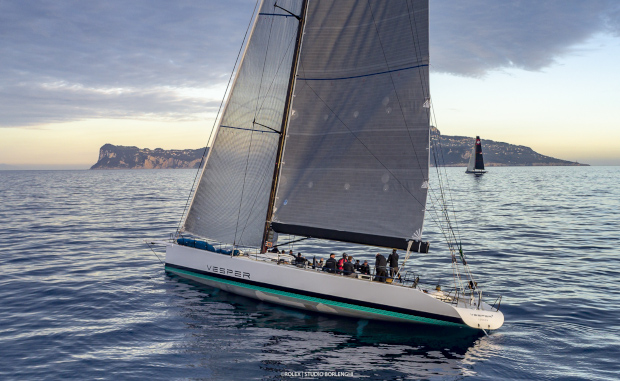 Second oldest in the Italian yachting calendar to the Rolex Giraglia, this 155 mile offshore race has incorporated into Rolex Capri Sailing Week since 2017, forming a prologue and feeder race to the inshore races that start on Wednesday for the maxi boats.

Organised by the CRV Italia, the course takes the boats northwest from Naples, around the island of Ponza before returning southeast, where the boats can leave Capri to port or starboard before rounding the Li Galli islands off the Amalfi coast, then returning clockwise around the south side of Capri to the finish off Marina Grande.

Nine 60+ft yachts competed in the Regata dei Tre Golfi’s Maxi class and there was a particularly competitive fight from the outset between the longest boats – Vesper, the maxZ86 chartered by American Jim Swartz, the Maxi 72 Caol Ila R and Jethou, Sir Peter Ogden’s elongated Maxi 72, now 77ft LOA. Following the midnight start this trio escaped the busy start area the fastest with Vesper leading Caol Ila R and Jethou out of theGulf of Naples. Their advantage swiftly grew to around nine miles when the chasing pack was becalmed just north of Ischia.

On the way to Ponza the boats were upwind with the race for the front seeing Caol Ila R, the defending line honours and handicap winner, neck and neck with Vesper, having just edged ahead of Jethou as they crossed the gate around the island of Ventotente. The wind disappeared again across the fleet as the frontrunners were half way to Ponza. The lead trio then again made painful progress taking most of Saturday morning to round Ponza. Here Caol Ila R and Vesper made their break from Jethou who’s deficit increased from 1 miles to three miles before she was able to escape the island’s clutches.

Mercifully the run back was in more stable breeze and the frontrunners were able to lay the south side of Ischia in one. This they passed at around 1700 Saturday, the on the water race was still open between Vesper and Caol Ila R but by this stage Jethou was trailing by more than six miles with Wild Joe leading the next wave, her deficit now up to 19 miles. But come Saturday evening and the tables turned once again as the lead duo were becalmed north of Capri, as those astern came in with pressure: Caol Ila R pulled out a small advantage over Vesper but then at 1930 parked up and within an hour Jethou was back to within 0.5 miles.

The most interesting tactics at this point were those of the newly DSS-equipped Wild Joe which went south of Capri. This tactic reaped huge dividends, the Hungarian mini maxi sailing a 10% longer course but in much better breeze. At around 2200 Caol Ila R managed to make her decisive break away from her group, as Wild Joe converged, for a moment pulling up to second on the water.

Caol Ila R rounded the Li Galli mark at midnight, followed around an hour later by Jethou, Vesper and Wild Joe. Aside from a small stop off the northwest corner of Capri, Caol Ila R secured her second consecutive line honours victory, finishing at 02:36:25 on Sunday morning, followed by Vesper at 03:04, Jethou at 03:09 and Wild Joe at 03:28.

“I am very happy,” declared Caol Ila R’s Swiss owner Alex Schaerer. “Last year it was a bit more consistent all of the way. This time it was still a nice race. We reckoned we would finish by around 0100 but you always lose more on the corners than the computer tells you.”

Like most of the boats, Caol Ila R raced ‘light’ with only 14 crew rather than 20 on board and leaving heavy weather sails behind. While they saw 12 knots briefly, the average was around six and there were prolonged periods of less than three. Schaerer reckoned around eight were ideal – less or more and their larger canting keel opponent Vesper would have seen them off.

One of Caol Ila R’s secret weapons was bringing board Italian former America’s Cup skipper Francesco de Angelis. “I rather think it was more a case of not losing the race, than our winning it,” he said. “It was pretty tricky from the beginning and each corner was tough, especially at Ponza. There are lots of tall islands with wind shadows and you can stay out or stay in – there is no playbook. The team did very well. There were tons of sail changes to keep the boat moving all of the time.”

Navigator on board was Will Oxley. He added: “On the way out to Ponza we were expecting some light bubbles of air and Vesper got caught in one of those and we rolled up to them, tacked and then extended on them,” He agreed that getting away from Ponza had worked especially well plus having the longer Vesper to pace themselves against.

However with the wind filling in behind, the 65th Regata dei Tre Golfi benefitted the smaller boats. Within the maxi class, it was a corrected time 1-2 for the Swan 651s Marietta Strasoldo’s Lunz am Meer and Rosbeg of Riccardo Pavoncelli. Arriving less than three hours after Caol Ila R, these two under IRC were 10 minutes apart, but almost two hours and 20 minutes ahead of Giancarlo Gianni’s Carroll Marine 60 Durlindana 3 in third.

“It’s incredible – it hasn’t sunk in yet,” admitted Strasoldo, for who this was her first major victory. “We are still saying ‘did we really win? We still don’t believe it!

“This was the first time that when we fell into these windless holes we always managed to get out without stopping.”

Lunz am Meer may also have been benefitted from having the whole of Juan Kouyoumdjian’s yacht design office on board (where her daughter Lodovica works). “It was a great team building opportunity for them.”

Of their entertaining split south of Capri, Marton Jozsa, Wild Joe’s owner said: “We had always decided we would go south because of the wind shadow from the mountains on Capri which are quite high. But we wanted to see what the boats in front of us where doing first. Conditions weren’t great for the fast boats, but it was still exciting. Our boat [the former Wild Oats X] is good in light conditions but because of her canting keel our rating is not so good, but I am very happy how we performed against the bigger, faster boats.”

Ultimately overall victory in the 65th Regata dei Tre Golfi went to one of its smallest boats – the Este 31 Globulo Rosso of Alessandro Burzi.