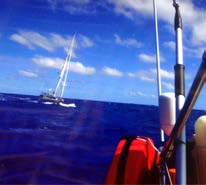 Windflower arriving on the scene. Photo John and Lyn Martin.

When we started off from Fiji on the Pacific Circuit Rally leg to Vanuatu we had waited a week to let a Tropical Depression in the region dissipate, but the seas were still lumpy. The forecast was for the weather and sea state to improve so we boxed on, at least that was until we received a Pan Pan via email!

The email came in with the evening position reports say­ing Sweet Disorder, a Lotus 1280, had suffered damage to their steering and were taking steps to rectify. NZ Mari­time Radio had been advised and we stood by for more information. By 2230 hours that evening the situation had deteriorated, so we turned Windflower around and head­ed back to stand by in case assistance was needed.

At 1100 hours the following morning we were standing off Sweet Disorder who had drifted overnight some 26 miles in a roughly northerly direction. Sweet Disorder was entirely without a rudder and all efforts to rig a jury steering had failed—not because they didn’t have the gear aboard but because the forces on the jury rig were beyond what it could handle.

We put the Iridium GO sat-phone to good use during this period, with calls to NZRCC, Sweet Disorder and Fiji. I was expecting a huge bill but was very surprised to find afterward that we had been automatically upgraded to the new “Unlimited” plan which now includes 150 monthly talk minutes rather than the previous 5 minutes.

Rescue Coordination Center in NZ got the ball rolling with Fiji Rescue Center in Suva and then effectively stepped aside. As a Pan Pan only had been issued and there was no imminent risk to life and Fiji had directed a fishing vessel to the area, it was now deemed a recovery operation not a SAR.

I can’t say enough about the people involved in this inci­dent. Island Cruising Association is associated with many companies in the area, chosen for their ability to smooth the way for the various rallies around the Pacific. It is gratifying that the planning works and our friends have come through for us.

First up is the skipper and crew on Sweet Disorder, cool, calm and methodical. Full marks to Paul and Helen Leydon and their crew. Fortunately, Sweet Disorder was insured. Baileys in Auckland are the brokers and talk about stepping up. Neil has sent in some comments below.

“We received an email from the NZ Search & Rescue coordinator on Saturday, late afternoon advising us of the predicament “Sweet Disorder” was in, and asking us “will their insurance policy cover the cost of a 150-mile tow back to Fiji?”

This from Neil Bailey— “We only had sketchy information at this point. We could appreciate the position and state of mind Paul and crew would be in, so we had to put our b***s on the line, and give a definitive answer – YES!”

Neil was involved again with the discussion on destination and finally again when Sweet Disorder got to within 10 miles of Navula Passage and a second tow had to be sanctioned as the fishing boat refused to go further.

And lastly, Yacht Help in Fiji. David Jameson and his crew liaised with the Fiji Navy, sorted all the paperwork out, ne­gotiated a clearance at Port Denarau arranged the second tow and got the ball rolling with repairs.

Now this whole business was not as easy as it would seem. The Fiji Navy had contacted two vessels in the area and directed one—the fishing boat—to the area. While in transit negotiations were underway as to who was going to pay the bill. Baileys stepped up and took on that responsibility.

They arrived on site and the first thing that became obvi­ous was that communicating with the fishing boat was going to be a problem, a skipper that spoke next to no English and a Fijian crew that had some but limited English that he spoke at a dozen words a second.

At this stage I took over the comms to allow the crew on Sweet Disorder to get on with preparing the boat. While waiting for the fishing boat we’d discussed various scenarios: how to set up the tow; how to securely attach the tow line; and how to stop the line from coming out of the fair lead.

Simply attaching the line to the bow cleats wasn’t going to cut it, two reasons: the line the fishing boat was propos­ing to set up was about a 60mm diameter and secondly; the loads under tow are extreme and the cleats wouldn’t have lasted five minutes.

After some frustrating back and forth it soon became ob­vious the fishing boat was intending to tow Sweet Disorder to Suva and it took over an hour of backward and forward and calls to their boss to get agreement that Lautoka would be the destination.

Meanwhile Paul and crew had Sweet Disorder pretty well sorted. Lines were run around the mast and braced back to the primary winches. Lines were run from the twin bow cleats to ready hold the tow line central and the anchor was removed from the bow.

Meanwhile the fishing boat crew were busy sorting the tow line and bridle out. Two crew were sent onto the roof of the aft deck with a “Monkey’s Fist” and light line—by this time they were rolling in the building seaway. The boys showed amazing balance almost like it was a walk in the park. The skipper of the fishing boat showed his skills by maneuvering his vessel within throwing distance, it looked close from Windflower, some 200m away—it must have loomed huge from Sweet Disorder. On the third attempt the light line was passed and then used to haul the main line over.

Getting the line through the pulpit and then the fair lead took some time, then attaching it to the lines set up on the bow. All this time the fishing boat remained on station. Now, comms became a problem again with every exchange taking ten times the length it should have. “Are you ready?” “No”, that means “NOOO,” will give you some idea.

The line was initially set at about 150m but it soon became ev­ident this was too long. When the tow started the skipper put on too much power and Sweet Disorder looked like the tail of a whip as she sheared from side to side. A drogue was set up off the stern and the tow length shortened, a couple of times, eventually finding a maximum safe tow speed of around 3.8 knots.

They were finally on their way at dusk that night with a long slow tow to Fiji. There were some shenanigans on the way too. The skipper was an impatient sort and after dark started to increase the speed. Paul related to me after that it took him three attempts just to reach the mike the first time. The tow was uncomfortable, to say the least, and the skipper on the second night turned to starboard, deciding Suva was a better bet for them. Slow negotiations again got them heading in the right di­rection only for the same thing to happen just short of Navula Passage, the main shipping channel into the Lautoka area. The presumption was that the fishing boat had never been there before, it was dark and the skipper most likely didn’t have charts for the entrance.

A local game fishing boat eventually finished the tow and Sweet Disorder and her crew arrived to a Brass Band and much fanfare at Port Denarau Marina with the Fiji Navy taking all the credit for the rescue, hey, they were safe so where’s the harm!

Sweet Disorder was hauled at Denarau and on investigation it was found the 2 inch stainless steel rudder shaft had sheered off at the hull, leaving the remainder of the shaft in place—hence no water ingress.

Rudders have long been a niggle area for me principally spade or unsupported rud­ders. Falling off a wave in the open ocean puts huge loads on the boat and when you look at the lever arm on a 1.8m rudder it’s no surprise we see failures.

In the PCR fleet this year we’ve had four boats with rudder problems, all spade type rudders. Sweet Disorder obviously but also two Bavaria 46s and a Beneteau 44. All were hauled at Opua prior to the start of the rally for rudder work.

They’re not alone—we‘ve seen rudder problems again and again both in the fleet and with other notable cases. I must admit, I’ve thought in the past and indeed talk about it in our Cruising Preparation Seminars about how to rig an emergency rudder or steer by a drogue, all very well in theory but this episode has given me a real world look at the problem and in this case reality has lifted a couple of fingers to theory.

With hindsight, it’s my opinion there needs to be more done to prepare boats with an unsupported rudder. We already ask Bavaria owners to have their rudder area checked by a shipwright (hence the two haul outs in Opua) but that may not be enough. The difficulty Paul had setting up emergency steering shows that the old floor board and a couple of u Bolts needs to be thought through with a bit more detail and should be trialed before heading over the horizon.

Rumor has it the tow cost close to $30K, ouch, perhaps there’s a better alternative, and one of my favorite words would be redundancy. I commented to Paul when we met them in Vila, (they had family already booked to join them in Vila and we ended up joining them there too), we often look at either beefing up or adding a second autopilot to the boat, neither one would have helped in this instance.

On the other hand, a Hydrovane Wind Steering unit, which has its own rudder, would have. In fact, they probably wouldn’t have even noticed the loss of the rudder until they disengaged the Hydrovane ready to motor into the anchorage at Anietyum. Food for thought.