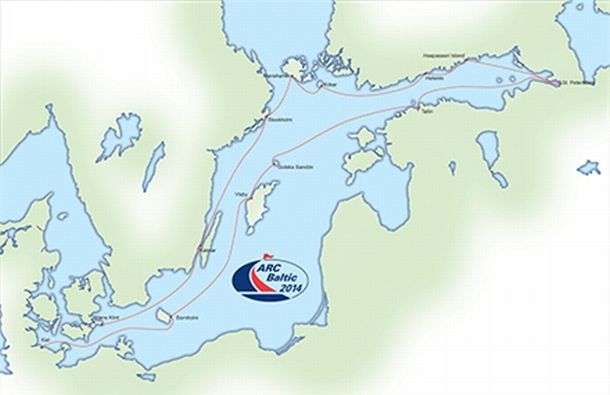 A superb response was received when entries opened for the inaugural edition of the rally which sees World Cruising Club's popular cruising-in-company format adapted specifically for the Baltic. The focus of the rally is on experiencing the cultural history of the region and enjoying the stunning beauty of the Swedish and Finnish archipelagos – something which has appealed to previous participants of WCCs trans-ocean rallies. In fact, ARC Baltic will be something of a reunion for some of the fleet, with no less than five boats from ARC 2011 sailing in the rally, including lead boat Working on a Dream.

Leading the fleet is Baltic and European sailor Hans Hansell on board his Jeanneau 45. After ARC 2011, Hans and Working on a Dream sailed around the world with World ARC 2012-13 then with ARC Europe back to his home in Sweden. He is excited to be sharing his home waters and passion for the history of the region with over 200 sailors who will join ARC Baltic during the rally.

The rally format includes 28 nights docking during the cruise along with an organised itinerary focusing on Baltic highlights. From Kiel, Germany, the first leg sails to the Danish island of Bornholm then on to the walled town of Visby, Sweden.  The uninhabited island of Gotska Sandön is the next stop en route to Estonia's capital of Tallin, where the fleet will stay at the marina built for the 1980 Summer Olympic Games.

Following assisted clearances, the rally will spend two full days exploring the sights of St. Petersburg, Russia, including organised tours of the Winter Palace, the Aurora, and a Russian crew dinner. Leg six and seven promise spectacular sailing through the Finnish Archipelago on route to Nyländska Jaktklubben (NJK, the oldest yacht club in Finland) in the centre of Helsinki, then to Kökar island in the åland archipelago.

The fleet then visits Mariehamn and KSSS (Royal Swedish Sailing Club) marina in Stockholm, Sweden discovering the rich maritime heritage of the region. The final legs take the rally through the Swedish archipelago to Kalmar and onto Mön, Denmark, before the rally comes to a close in Copenhagen. Over six weeks the rally will sail close to 1600 nautical miles, with an itinerary that allows flexibility for the prevailing weather encountered.

The rally entry list is as diverse as the itinerary, with boats and crew members hailing from almost every corner of the globe. Australian owner Andy Oliver has possibly travelled furthest to sail with the rally, he's just retired to sail his newly delivered Hanse 505 Hanse Sailor full time leaving his native Queensland for a new adventure. On board, he's joined by a diverse crew from Australia, New Zealand, USA, and Germany! The itinerary is broken into legs allowing those with limited time to sail as crew for a portion of the rally, which has proved popular with charter yachts giving individuals the opportunity to have a taste of Baltic cruising.

Also sailing with the rally are groups of friends, family boats and cruising couples, including John and Sue Allison who will be setting the leg pace for the fleet on board their J/109 Jumbuk. Married 41 years and been sailing for 30 of those, John and Sue are keen racers and cruisers who won their class in the ARC in 2007 on board their previous yacht Swagman. They have enjoyed owning 12 different yachts over the years, from 26' class keel boats to 46' cruiser racers, and competed in a busy Solent racing season including Round the Island Race prior to departing Lymington for Kiel at the end of June. Whilst the pace of ARC Baltic maybe slower than Jumbuck is used to, John and Sue have been enjoying the challenge of turning her into a mini cruiser for their summer season.

Yachts in the rally range from Southerly 32 Ballygown Bay (GBR) to Bowman 57 Longbow of Argyll (GBR). Mood Magic (JER) a Moody Carbineer 44 is the oldest yacht in the fleet, whilst Hanse Sailor (AUS) was launched at the Hanse wharf in Greifswald in late April 2014 and ARC Baltic will be the first significant mileage under her keel.  8 children are sailing with the rally including little Arwen who will join from Kokar to Mon aged only 7 months. Martin and Victoria Sjöbohm, aged 14 and 19 respectively will sail with their parents on the family yacht Salt (SWE), a Jeanneau Sun Odyssey 45, for the majority of the rally.