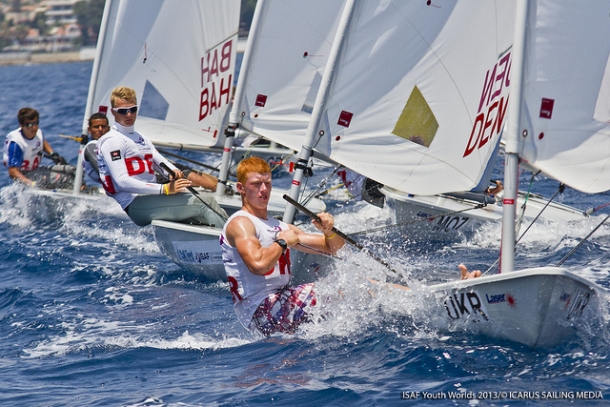 The Laser Radial Boys and Girls fleets will be the largest at the 2014 ISAF Youth World Sailing World Championship with 58 male and 47 female competitors ready to do battle in Tavira, Portugal.

Racing commences on 14 July with the world's best young Radial sailors ready to fight for the titles that have been won by Russell Coutts (NZL), Robert Scheidt (BRA), Ben Ainslie (GBR), Siren Sundby (NOR) and Carolijn Brouwer (NED) throughout the history of the regatta.

Since the turn of the year Finland's Monika Mikkola has set the pace in the Laser Radial Girls division and currently holds both the World and European titles.

Mikkola secured Radial gold with a race to spare at the Worlds on 3 January at Mussanah Sports City, Oman and exactly six months later convincingly won the Europeans in Aarhus, Denmark with a 15 point margin over her Youth Worlds rival Marie Barrue (FRA).

The Finnish sailor has ISAF Youth Worlds experience behind her, finishing 18th in 2012 with bronze following in 2013 and comes in well prepared and focused, “2013 was really tough,” said Mikkola. “The level was really high and everyone was pushing hard. I had a great regatta and made a huge improvement from the 2012 ISAF Youth Worlds.”

At the 2013 regatta in Limassol, Cyprus Mikkola jostled for position with 2014 ISAF Youth Worlds returnees Barrue and Haddon Hughes (USA) and whilst she recognises the threat of two familiar faces there will be 44 other competitors to deal with on the Tavira start line, “There are many other girls who are really good so the competition is going to be harder this year I think.

“I'm trying to sail as well as I can and we'll see. I'm really looking forward to sailing in Tavira. Last time I was sailing there was at the 2011 Optimist Europeans and I really liked the place.”

Like Mikkola, France's Barrue comes into the 2014 Youth Worlds with knowledge of the event following a 17th in 2012 and a sixth in 2013 and has some personal scores to settle, “Last year I finished sixth and I was a bit disappointed because up until the last day I could finish on the podium but on the two last days I didn't sail to do it and the other girls were better.

“After that, I studied the things that I missed to take a medal and I've worked hard on it this winter.”

Barrue has embraced the unique atmosphere of the ISAF Youth Worlds and is looking forward to it for one final time, “For me this regatta is still the best under 19 event,” explained Barrue. “It is an amazing experience. The atmosphere is friendly with a good welcome and the volunteers and organisers are very helpful and kind to all the sailors.

“This year will be my last year I just want to enjoy it. I love Tavira and I really want to come back to France with the gold medal. I will give the best of myself and sail as best as I can in the order to win it.”

Of the top ten from the 2013 Laser Radial Boys fleet only silver medallist Joel Rodriguez (ESP) makes a return to the ISAF Youth Worlds.

The Spaniard was unlucky not to walk away with gold from the 2013 ISAF Youth Worlds as he forced a final day showdown with Puerto Rico's Juan Perdomo that ultimately his rival won by a narrow three points.

Rodriguez will head to Tavira brimming full of confidence after he blitzed the field at the recent European Championship, winning gold with a 25 point difference between himself and Ryan Lo (SIN).

From the 12 race series Rodriguez finished in the top four in nine of the 12 races, consistency that will be key in the 58-boat fleet in Tavira.

Singapore's Low only managed to finish ahead of Rodriguez once in gold fleet racing at the European Championship but he has World Championship success behind him after picking up the under 17 silver medal at the 2013 Laser Radial Youth Worlds.

Danish sailor Patrick Dopping had the better of Rodriguez on two occasions at the European Championship but failed to deliver on the consistency evident in the Spaniards score line.

The ISAF Youth Worlds commences on 12 July and runs through to 19 July. Racing kicks off on 14 July at 13:00 local time.