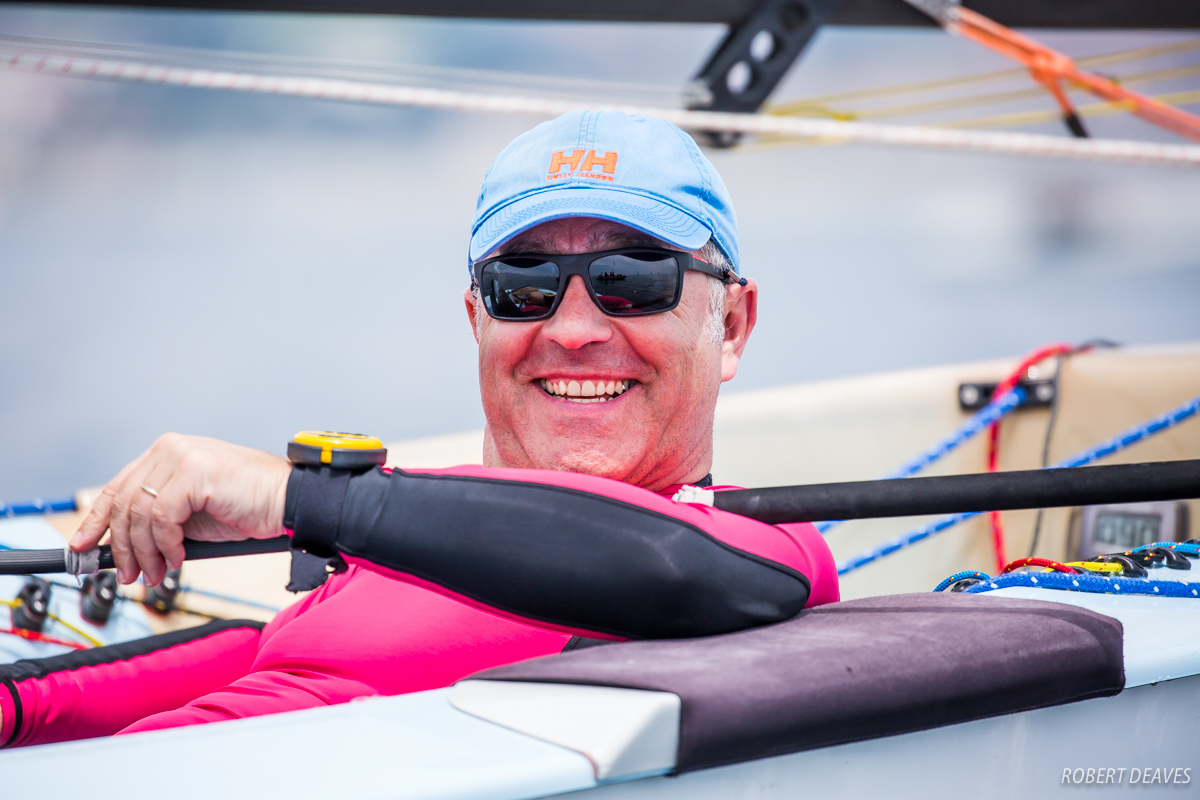 Happiness is sailing a Finn in the Med.

The day’s forecast was not great, but a light wind was established late morning and after a short delay ashore the fleet was sent out on the water. While there was a sailable breeze on launching it soon died away in the hazy sunshine leaving the fleets drifting round on a glass-like sea.

For a while the wind threatened to build from the south, but that too faded and never returned and the fleet were eventually sent back to the harbour. Through the afternoon and early evening the sea remained flat and windless. However, the sailors remained positive and happy and are enjoying their time in Sant Andreu de Llavaneres. After coming ashore, the sailors were treated to a beer party and a raffle for the daily prizes, on the beach at the event village.

This year’s Masters championship may be four boats short of the largest Finn event of all time, but in terms of boats on the water the 2018 Finn World Masters may well have set a new world record, despite getting no racing in.

While the record entry for any Finn event, as far as we know, stands at 355 entries in 2016, many did not sail that year because of strong winds. Today at El Balís, around 350 boats launched into the placid Mediterranean, which could be a record for the class.

The organisation in El Balis has been exceptional with just about everything considered and planned out in great detail. To manage so many boats on the water there is a jury team of 16, with four boats per course area. Half the team, mainly local or Spanish, are here at their own expense, both regional and national judges, to learn from being in a big team and to build up to national judge or international judge status.

The team of International Judges (IJ) chaired by Chris Watts, from Britain, is putting on training for the jury and volunteers each day, time permitting, to build their experience and knowledge. Training is being planned during the week by some of the senior judges.

Watts was very complimentary of the Finn class policy towards jury selection and also that the OA was able to invite these extra observers and national judges. He said, “We have been working with the Finn Masters and Corinne McKenzie of the International Finn Association, to train up more judges to work with the Finn class, and this is one of the initiatives towards that, to work with younger people to make them ready for the major events in the class, train them up for IJ status, as well as prepare them for other events at the club here.”

Another world record was also possibly broken at El Balís today. After the racing was abandoned today, 350 Finns were towed back to the club. Racing is scheduled to start again on Tuesday at 12.00. The forecast is slightly more favourable, so hopefully racing will get finally get underway.