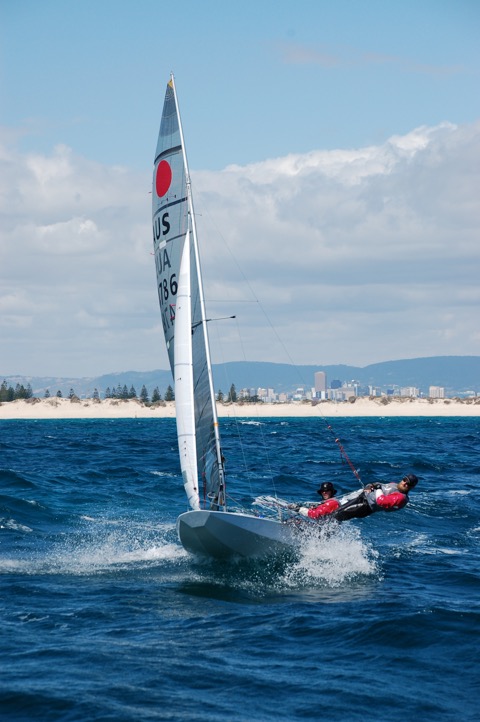 18/06/2015
Fifty years after the first Australian Championships and nearly 55 years since the initial prototype was launched by Peter Milne in the United Kingdom, the Fireball class is still going strong. This year the class is heading back to one of its favourite venues, Lake Cootharaba near Noosa in Queensland. The venue is one of the classic racing locations in Australia with warm flat water and a strong sea breeze on a salt water lake. With the strong wind and flat water, it is ideally suited to racing for all boats, but particularly the Fireball.
This year we are expecting very tight racing between a number of competitors, John Heywood(IFAA President) / Brett Littledike are hoping to repeat their performance from last time the class sailed there in 2004/05. Others who plan to make it difficult for them include current national champions Robin Inns (SA), Joel Coultas(SA), plus perennial top performers Ben Schulz(SA) and Heather Macfarlane(VIC).  New and upcoming sailors will also be in with a shot, this includes Lloyd Collings (VIC), Jack Lidgett(VIC), Jalina Thompson-Kambas (SA). Ben Schulz's training program includes sailing in the International Fireball World Championships in Wales (http://fireballworlds2015.com) in August with young Tasmanian Doug Sheppard. Ben and Doug will be representing Australia against a fleet of over 120 boats including several World Champions.
Fireball International has always run regattas in exotic locations such as Barbados and Thailand, and next year is no different with the European Championships being sailed in Lake Garda, Italy and the World Championships in Mossel Bay South Africa (http://www.fireballworlds2016.co.za), followed by Barbados again in 2017.
If anyone is interested in sailing a Fireball please contact your state association.  Most associations have access to competitive boats for loaning plus crewing positions may be available.
IFAA – Danielle Godden – d.godden@bloomhearing.com.au
South Australia – IFASA – fireballsa@hotmail.com
Victoria – IFAV – Chris Payne – chris.payne@p4g.biz
New South Wales – IFAN – rxhughes@hotmail.com
Western Australia – IFAWA – lufflot2@bigpond.com
Queensland – IFAQ – Danielle Godden – d.godden@bloomhearing.com.au
More information – http://www.fireball-international.com/upcoming-events/upcoming-events/2016/01/2015-16-australian-fireball-championship/
– Chris Payne