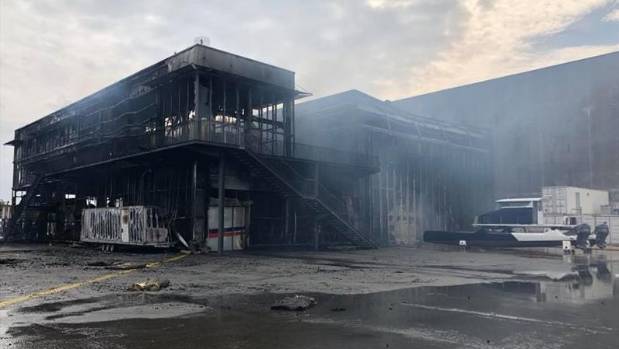 Team France's sailing base in Lorient was destroyed by fire. Photo Team France.

In the early hours of Saturday morning (9 June), a fire broke out in Lorient, Brittany, in Groupama Team France's former base utilised during the 35th America's Cup.

The team said it was “extremely fortunate that there were no victims to lament”. The cause of the fire is yet to be determined.

The damage to the base didn't affect Team France's equipment as this is now stored at their sports activity premises rather than in this base. Moreover, the AC 50, the boat used in the 35th edition of the Cup was not stored in the base.

The sports programme led by Franck Cammas in 2018 (GC32 Racing Tour with Norauto powered by Team France and the Youth Team France programme supported by Suzuki) will therefore continue as normal.

“This has no impact whatsoever on our motivation and our campaign for the next edition of the Cup” says an adamant Franck Cammas, skipper of Team France.“Even though it's a real shame to witness the destruction of an innovative building built some 20 years ago by the town of Lorient with the aim of accommodating a series of key sailing projects on the international stage. This fantastic initiative by the town has provided sailors with some high-performance technical means, on a par with the far-reaching ambitions of professional sailing teams. I hope that a new building for challenges will quickly see the light of day so that this great idea continues to bear fruit.

“I'd like to pass on my heartfelt thanks to all the firefighters who battled to get the fire under control throughout the night. We've also received a massive amount of messages of support, which is really heartwarming. This fire has nevertheless seen something that is a symbol of the majority of my professional career go up in flames.”

The media release finished: “Bolstered by the unfailing support of partners and supporters, Team France will continue to work hard so that France is present at the 36th America's Cup.”