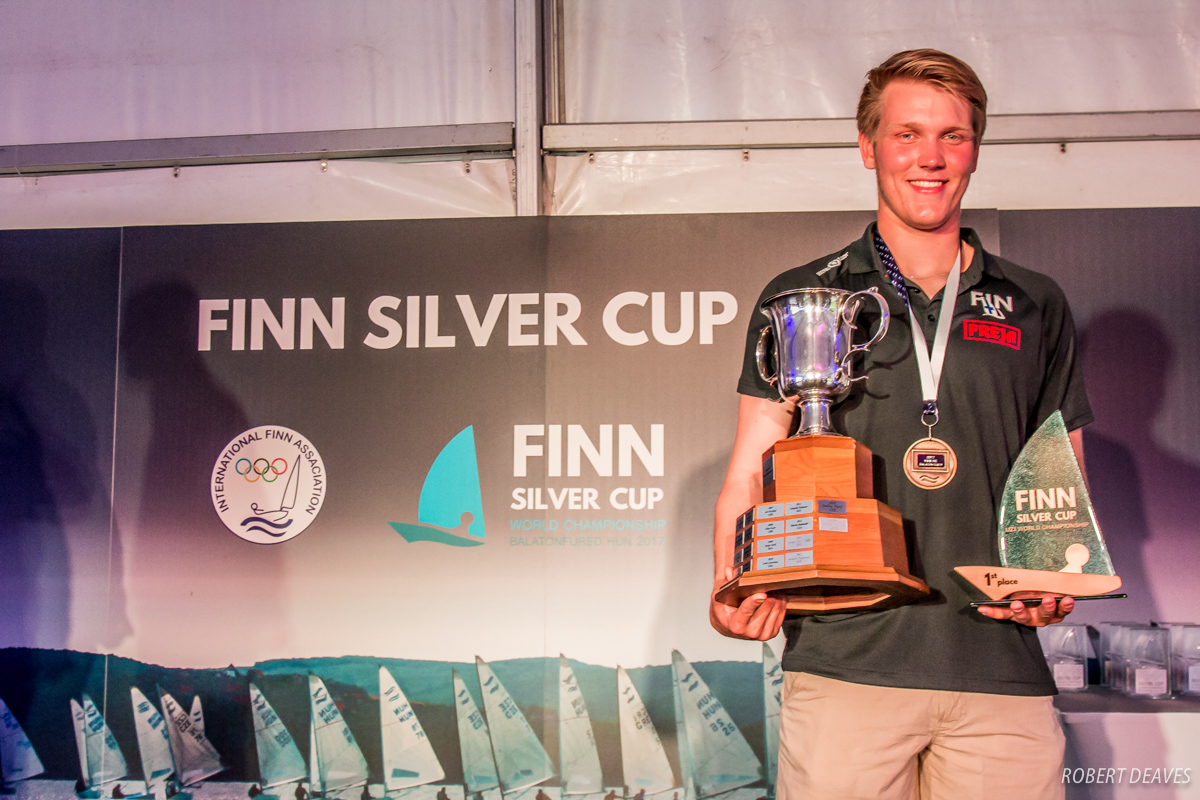 Oskari Muhonen with the Silver Cup

The 2017 U23 Finn World Championship for the Finn Silver Cup in Balatonfüred draws to a close after another windless day and with Finn, Oskari Muhonen, as the new World Champion. Facundo Olezza, from Argentina, wins the silver and Fionn Lyden, from Ireland, the bronze.

Sailors gathered at the club from 0700 in the morning hoping against hope that the previous night’s forecast of some wind was correct, but it wasn’t to be and AP was soon raised for another day sitting round in the blazing sunshine beside an unblemished lake.

The plug was pulled shortly after 13.00 with no wind expected all day and a cutoff time of 14.30. Even by 17.00 the lake remained motionless with the only movement that of ducks, swimmers and chains of Finns being towed to Balatonföldvár ready for the Opel Finn Gold Cup, which starts on Friday.

Olezza takes silver after a bronze in 2016 and left with a lot of ‘what ifs’ after losing the overall lead on Friday. Lyden, sailing in his first Finn regatta is clearly going to make a name for himself if he keeps up this kind of performance.

Speaking after the racing was abandoned, Muhonen said, “I expected we were going to sail today but the weather is what it is. It’s a lake so I expected it to be pretty tricky, so it’s as I expected.”

Earlier in the week he said his goal for the event was gold, but did he really expect to win? “Nah, hmm, maybe… I knew I was fast in the light but it’s always pretty good and surprising to win. My downwind in the light is pretty good but also on the upwind I felt I had really good height.”

He is coached by former Olympian Paul McKenzie, and Muhonen places some credit on him. “Paul is a pretty good coach and had a lot of influence on this.”

The Gold Cup is next up for the new World Champion.

“Of course it’s good to have a successful regatta before the Gold Cup, but it’s not the same race area but at least I know I am pretty fast.”

“If we have a northern wind it will be like the other side of the lake so not that shifty. Otherwise, maybe some light and fluky stuff. But we can have harder winds as well. Just before this regatta we had a few days of better breeze and that would be great.”

He feels it is a crucial step on his dream of competing at the Olympic Games in Tokyo in 2020.

“It feels good for the Tokyo 2020 Olympic dream, wining now and I think gives me a lot of confidence for that dream. I think I will work on the harder winds especially on upwind speed and tactics.”

On his chances, “I think it’s pretty good. If I can improve in harder in the hard wind I will stand a pretty good chance.”

To get there he has to overcome several obstacle, and the Finnish team is now as strong as it has been for a generation.

At the very first Silver Cup in 2004, Tapio Nirkko from Finland lifted the trophy in Rio de Janeiro. Fourteen years later, Finland has another Finn youth World Champion in Oskari Muhonen. Nirkko went on to represent Finland in three Olympic Games and is campaigning for a fourth Olympics in Tokyo. His biggest opposition to do that could now come from the young Muhonen.

On being World Champion. “It feels good to win and it’s great. My first world championship title. Pretty amazing.”

Despite the unhelpful weather the MVM SE sailing cub has done an exceptional job looking after everyone. Great food has been laid on every night and the staff has worked tirelessly to keep everyone fed and watered.

The lounge tent on the lawn has been active all day and while the sailors may not have improved their sailing skills as much as they would have liked, their table tennis, volleyball and fuseball skills have improved beyond measure.

The sailors now move across the lake to Balatonföldvár where the Opel Finn Gold Cup, the class world championship will begin next Friday with 124 entries.