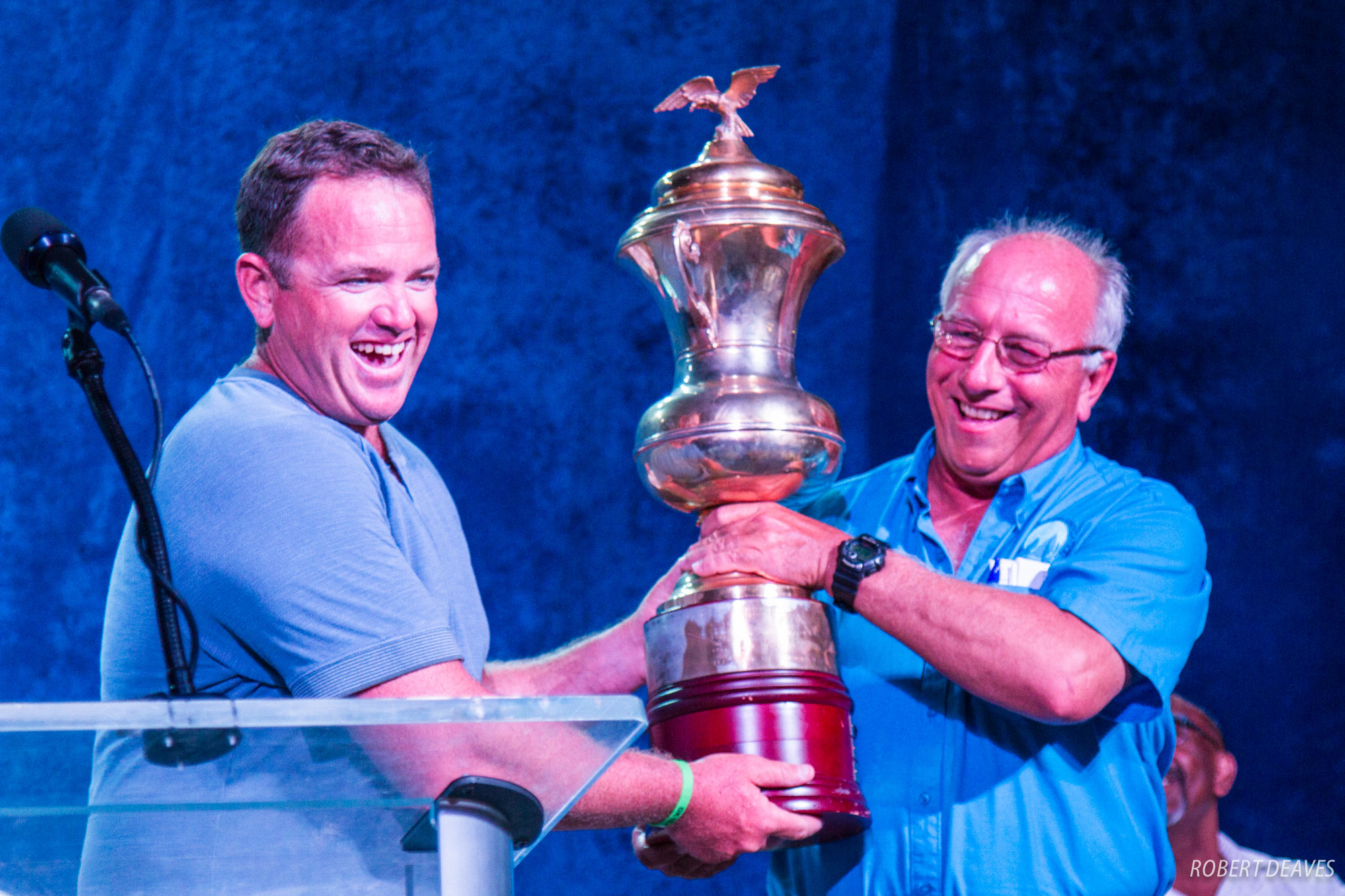 Then the 2016 Finn World Masters Champion

One hundred and thirty seven Finns from 21 countries are waiting on a beautiful sandy beach under the brilliant blue skies of Barbados as the 2017 Finn World Masters was officially opened Sunday night at the Barbados Yacht Club overlooking the picture book azure waters of Carlisle Bay.

Following directly on from the OK Dinghy World Championship last week, a lot of the sailors arrived early and have been training in the bay to try to get to grips with its idiosyncrasies that became rapidly apparent during the OK regatta. The Practice Race was scheduled earlier on Sunday but a strong wind gusting to 28 knots exceeded the wind limit set by the class and racing was abandoned shortly after the fleet arrived in the start area. It wasn’t all-bad news though as it enabled the sailors to spend more time on the beach enjoying the club’s excellent hospitality.

The fleet here includes the past three Finn Masters World Champions, Rafa Trujillo from Spain, Vladimir Krutskikh from Russia and Michael Maier from Czech Republic as well as nearly a dozen sailors who have been propping them up for the past few years. The largest team is from Great Britain, with 31 entries, benefitting from the great shipping sponsorship deal from Geest. The fleet is filled with sailors of all ages including 13 Legends, those old enough to know better but having failed miserably to give up Finn sailing before they reached the age of 70. It is quite hard to do.

Mr Reader opened with a challenge to the Finn sailors, “Just over a week ago we hosted the OK Dinghy World Championships. We are now hosting the hardcore sailors and the winds gods have sent the hard core winds for the hard core sailors.”

Thanking the many volunteers making these events possible he said, “The sailing community in Barbados is committed and generous towards our sport in Barbados. It is my hope these events leave a legacy to Barbados sailing especially the junior sailors.”

He also noted, “This is the sixth and our largest championship we have held in Barbados.”

Mr Denison replied, “It's been a long time coming but I think have all been looking forward to this. We've have nothing like this for a long time.”

Then the 2016 Finn World Masters Champion, Rafael Trujillo, presented the trophy to Mr Reader to take care of for the week ahead.

Before Mr Denison declared the championship open, Senator Boyce talked about the long term vision for Barbados sailing to develop the skills of its youth sailors and creating “a vigorous programme of sailing in schools. We want to make sure that the industry reflects all ages of sailors in Barbados.”

He summed up, saying, “Have a wonderful sailing all week and I wish you all wondering sailing and wonderful competition.”

Forecasts for Monday and later suggest even stronger winds…we hope they are inaccurate. Eight races are scheduled over the coming week with five titles up for grabs: Masters, Grand Masters, Grand Grand Masters, Legends and Finn Masters World Champion. Judging by the conditions so far it is going to be a tough but thoroughly enjoyable championship both on and off the water.