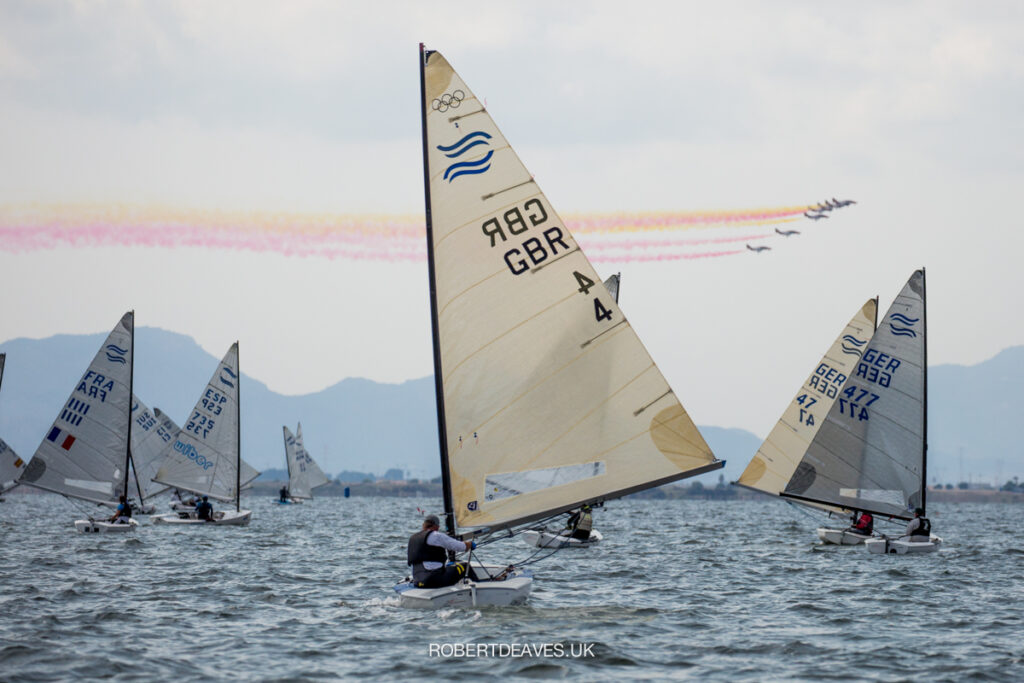 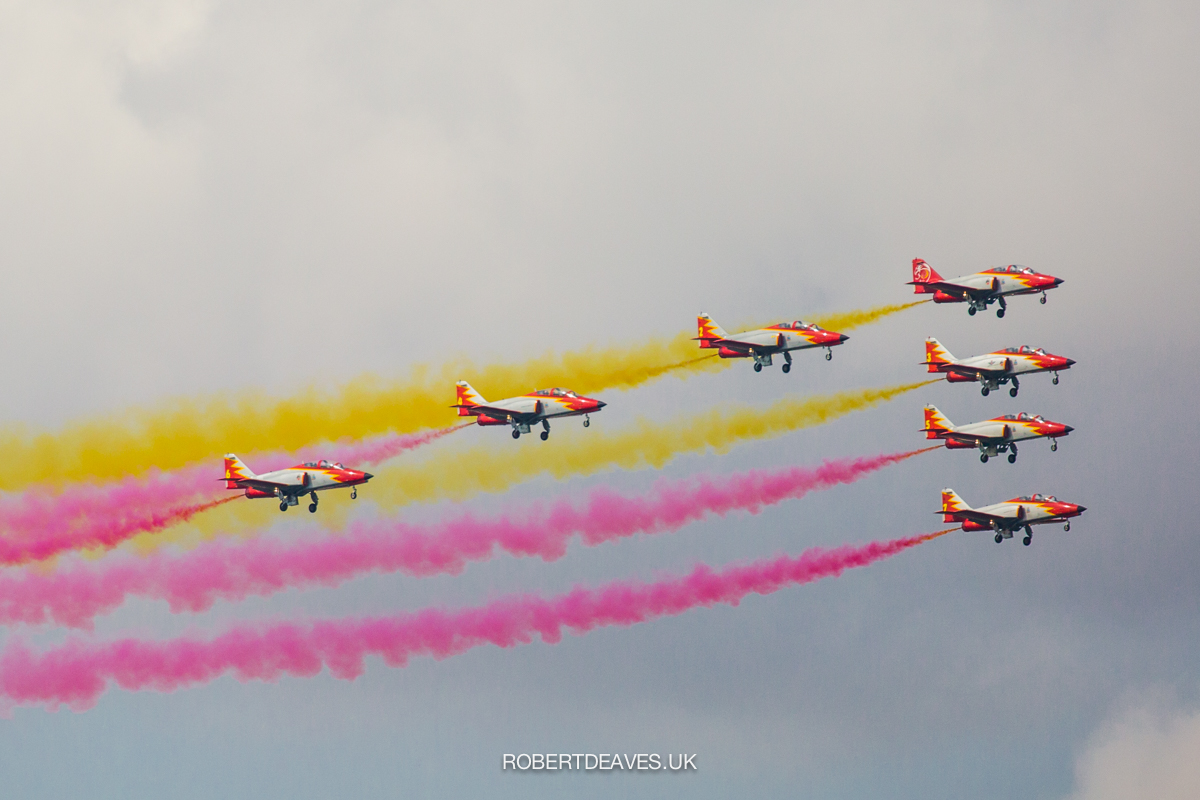 Air display in honour of the event. Pic - Robert Deaves 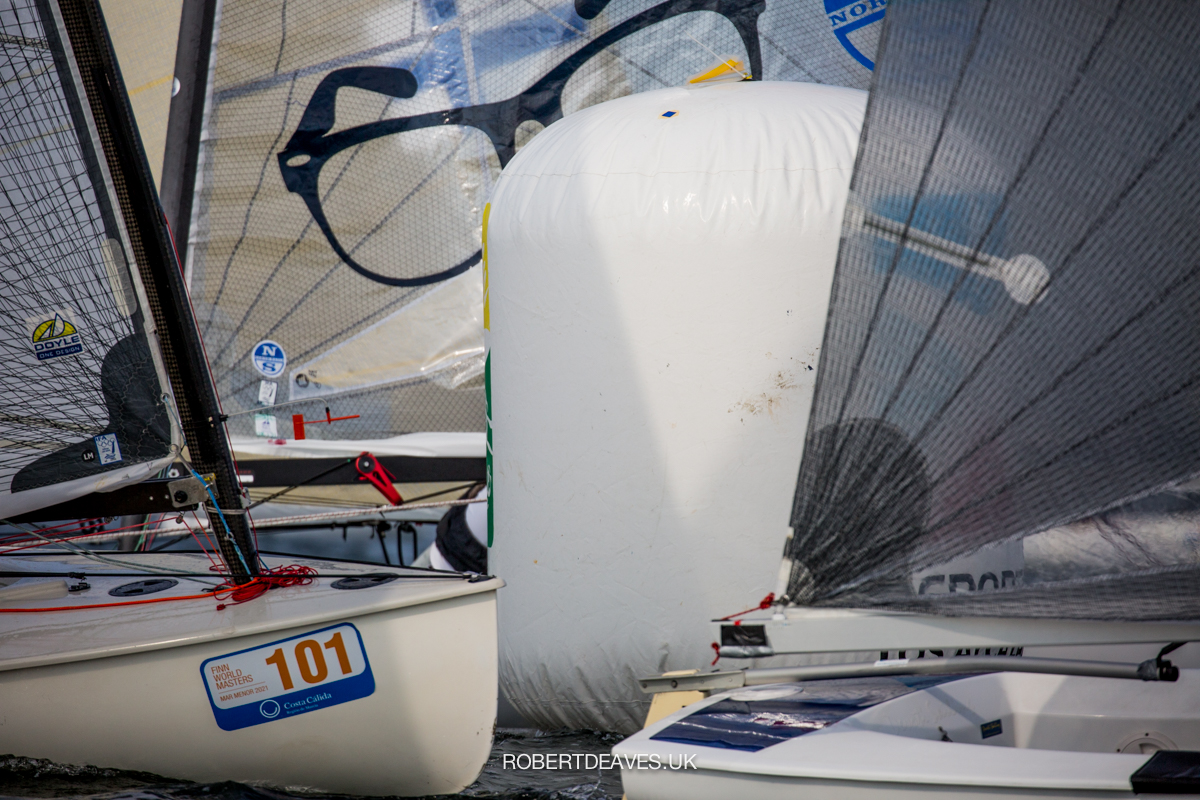 Bas de Waal, from the Netherlands, and Jesus Pintos, from Spain, may have won the races on the second day of the 2021 Finn World Masters on the Mar Menor, in Spain, but it was France’s Valerian Lebrun who extended his lead after securing third and fourth place in the light and difficult breeze.

Cloud cover for most of the day kept the temperatures lower than Monday, with a lot less wind at 6-10 knots. It was also really shifty with pressure changes across the race course bringing groups up the fleet and spitting some out the back.

There were a lot of new faces near the front and some of the top sailors struggled to get anywhere near the front. However the highlight of the day was a dramatic fly past in race three by the Spanish air force display team, flying a circle over the fleet while streaming the Spanish national colours.

Opening the day with a win in race three, de Waal took the bullet after the leader for most of the race Nuno es Silva, from Portugal, was black flagged. Australia’s Paul McKenzie recovered well to cross second with Lebrun third. De Waal was himself then black flagged in race four.

Under the black flag again, race four got away after a general recall and long postponement following a wind change. It was a dastardly tricky race with some huge pressure changes. Some of the fleet could do nothing right.

Reading the wind was not easy but Jesus Pintos did something right to take the lead and a huge win. He sits in 48th overall after a 91, 75, 36, 1 scoreline so far.  Some way back, Allen Burrell, from Britain, placed second – to complement his 58th in the first race of the day – but moves up to 10th overall, while Filipe Silva crossed third.

No complaints coming ashore though, with more lashings of free beer and a BBQ in the boat park before a gin tasting session at the Hotel Costa Narejos.

Tuesday was certainly a day for the legends with Gerardo Seeliger rounding the top mark in race three in around seventh place, while Hart rounded top 20 in race four to finished 32nd.

So, after four races Lebrun has an 18-point lead from Terol, with Filipe Silva just three points further back.

Australia’s Paul McKenzie, who competed in the Finn in the 1996 Olympics, is coming 27th overall. And not too far behind him is fellow Australian Olympic sailor Anthony Nossiter, who has dropped back following a black flag in the final race of the day.

One race is scheduled for Wednesday, when the discard will kick in and change the landscape somewhat with many currently counting a letter or high score. Racing continues until Friday.