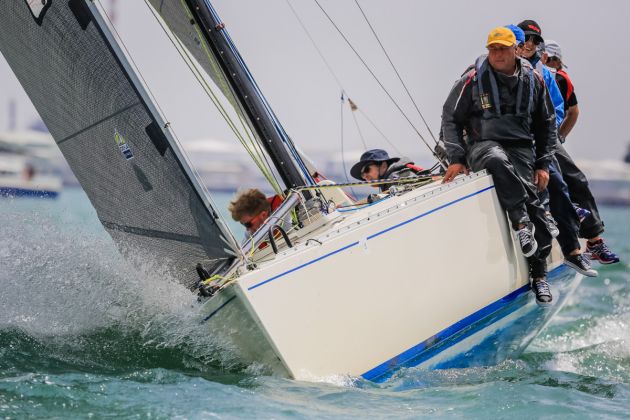 The very last Festival of Sails trophies have been awarded to the Rating Series and Super 11 winners and masses of weary sailors are heading back to their home port this afternoon, to some much needed normalcy after five long days of sun, salt spray and way too much sailing talk.

Thousands of holidaymakers and Geelong locals flocked to the foreshore for the top-shelf Australia Day entertainment line-up, sampling tasty treats and the carnival atmosphere. Out off Corio Quay courses were set, then reset by race officials as the wind shifted from ESE to the SE, ranging from 10 up to 20 knots by late morning.

Full results for every division are at http://www.topyacht.net.au/results/2016/fos/index.htm

The Rating Series’ penultimate race 7 created the split tenacious interstate contender Geoff Boettcher’s Secret Mens Business needed to silence the Sydneysiders on Tony Kirby’s Ker 46 Patrice. After going race for race on corrected time to be on equal points this morning for the second day, a three IRC point winning margin must have felt like a whitewash to the Adelaide based TP52.

“It was plain sailing out there today, just one good boat against the other and whoever got the break won the regatta,” said Boettcher having extended his hand to his rival skipper on the dock and passed on “congratulations for giving us hell for a few days”. “They had some pretty hot sailors on Patrice; the final result made us feel a bit better… being boys from the back blogs of Adelaide.”

Forget changing things around on the boat or working on maneuvers before the next event, Boettcher’s biggest takeaway from the festival was, “Not to drink so many reds at night to calm our nerves”.

“The Adams 10 was designed in 1970, Top Gun was built in 1980 and our average crew age is 65; it’s hard work for old guys but experience counts,” Peters said. “It’s a known fact the Adams 10 is the eighth wonder of the world,” he says straight-faced. “We enjoyed the whole regatta and festival and we’d love to come back again next year.”

The gender-balanced Geelong crew on Cam Rae’s newly restored Thompson 920, Poco Loco, threw everything they had at Damian Thomas’ Melges 32 PP1 from Sydney’s northern beaches in the final two windward/leewards on Corio Bay. But it was the supreme consistency of another new owner and crew combination that made PP1 invincible.

“PP1 sailed an awesome regatta, they were the boat to catch and were too good over the duration,” Rae praised on the Australia Day afternoon, January 26, having picked up second overall in the sexy new Optimum time Super 11 Series. Not bad for their maiden regatta.

On the Super 11 concept trialed at the festival he added, “Sailing aso [asymmetric] boats against aso boats is great racing and the concept of Super 11s works for boats that rate equally bad on AMS and IRC.”

Denis Thompson, RGYC sailing office staff and the huge team of regatta officials and volunteers made sure more than 2,000 sailors enjoyed fair sailing and a good time, had some final words.

“It’s been another great regatta, having wind always helps. We had typical and fairly steady Geelong sou’easters every day, that always makes the competitors happy and it makes regatta management a little bit easier. Plus the racing is super close. No-one can skip away.

“The Super 11 concept certainly has potential; it was good to see their inaugural championship at the Festival of Sails, and it was certainly exiting to watch the VX Ones get up and boogey when the breeze increased.

“Usually we lose a percentage of the cruising fleet after the passage race but this time virtually all stayed on for the series, making some of the fixed mark roundings spectacular.

“We ran five course areas on the biggest three days using mostly volunteers; one of those came all the way from the cold of Chicago. Every year it blows me away that the club’s pretty small base of volunteers can pull so many people in.”

Two Australian Championships were decided at the festival and the RGYC encourages other classes to get in touch with its sailing office to discuss running their major titles on Corio Bay in January 2017 and beyond.