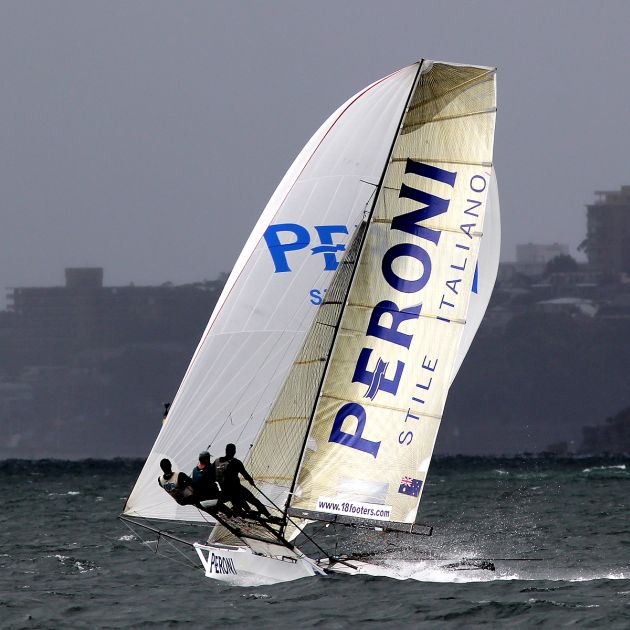 Peroni at speed on the run towards Obelisk. Photo 18 Footers League.

The Australian 18 Footer League’s 2015-2016 Season concluded on Sydney Harbour today with the Smeg 18ft Skiff team taking out the Club Championship and the Alcatel One Touch team winning the Season Point Score title. Today’s race was sailed in a south wind with all teams electing to use their smaller #2 rigs.

Although recalled at the start, the Coopers 62-Rag & Famish Hotel crew of Jack Macartney, Peter Harris and Joel Castle came back strongly to take the victory in an exciting and unpredictable race. ‘The Rag’ crossed the finish line 35s ahead of Noakes Youth (Ash Rooklyn), with Smeg (Nick Press, standing in for the regular skipper Lee Knapton) just 7s further back in third place.

Lee Knapton, Mike McKensey and Ricky Bridge won the JJ Giltinan, Australian and now the Club Championship with some great teamwork in the red boat. Smeg finish with 43 points as did Thurlow Fisher Lawyers.  Today’s winner Coopers 62-Rag & Famish Hotel was third on 63, followed by Gotta Love It 7 (Seve Jarvin) on 75, Appliancesonline.com.au on 78 and Yandoo (John Winning) on 80 points.

In a stunning performance, Stephen Quigley and his ‘rookie’ youngsters took out the Club’s Season Point Score trophy. Stephen, the 1996 JJ Giltinan champion, returned this season with his son Thomas Quigley and another young rookie Sam Ellis in the Alcatel One Touch-sponsored skiff. The team began the season on a 10 minutes handicap, but a series of wins saw the handicap reduced to a point where they now join the ‘big guns’ on a meagre one minute handicap.

Alcatel One Touch finished the season on 165 points.  Coopers 62-Rag & Famish Hotel was next on 170, and The Kitchen Maker (Andrew Chapman) third on 171.

With 12ft Skiff champion Nick Press replacing Lee Knapton today, Smeg quickly grabbed the lead and led the race over the first lap of the long South course. On the first long spinnaker run from Clarke Island to Obelisk, most interest centred on the close racing behind the tearaway leader. Noakes Youth and Mojo Wine (James Ward) were battling for second place with Appliancesonline.com.au and Ilve (Ollie Hartas) close behind. The Kitchen Maker was sixth and the eventual winner Coopers 62-Rag & Famish Hotel seventh.

The fleet ‘disappeared’ into the mist at the end of the run and Smeg was still a clear leader when they came back into clear view of the spectator ferry patrons. Noakes Youth was still in second place, 30s from the lead, but ‘The Rag’ had already begun to make a move and was close by in third place at the Rose Bay mark.

Over the following two legs of the course, Coopers 62-Rag & Famish Hotel moved into second place and the spectators were treated to an unbelievable race as the two leaders sped downwind on the second spinnaker run to Obelisk. When the two teams began the work back to Rose Bay there was only a few seconds between the skiffs, but Smeg revelled in the freshening breeze and edged away to a 45s lead as they began the two-sail reach to Athol Bay.

The race looked to be all over, but in fact it was just beginning as the leading group encountered unusual conditions. Smeg was first to capsize, then Coopers-Rag & Famish almost followed in the same part of the harbour, which allowed Noakes Youth and Appliancesonline to close the gap. As if it was the Bermuda Triangle, Appliancesonline capsized in the same spot and suddenly it was race on.

The final windward leg to the finish had the crowd cheering as punters encouraged their respective teams and the two leaders headed for home.

It was an exciting finish to a highly competitive season which also produced a number of quality new, young teams.