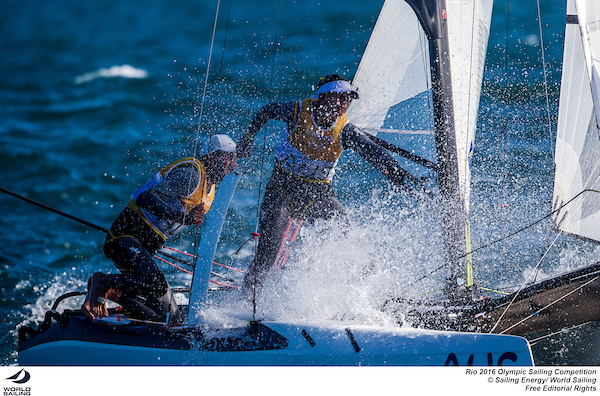 It was a grim day for Australia in the waters off Marina Da Gloria in Rio de Janeiro today as one after another of yesterday's heroes fell by the wayside. Instead of looking good chances for medals in five of the ten classes, at the end of today only Tom Burton's probable Silver medal and Mat Belcher and Will Ryan in the 470 are in the top three.

But it was the Nacra 17 where Australia's hopes were so suddenly dashed.

All started well when Jason Waterhouse and Lisa Darmanin won the tenth race of the series and most of their rivals finished down the fleet. They started  the race well, worked the right-hand side and once they hit the lead they were never in any danger.

But in the next race, they got caught at the boat end at the start and although going across the line at speed, could not find clear air.

A stack-up of boats at the top mark made the situation worse and while those in the bottom half of the fleet worked each other over, Santiago Lange and Cecelia Saroli of Argentina followed the Swiss boat across the line and moved to within five points of the Aussies in the overall standings.

But if Waterhouse and Darmanin were disappointed with their 12th place in that race, worse was to come. In th final race of the day they and were last all the way up the first beat, even behind the Tunisians who have been tail-end charlies for the whole regatta.

While normally the Australians would have picked off the back markers, they were unable to make much progress until the final run, where they moved up to 17th, which became their discard.

Waterhouse explained that they had decided early in the day that the breeze was going to go right so they committed to that side of the course and it just didn't work out.

While still a very good prospect for a medal, sitting in fourth place, they are nine points off the Gold – not insurmountable in a fast class like the Nacra where a bad mistake can cost hundreds of metres and five or six places. But it means they have to put five boats between them and the Argentinians.

Also standing between the Australians and a medal are Vittorio Bassaro and Silvia Sicouri (ITA) who are four points ahead of them and Thomas Jazac and Tanya Frank of Austria.

Five points behind the Australians are their training partners Gemma Jones and Jason Saunders of New Zealand, so we are in for a treat when this medal race gets underway on Tuesday.