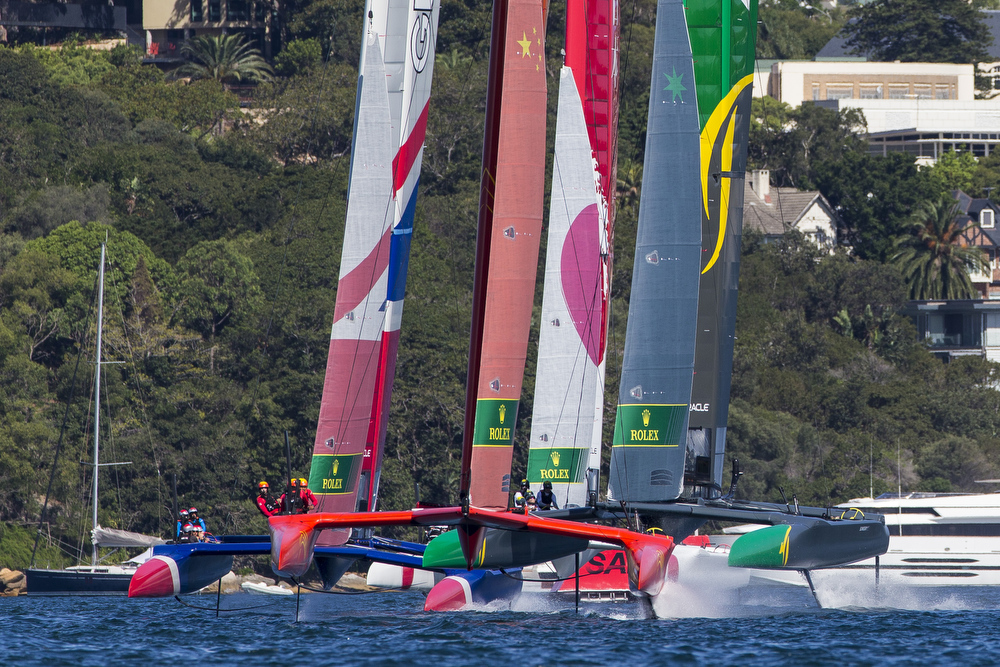 Getting off the start line at speed. Photo Andrea Francolini.

The second day of the inaugural SailGP on Sydney Harbour was sailed in light conditions, with just 10 knots of easterly as the six boats made their way out to the start line. However, as we saw yesterday, this is enough wind to get the 50ft former America's Cup catamarans out of the water, on to their foils and flying at close to 30 knots.

As he did in the second and third races yesterday, Tom Slingsby lined the Australians up to windward and hit the line perfectly. The green and gold wing sail was prominent around the reach mark, with GBR and Japan in hot pursuit.

At speeds of just under 30 knots, the six cats flew down the course with no change to the order as they swept through the gate.

Slingsby went right while all but Japan chose the other side. The right paid and Nathan Outteridge's Japanese team moved past the Brits. A perfectly executed foiling tack by Slingsby's crew saw the Australians extend their lead. The variable winds were giving opportunities to pass and GBR moved back into second place.

The second run was a cake walk for the Aussies, who laid the gate with just one gybe before heading up the right hand side yet again. Behind them – a long way behind them – GBR was comfortably in second, ahead of Japan, USA, France and China.

Outteridge again went right on the beat and crossed ahead of GBR. This battle became the focus for the spectators, as the Aussies had vanished into the distance, again executing their tacks with precision. The top of the course was offering much lighter pressure and at times even Australian flight controller, Jason Waterhouse, couldn't keep the hulls out of the water. But the set-back was short-lived and another great run to the finish saw a comfortable victory.

It was now a question of whether the British could do Australia a favour and put themselves ahead of Japan, who had led the regatta by a single point coming into this race. They could not. Outteridge sailed a superb final run to finish 1 minute 40 behind the Aussies, and the series points were level.

Great Britain improved their hold on third place overall, with France, USA and China finishing in that order.

In the pre-start, Slingsby was blocked from his preferred windward end and the Aussies and the British were well behind at the gun. It was Phil Robertson's China Team that led, back to the form that saw them take second place in the first race on Friday.

However, the Aussies quickly found clear air and were clearly five to six knots faster on the run, catching all but China by the bottom mark. Outteridge was having his own problems and was behind USA and France, as well as the two leaders.

Match racing champion Robertson forced Slingsby to tack away to the right, but when they came back together, Slingsby on starboard snuck across the Chinese bows for the closest of crosses. When they came back together, the margin was more comfortable, but Robertson was holding his lead over USA, France and Japan, who were locked in their own battle.

At the top mark, Slingsby's lead had grown to 10 seconds over China, who were a similar margin ahead of USA, France and Japan, in that order. But now in clear air, Australia bolted away. Down, up, down, the next three legs flew past and Slingsby had made it four wins from five races.

Behind him, Outteridge had finally found some boat speed and moved past USA into third, after a close encounter at the bottom mark. Great Britain had overcome their terrible start and also joined the fight, as did France. It would be an epic battle for the four of them.

With the fleet racing decided in Australia's favour, by two points, attention turned to the mouth-watering prospect of great mates and fierce rivals Tom Slingsby and Nathan Outteridge going head-to-head in the match race which would decide the overall regatta winner. Fleet racing points were of no value now – the winner of the match would take the series lead.

With 30 seconds to go to the gun, Outteridge engaged the battle, trying to push Slingsby over early. But Slingsby countered and had the windward advantage on the first, short reach. Pushing Outteridge past the mark, he bore away and held a three boat length lead as both crews ran downwind at speeds of around 30 knots.

A nice gybe by the Australians saw them lead by 200 metres before another gybe through the gate allowed Outteridge to close up. Slingsby went left while Outteridge, who always says “you can't beat someone by following them” went right.

At the first cross, the Australians held the upper hand and placed a loose cover on Japan from the comfort of 100 metres further up the course. Sailing right up to Shark Island, Outteridge was losing pressure and had to tack back. This time Slingsby ignored him and sailed for the mark. This manoeuvre restored the lead to 200 metres and the Aussies were flying down wind.

Again, Outteridge tried to split but by now the Aussies could simply sail their own race. Hitting 34 knots, they swept through the bottom gate over 30 seconds in front. Only an error could cost Slingsby the title but the crew was sailing perfectly, as they had done since their poor performance in the first race on Friday.

Another beat and the final run down wind, and the Australian spectators packing Shark Island were cheering their national team home. As they crossed the line, Tom Slingsby punched the air. There were hugs and hand shakes all round as the home team celebrated.

Briefly ashore, still taking Australia's win in, Slingsby said: “I learned from yesterday more than I thought we would.”

Of the final race, the NSW Central Coast sailor commented, “I didn't want to be leeward boat at the start; we wouldn't have control, so I'm happy we got the good start we did.

“I don't know how it looked to the spectators, but I felt it was very close for a while. It would have taken one mistake on our part and Nathan would have sailed through us.”

The second event of the series will be in San Francisco, where both Slingsby and Outteridge raced in the America's Cup in 2013. Battle will be resumed, and all six teams will spend the time examining the data from on board their rivals, looking to close the gaps.