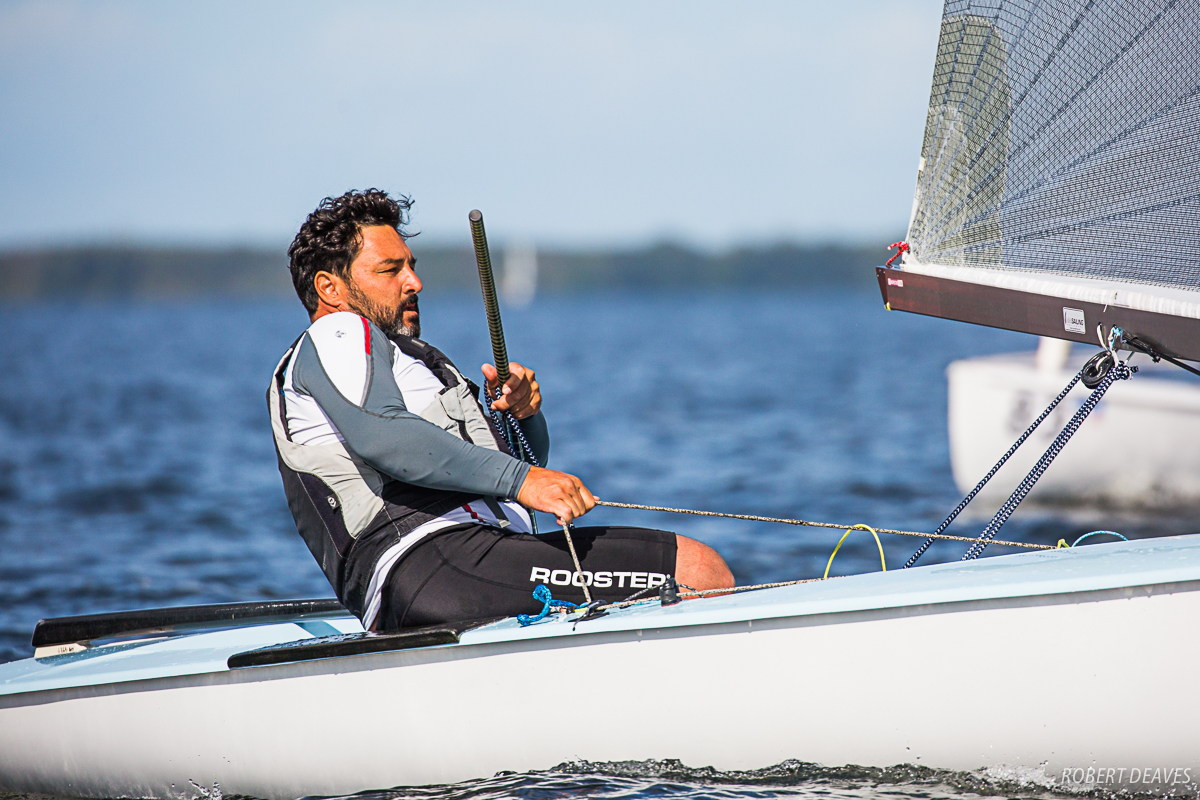 Filipe Silva, from Portugal has won the second Finn European Masters after a frustrating final day in Schwerin, Germany where Bas de Waal (NED) secured second overall, while winner of the only race, André Budzien, picked up third place.

After a week of great sailing conditions for the 65 sailors from 15 nations, Saturday was always forecast to be the lightest and trickiest day of the championship and so it turned out to be.

Race officials worked tirelessly to reset the course and move marks to each new wind direction, but it took more than two hours waiting to get Race 7 away and the first attempt at that was abandoned half way up the first leg after a huge wind shift.

The next attempt got away first time with Felix Denikaev leading the fleet around the top mark from Antal Székely from Hungary and Lawrence Crispin, from Britain. Székely led at the gate but Budzien was catching up fast.

Coming into the final mark he passed Székely and then attacked Gebhardt Zdenek, from Czech Republic just before the final mark. Zdenek fouled and after doing turns, Budzien led down to the finish line to win from Székely with Maksym Krukovskyi, from Ukraine, crossing in third.

After a further wait, Race 8 was started but the wind really wasn’t cooperating and shortly after the top mark, the race was abandoned and fleet sent back to the club. The Championship was over.

Silva was elated at the win. After only two years in the class he said he had no expectations: “It was a great event, a very nicely organised event here in Schwerin. We were expecting a few more boats, but a fleet of 65 is still excellent to race against.

“We had all conditions. Up to 20 knots on two days and today very low winds, so it was a bit of a rollercoaster for me today but I managed to hang on to the lead so it’s very positive for me.”

“I started sailing a Finn two years ago, so my first regatta was in Spain. And after that I gradually started doing some international events. This is my first victory so it has a special flavour, so I feel very happy.”

Commenting on the standard of the fleet here, he said “In the Finn class we always have good sailors. At the end of the day we are sailing with ex world champions, ex medalists, so it is very rewarding to win an event like this one.”

“I had no expectations to be honest. It was an open book. It started well and it finished well, so that’s the most important thing. It was really good and I feel really happy.”

He previously sailed Lasers and trialled for the Sydney Olympics in the Portuguese Sailing Team and then stopped sailing small boats.

“I have sailed Dragons since then and SB20, but going back to the dinghy, I was about 20 years without hiking so it was a bit of a shock.”