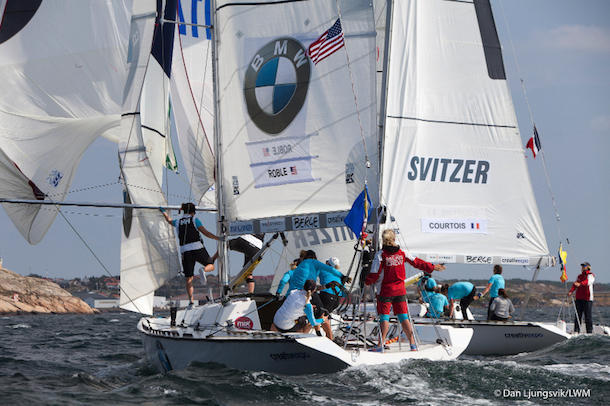 Anna östling lost just one match in her quarterfinal, while all the other semi finalists went with a clean sweep through theirs. The Swedish World #2 will in her semi final face either fellow club member Caroline Sylvan of the Royal Gothenburg Yacht Club, Danish World #1 Camilla Ulrikkeholm Klinkby or Stephanie Roble of the USA. As the winner of the round-robin stage, the latter has the advantage of choosing her semi final opponent:

“My crew and I will discuss that during the evening, and reveal our choice Saturday morning” Roble smiles mysteriously, pleased with being undefeated so far:

“It’s been great action all week, but tomorrow it’ll be even tighter and tougher,” she predicts.

Only looking at the Friday results sheet of Lysekil Women’s Match, the 2nd stage of the 2015 WIM Series, one would think that four rather easy quarterfinals were sailed. But that was certainly not the case. The crowds who had flocked to the cliffs of Släggö Island, in the Western Sweden sailing metropolis Lysekil, saw world class match-racing as the fights for the coveted semi final slots went harder and harder. In one of the matches four times Lysekil winner Camilla Ulrikkeholm Klinkby sailed Alexa Bezel way past the bottom mark, causing the Swiss skipper so much trouble with the spinnaker that she had to withdraw from the match. And that episode was just one example of all the spectacular moves that took advantage of the rules and the match-racing tactics playbook:

“I see no reason not to fully go for it. The closer to the end of the regatta we get, the more important it will be to do that,” the Dane says, aiming for her fifth consecutive victory.

“We’ve raced together for a long time, we know each other very well and our crew work is nothing but outstanding. All this gives us every opportunity to sail tactically exactly as we wish,” she adds.

“Now the opposition will get even tougher than earlier this week. It’ll be fun for us and great fun for the spectators,” östling says, while compatriot Sylvan agrees:

“We’ll have to be on our toes all the time, with no room to relax. In today’s quarterfinals we found our speed again, with three fantastic races against experienced Anne-Claire Le Berre. We’re feeling safe and confident for any semi final opponent,” Caroline Sylvan says.