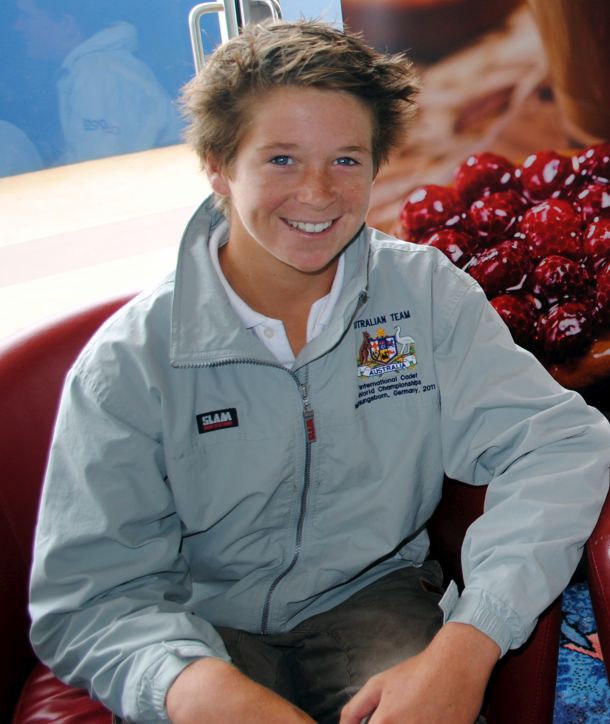 Australia has won the International Cadet World championship for the second consecutive year, with the Tasmanian crew of Sam Abel and Hugo Allison becoming 2015 champions off Riva on Italy’s Lake Garda overnight.

Abel (15) and Allison (10) finished third in the 12th and final race of the regatta for a net 35 points, three ahead of the British crew of Archie Penn and Hazel Whittle, who ended with a net 38 points after placing second in the last race.

Third overall went to the Ukrainian crew of Yehor Samarin and Maksim Remez, who won the final race to end the regatta with 48 points.

Another Tasmanian crew, Angus Price and Archer Ibbott, finished fourth and five of the seven Australian crews finished in the top eleven placings in the 58 boat fleet from a dozen nations.

The two top placed Australian crews are from Hobart’s Sandy Bay Sailing Club, a small dinghy club on the foreshores of Nutgrove Beach and the home of Tasmania’s only fleet of International Cadets.

The victory on Lake Garda is the eighth time an Australian crew has won the World championship in the International Cadet dinghy since 1970, with Abel and Allison the fourth crew from Sandy Bay Sailing Club to win the Worlds.

The success of the Australian team on Lake Garda is a tribute to the coaching of Geelong-based sailmaker and yachtsman Tony Bull in achieving consecutive World champions with Abel and Allison following the 2014 win by Royal Geelong Yacht Club crew of Thomas and Sophie Alexander.

Two-times World champion Paul Burnell and a past Commodore of Sandy Bay Sailing Club, today described the victory as “fantastic for the Club, for Tasmania and Australia.”

“The win by Sam and Hugo carries on a great family tradition in Cadet dinghy sailing at Sandy Bay Sailing Club – Sam’s mother Jill, Hugo’s mother Felicity and I all went to Spain in 1982 as crew for older skippers and now all our children have followed on as Cadet sailors.

“Although Hugo is only ten yet this has been his third World championship regatta, a world title now added to his Australian championship win as crew for Sam Tiedemann a couple of years back.

“Sam has been sailing since he was seven, starting as crew for my son Oliver….so we are all very excited at the wonderful outcome overnight,” Burnell added.

Australia had two new world champions in Sam Abel and Hugo Allison. In the last race of the International Cadet World Championship they went out and did exactly what was required. They not only protected their lead but increased it to win the title by a comprehensive 10 points. Their composure and maturity saw them weather a potentially nervous day with aplomb.

The day was interesting with an AP flag up early and very hot and humid conditions ashore. When the Ora did arrive it built into a nice breeze, possibly the best sailing breeze we had in the regatta.

A general recall was instigated in the first start with most of the fleet over the line. The race committee swung into black flag mode for the next start just to increase the nervous tension. Sam and Hugo got away to a solid yet safe start and at first cross had a handy lead on GBR team Archie Penn and Hazel Whittle. From there on they had a comfortable race to keep ahead of the British team.

Ukrainian sailors Yehor Samarin and Maksim Remez continued their strong finish to the regatta and clinched third spot behind the Australian and English boats with a good win.

In 4th place was another Australian crew in Angus Price and Archer Ibbot who sailed a great series with strong consistent results with 4 podium finishes (including a heat win) in the twelve race series.

Next Australians were Julian Sasson and Mischa Suda in 8th spot and Marty Hood and Jack O Donnell in 9th, 4 Australians in top ten makes for a very proud Australian coach.

Other Australian placings were Will and Laura Cooper in 14th and Ollie Manton/ Ben Garner and Dominic Randall/ Ella Purnell in mid fleet.
Over in the provisional fleet, Alanna and Cooper Field improved over the course of the regatta to finish 7th. Alanna along with Will and Dom are still on their learning curve and looking ahead to Argentina next year. With natural improvement they will be a force to be reckoned with.

All in all a very good regatta for Australian Cadet Sailing, many thanks to the wonderful supporters. The following and good wishes we received were amazing. To all the parents, grandparents and friends who came to Riva Del Garda (we numbered 60 at our team dinner) a huge thanks. Team manager Chris Manton was another who was instrumental in the team success. And a huge thanks to Toll Group and QBE insurance for your sponsorship. You have given some great kids a great opportunity.