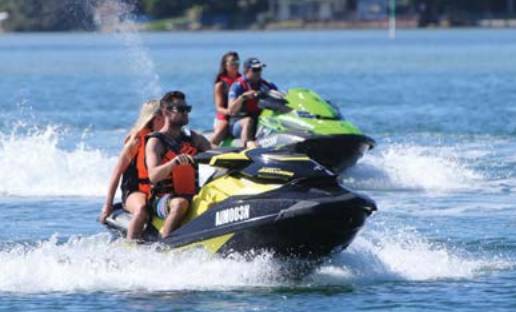 Fifty jet skiers were fined over the weekend in NSW Maritime's Operation Elanora. This included two people who received $500 on-the-spot fines for operating a jet ski without a licence on a Sydney waterway.

During the weekend, 62 Boating Safety Officers carried out more than 900 random safety checks of boaters and jet ski riders over the two day compliance blitz across the Sydney basin including Botany Bay, Port Hacking and the Georges River as well as the Hawkesbury region.

NSW Maritime Executive Director Mark Hutchings said the $500 fines, which jump to $750 for second or subsequent offences and possible disqualification for obtaining a licence for two years, were issued during the weekend's focus on jet ski speed, irregular or dangerous riding and belligerent behaviour during Operation Elanora.

“In addition, the owners of jet skis face another $500 penalty for allowing an unlicensed rider to use the craft,” he said.

“Fifty penalty notices were issued over the weekend with the top three reasons being not wearing a lifejacket (18 including recreational vessels), excessive speed (18) and dangerous riding (5).

“If you're doing the wrong thing, you will get caught and if it's not next week, it will be the week after.

Read the full story at the Leader.