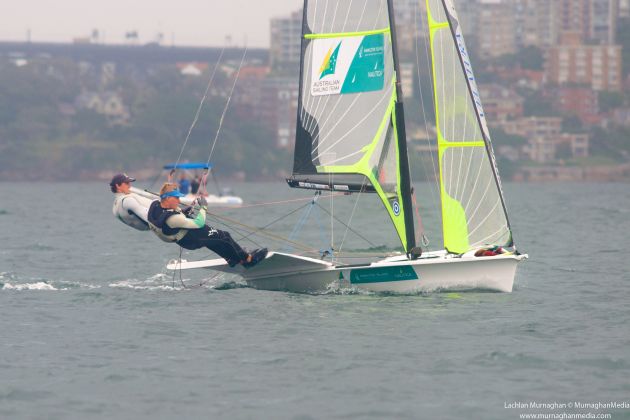 Gilmour and Brake sailing together for the first time. Photo Lachlan Murnaghan.

Racing at the 2016 SPLASH Festival events was interrupted today by varied weather conditions. Sailors competing in the Zhik Australian 9er Championship and Australian 420 Championship battled through challenging winds to record results today. Unfortunately for the 16 boats competing at the Australian I14 Championship, there was no racing today.

Ahead of tomorrow’s reserve day, it was the intention of the PRO’s Rob Lowndes (420 / Delta Course) and Peter Moor (Skiffs / Charlie Course) to finish a full compliment of racing – making the most of the sailor’s day in lieu. However, as most sailors would have predicted, Huey did not co-operate. This leaves the 420s, 49ers and 49erFXs one race behind schedule, the I14s two races down after losing the entire day.  The young (and young at heart) 29er fleet only completed two of the four races scheduled for today.

On Charlie course, Moor got racing underway late, thanks to mixed ESE conditions that was predicted to settle throughout the day. Due to the delay with the 9ers Moor decided to hold the I14s on shore. Over the next four hours, sailors saw rain, wind and eventually a glass out.

Over on Delta, Lowndes had trouble setting a course, with rainsqualls shifting the wind over 30 degrees. It wasn’t until 1400 an hour after the scheduled start that the 420s began their first race of the day, which was eventually shortened by the race committee. The second race was completed in stronger winds, but it was no less frustrating than the first race.

I14
PRO Peter Moor made the decision to cancel I14 racing, after the 49er and 49erFX fleets timed out – meaning they exceeding the set time limit for the race. This meant that the I14s did not complete any racing today.

420
The 420s were moved to an inshore course today, laying up towards Watsons Bay, with the left side of the course providing significantly more pressure without even considering the angle. In the first race, Madison Taylor and

Orla Mulholland-Patterson handled the light winds with aplomb, rounding the first top mark in second place before overcoming the race leaders and snatching the win.

Holding on to their overnight lead, Nicholas Sharman and James Grogan posted their worst result of a series, with a sixth place in race 3. The Victorians redeemed themselves, returning to the top of the scoreboard with a win in race four.

Sophie McIntosh and Emily Summerell dropped to sixth overall, however this does not affect their position of first all-girl team.

29er
John Cooley and Simon Hoffman’s ‘picket fence’ of first place scores remains intact, after taking out the fourth and fifth races of the series.

The boys lead in convincing fashion, with the ‘main goal for us in Oman for the Youth Worlds – it’s important that we step up here- which we’ve been doing so far,’ a humble Cooley said, as he tucked into some pre-race pasta.

It’s suggested that his home town knowledge helps and he’s not afraid to admit it either, ‘I train here so much – yesterday they moved the course for the last race, no one was ready or knew where to go, but we had a pretty good idea since we’ve experienced it so many times before – a few times today a few familiar things happened, so that definitely helps,’

Help, it may and it’s surely assisting the pair’s confidence, as Cooley wasn’t fazed that his competitors had seen a potential flaw in his scoreboard and sailing today. Before the 6th race of the series was abandoned, Cooley and Hoffman were ‘deep’ in the results: ‘The main thing is to keep consistent, we weren’t paying attention and sort of missed it all – we have a lot of banter, it keeps it lively, especially in the rain!’

The minor placing positions also remain the same as Tom Crockett and Tom Grimes sit in second, ahead of the first all-girl team Natasha Bryant and Annie Wilmot in third place.

The 29ers will be the only fleet to take advantage of the scheduled reserve day, as the race management team hopes to make up for today’s lost races.

49er
David Gilmour and Lewis Brake’s remain at the top of the leaderboard, after posting a 1, 1, 3 leaving the last win of the day to his younger brother, Sam and his crew, Cameron Seagreen.

Gilmour and Brake’s scoreboard reads like that of a seasoned team, only dropping two races throughout the six races so far. However, today was the second time they had ever raced together, showing fantastic potential for the team in the future.

Second overall in the 49ers is the young team of Harry Price and Harry Morton, who’s consistent boat speed and subsequent results gives them a real chance to knock Gilmour and Brake off the top spot.

Third place is Gilmour’s middle brother Sam and his crew Cameron Seagreen. According to Dave, this is the first time he has been beaten by his brother, ‘we’re competitive, but they’re new to the 49er – once they’ve been around for a while, it will become more intense.’

49erFX
The 49erFX lead is still held by Olivia Price and Eliza Solly, who unfortunately retired after a minor injury. The racing against second placed, Tess Lloyd and Caitlin Elks was much tighter today, with both crews demonstrating their light air skills – and their ability to adapt to a range of conditions.

Like the 49ers, the 49erFX sailors ‘timed out’ during the last race, meaning a ‘DNC’ on the board for those who attempted to complete the course in glassy conditions.

Tomorrow
There will be a reduced race schedule tomorrow, with only one racecourse employed. Charlie course will only host the 29ers as the other classes enjoy a ‘reserve day’. This will provide much-needed lull in the program for the dedicated volunteers and staff of the SPLASH Festival and Woollahra Sailing Club.

Until now, the regatta leaders have remained the same from day one, and with three more days of official racing (four for the 29er class) sailors will be looking or their own spot at the top of the scoreboard. But, if the leaders continue, imagine the story it would make…