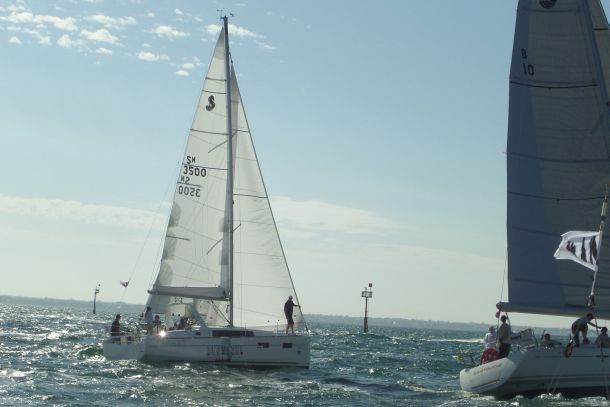 Last January the final Festival of Sails fleet tallied 239 boats. Entries for this year’s Festival, presented by Rex Gorell Land Rover, sit at 221 as of today with the paperwork deadline midnight this Friday, January 15, before a late fee applies. The absolute cut-off for boat owners to register is Monday January 18. Enter here

“We always get a late push in the last few days; I’d like to get another 10 entries but regardless of the final count it’s a really great fleet that will be racing across 11 or 12 divisions over the long weekend,” said Principal Race Officer Denis Thompson.

Vertigo is entered in the Rating Series and Goode says: “I really enjoyed the close competition last year, and the adrenalin rush of a big starting line-up. We had somewhat mixed results so we’re back for more!”

From January 22 – 26, 2016, boats of all ages and sizes from multiple Port Phillip yacht clubs will meet up with those trailered and delivered by ocean from Queensland, Western Australia, Tasmania, South Australia, New South Wales and the ACT for the southern hemisphere’s largest keelboat regatta, now 173 years on.

Sports boats and VX Ones set off proceedings on Corio Bay on January 22 but the big opening act is the mass start of the historic Passage Race on Saturday January 23 from Williamstown to Geelong. The first skipper aged 25 or under with a majority of under 25 crew to cross the finish line will receive the inaugural Gill Australia Under 25 Trophy and the inaugural Deakin University Helmswoman Trophy will be awarded to the first female helm in the Passage Race.

Sailors’ family and friends and the general public making the most of the Australia Day holiday weekend can sample a huge variety of food choices and soak up the always sensational free entertainment for all ages across multiple entertainment districts courtesy of the host Royal Geelong Yacht Club and Geelong Connected Communities. View the entertainment guide.

All information relating to the Festival of Sails 2016 is on the website www.festivalofsails.com.au