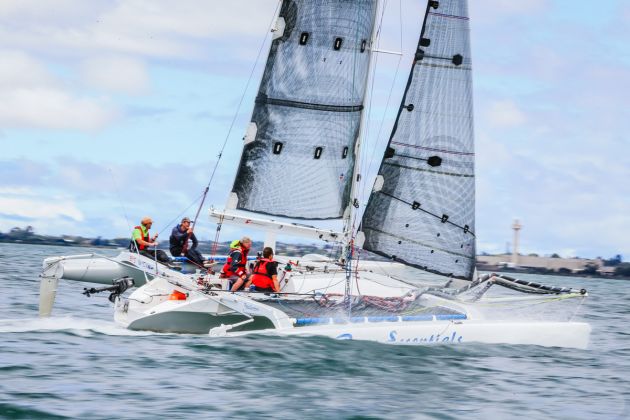 The solo seal ducking traffic in the Hopetoun Channel as 276 boats of all sizes cut through the waters of Geelong’s inner and outer Corio Bay could not be blamed for wondering about the illogicality of humans – it was hard enough for some of them to work out where each fleet was going on day three of racing at the 173rd Festival of Sails.

Monohulls and multihulls meandered around passage course marks in the 12 knot average afternoon sea breeze, creating a brilliant spectacle in the summer sunshine when their multi-coloured spinnakers were full. Others ticking off tight short course races had less time to think and act as their race officers peeled off quick starts.

Full results for every division at http://www.topyacht.net.au/results/2016/fos/index.htm

Consistent top three results for Rod Warren’s J111 Joust have them leading this newly introduced division based on a concept that has “a mixture of boats that are similar yet dissimilar,” Warren explains. “We are the only Cat 1 offshore capable boat among the fleet; it’s an interesting mix but it seems to be working, and it’s good fun.” National Taser champion Aaron Linton is doing a top job for Warren as tactician.

Second is Damian Thomas’ Melges 32 PP1 and third is Cam Rae’s repaired Thompson 920 Poco Loco thanks to a 4,2,2 scorecard in today’s three windward/leewards.

This is the first major Australian regatta for the new FarEast 28Rs and Queensland skipper Gerrit Veenemans and his crew built on yesterday’s opening outing to be eighth overall among the Super 11 fleet. Downwind rides of 16 knots of boat speed were a highpoint of their day on the rare north-facing bay.

Rating Series leader Geoff Boettcher has a chip on his shoulder; Tony Kirby’s Sydney based Patrice.

Boettcher’s TP52 Secret Mens Business from the Cruising Yacht Club of South Australia sits on 9 points at the halfway point of their division 1 series, and Kirby’s men who are hounding them are also on 9 points.

Both skippers have stacked their crew list with talent, mainsheet on Barney Walker is one who has done the miles and his take on today was, “It’s all going well; it’s going to be a close finish for sure. We did well on the 50-footers. We are smaller and don’t have a clear air and we were bounced around a bit. The boat did the work and we stayed clean, and kept the mistakes down.”

Rain squalls on outer Corio Bay shifted the breeze from ESE to SSW but it mostly stayed sou’easterly with a maximum of 15 knots reported on IRC rating course F.

Day two of the Festival of Sails was intense for Cruising AMS division 1 pointscore leader Mark Bulka and his Dufour 44 Balance. “Our for’ard hand rang in sick this morning so we had rock paper scissors on who would do the bow. We have a boat full of helmsman so we’ve got plenty of tactical ability but not so much mechanical ability. It’s been a great regatta so far, the Royal Geelong Yacht Club’s doing a great job.”

All divisions race tomorrow, Monday January 25, on multiple courses starting from 1100hrs. An early evening twilight race off the Geelong waterfront will mark the stunning series finish for the large cruising fleets and the key Bausele VX One and Morris Finance Sydney 38 Australian titles.

Australia Day on Tuesday, January 26, 2016 is not just a day of national celebration marking the anniversary of the 1788 arrival of the First Fleet of British Ships at Port Jackson, New South Wales. It is also the final day of the Festival presented by Rex Gorell Land Rover and end of the regatta for the Rating, Performance Racing, S80 and Super 11 divisions.

Tomorrow’s forecast is southerly winds 15-20 knots with seas around 1 metre and cloudy.

Shoreside there was plenty of entertainment for festival goers young and old – from beach volleyball and children’s entertainment to waterski shows, live music, paddle boarding and Rex Gorell Land Rover’s four-wheel driving experience at the Terrapod. The flyboarders were a crowd favourite, attracting plenty of cheer with their daring hydro-board acrobatics.

Monday promises even more excitement at the Shoreside Festival – made possible by Geelong Connected Communities – with beach volleyball tournaments, three flyboarding shows, live performances from Children of the Sun and Taxiride, plenty of food trucks and market stalls as well as Geelong’s spectacular fireworks display on Australia Day Eve.