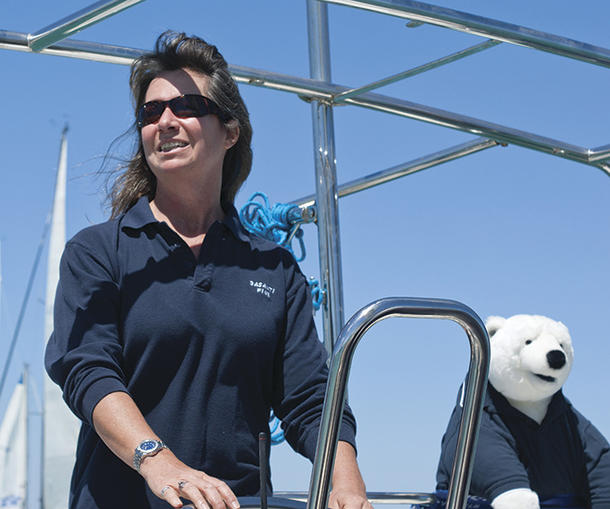 It was late in May and we found Pearl quietly floating in her pen awaiting her next charter adventure.

It was terrific to be on a boat again and looking forward to a few days afloat. She was very clean and tidy and we placed our things in a cabin.

Phil and I had been RVing around the USA for six months (an awesome experience) and ready for a sea change, however brief. We were in the far north of Wisconsin on the shores of Lake Superior.

There was still a nip in the air but the marina was busy launching boats ready for the season.

Our friends and co-charterers were not due for a few hours so we made the short drive into Bayfield for a look. Not much was open so early in the season, but we found a bar and grill offering basic fare.

A salty looking character nursed a beer at the bar and he turned out to be Dave, our check-out captain from the charter company. Coincidence?

Well, it is a small town in northern Wisconsin.

Lori and Jane arrived at the marina and we all settled in for our first night aboard. This was a reunion of sorts. I grew up in Wisconsin and attended university with Jane and Lori. In the early 1990s we had enjoyed chartering here as relative youngsters.

Phil was outnumbered, but tolerant of all our stories from “the good old days”.

We were all awake early, eager with anticipation.

The shower and lounge facilities at Pikes Bay Marina were spotless, modern and luxurious. Captain Dave appeared on time to run through Pearl’s systems and safety gear, give us a few destination tips, provide answers to any questions and we were off.

Perfect sailing conditions on pristine waters took us northeast to Stockton Island for our first anchorage.

Lake Superior is the largest, deepest and cleanest of the Great Lakes. The islands formed as a result of waves and erosion when the glaciers melted.

Today the northern sides of the islands tend to be steep with bluffs and caves, while the southern ends of the islands offer lovely, sandy anchorages with good holding and clear water.

There is an average of two miles between islands making for pleasant day sails in over 100 feet of water.

Winters see the lake freeze over, perhaps not completely but certainly along the shore areas and this makes for shockingly cold water. In warmer months kayaking and canoeing are popular around the islands. There are camping areas on 18 of the islands, offering flush or vault toilets, water, picnic tables, fire rings and bear-proof food lockers. Yes, black bears share these islands and we saw signs of bears, but they are fairly shy creatures that avoid noisy hikers.

The islands are beautifully forested and hiking trails are plentiful, well marked and in good condition.

We had hiked and explored a bit of Stockton Island and it was Phil’s night to cook. He whipped up a terrific penne Arrabiatta and a special surprise for Jane’s birthday, chocolate mud cake. Yum!

Is there anything better than food, friends wine and chocolate cake at anchor?

Next morning we had a problem, the battery was flat.

The boat carries an emergency battery pack to start the engine, but this too was flat. Eventually the charter company sent someone out with a new battery, but this experience highlighted the pitfalls of storing boats through the long Wisconsin winters and being the first charterers of the new season.

Lori decided a piece of cake would cheer us all up and it was well past lunchtime when we set sail for Rasberry Island.

There are eight historic lighthouses on six of the islands and these are popular hiking destinations. Along the way we spotted lighthouses and practiced coastal navigation skills before Phil moved on to teaching Jane and Lori some knots.

Once at our destination, we set the anchor and there was time for a trip ashore to explore the beach, then it was back to Pearl for Lori’s chicken and zucchini specialty with Jane’s fresh salad all followed by more of the now famous mud cake.

Our final day was overcast, maybe a reflection on our thoughts of having to depart this idylic part of the world?

Pearl wasn’t due back until 1500 but Lori and Jane had long drives to southern Wisconsin, so we sailed away early, only to find the breeze on the nose most of the way back to base.

Back in the pen, or slip as they are called in the US, we secured Pearl, packed our things and cleaned up after ourselves.

Lori and Jane bid us adieux and took their leave while Phil and I moved back into our RV to explore a bit more of the area.