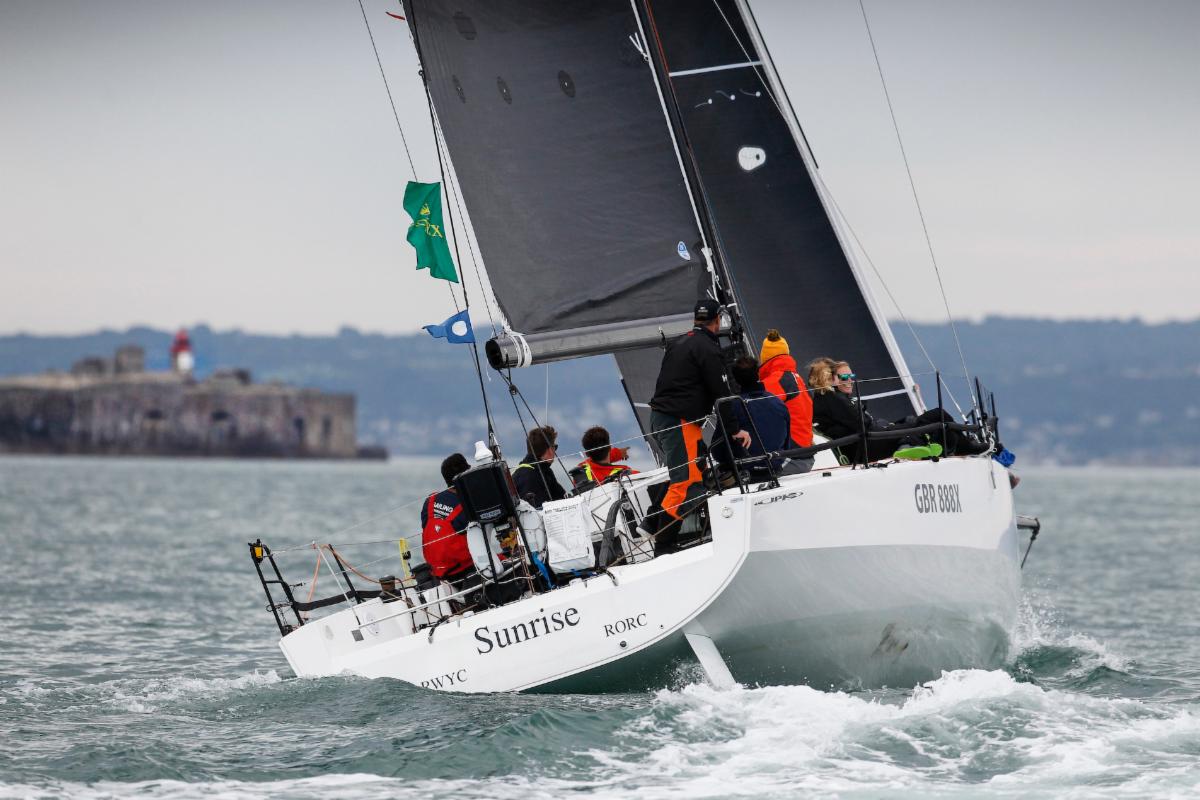 The Devonshire team crossed the Cherbourg finish line at 1004 BST this morning. Sunrise’s corrected time of 4 days, 6 hours, 45 minutes 4 seconds has given Kneen IRC Two victory by a huge margin.

After a hideous outbound beat down the Channel, when they never seemed to be in phase with the tide, Sunrise’s first break came after making the last minute call to go up the eastern side of the traffic separation scheme at Land’s End with Il Corvo as the majority of the frontrunners chose to go up the TSS’s west side.

Rounding the Fastnet Rock on Tuesday mid-evening, Sunrise already had pulled out a 1 hour 12 minute lead under corrected time.

But the key moment of her race came as, while she was forging past the Lizard, the wind utterly switched off for those astern as an area of high pressure rolled over them.

“There was a big ridge chasing us at 10 knots, so we just had to go faster than 10 knots the whole way down there,” explained Dave Swete, Sunrise’s sole pro sailor. “It never caught us, but it caught the rest of the guys.

“The key moment for us was at the Scilly Isles when we were trying to hold on to the original wind to get us safely into the Channel. All of our weather routing said we’d be stuck in the light pressure, and we had chosen the sails that we believed we needed to deal with that.”

From there, the crew kept their fingers crossed, while looking over their shoulders. As they arrived in Cherbourg having straight-lined it from the Scilly Isles, their competitors were still on a very different part of the chart.

“We feel very fortunate to have made it here, arriving at a good time for the strong tides just before the finish,” said Kneen. “But there really was no relaxing until we actually crossed the finish line. Nothing is ever certain in this game.”

Meanwhile the rest of IRC Two over the course of the early hours this morning compressed into a tight bunch to the west and south of the Scilly Isles as they parked up, unable to break free of the clutches of the ridge. Their restart only occurred at around 0600 this morning. This afternoon they were well on their way to the western side of the Casquets TSS.

Of this group Fastwave 6 was the only one brave enough to attempt to extract themselves from the ridge by sailing south of the TSS to the south of the Scilly Isles with limited success. Based on current progress, this group is expected to finish on Friday morning.

The Scilly Isles parking lot also had a devastating effect on IRC Three. The lead trio coming into it – Louis-Marie Dussere’s JPK 1080 Raging-bee²; Alexis Loison and Guillaume Pirouelle’s JPK 1030 Léon, followed by Philippe Girardin’s J/120 Hey Jude – rounded the east side of the TSS to the west of the Scilly Isles only to hit the meteorological brick wall mid-evening yesterday.

The Sun Fast 3600 Fujitsu British Soldier faired worse rounding the west side of the TSS, landed themselves in the embrace of the high earlier.

Sneaking ahead of the previous front three is Aileau, the JPK 10.80 of Olivier Burgaud and Sylvain Pontu. Swell was making 9.4 knots but on a course suggesting they may be looking for relief from the Alderney Race south of Alderney this evening.

On board Léon defending champion Alexis Loison will also be wondering what he can do to reclaim the lead of IRC Two-Handed which Swell has taken off him in the overnight reshuffle.

“We had a fast ride up to the Rock – flew the Fractional Zero and pulled masses against the fleet – up to second in IRC Two-Handed at one point. But that’s the thing about yacht racing… we will remember the good bits and bury the bad!”

First Raphael’s crew was unable to cover as they rounded the west side of the TSS to the west of the Scillies as the two British boats, Richard Palmer and Jeremy Waitt on the JPK 10.10 Jangada and Tim Goodhew and Kelvin Matthews on the Sun Fast 3200 Cora, sailed down its east side. However, the Brits found themselves first to be nailed by the ridge as Raphael and the majority of the IRC Four fleet that was behind her were faster to extricate themselves.

Racing doublehanded with Calanach Finlayson on the Sun Fast 3600 Diablo in IRC Three, Nick Martin shared his pain from last night, “I need counselling having sat there for several hours. We did pretty well up to the Rock and were in good shape. The leg back down wasn’t ideal – I think we lost the plan a little bit, but generally we did okay.

“But when we got to the Scillies it just went completely t**s up. We got stuck there with Jangada and Fastrak and Cora and there was nothing we could do about it. All the routing said to go that way, but it didn’t account for this wind loss and the tide was building and it was like a washing machine.”

Having fallen so far behind, Martin said that this afternoon they were trying “something different” and have taken a small flier north towards the Lizard Island in an attempt to reclaim some ground. “The routing saying this is the quickest way to Cherbourg but there are no other boats around. We’ll see if it pays off.”

At midday the IRC Four leaders on the water were fanning out across the Channel due south of the Lizard with Raphael furthest south, with Harry J. Heijst’s S&S 41 Winsome and Vincent and Jacques Rigalleau’s Sun Fast 3200 Enedis immediately to the north, and the Pinteauxs JPK 10.10 Gioia closest to the Lizard. Over the course of this afternoon Raphael has inevitably nosed back into the lead on the water.

However, leading on corrected time seems to be one of the smaller IRC Four boats: Benefitting greatly from the park-up has been Alain Guelennoc’s X-332 Trading-advices.com with Chris Choules’ Sigma 38 With Alacrity and Irish Offshore Sailing’ Sun Fast 37 Desert Star, skippered by Ronan O’Siochru currently second. But you wouldn’t put money on it remaining this way in 24 hours time.