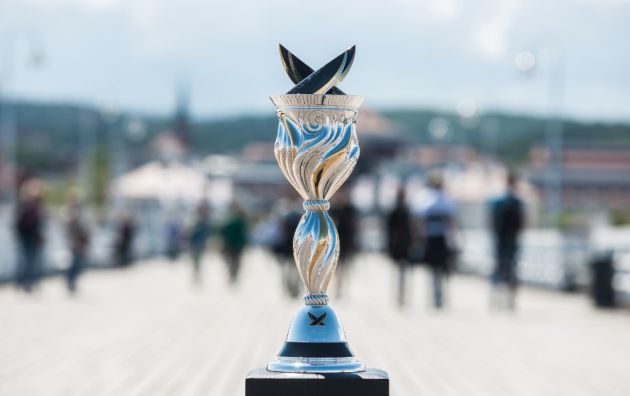 But first, let’s look back at some of the game-changing moments of 2015. Back in March, the world’s longest running professional sailing series launched an expanded 16-event schedule for the 2015/16 world championship season. For the first time since the World Match Racing Tour was founded in 2000, the series awarded championship points to all events on the schedule divided into two categories – World Tour Events and World Championship Events. Skippers would count their highest five results towards the World Championship title.

Getting to the top rungs of the match racing scene has always been tough but, as WMRT’s James Pleasance explained, the new format would provide a valuable pathway for young and ambitious match racing skippers to compete on the world stage. “The Tour has always focused on growing sailing and match racing around the world,” said Pleasance. “By increasing the number of events that award points to the championship leaderboard, more sailors will have the opportunity to participate on the Tour and work their way towards the World Championship.”

In May, the Long Beach Yacht Club in California hosted the two opening events of the 2015/16 World Match Racing Tour season, the Ficker Cup and Congressional Cup. Under the World Match Racing Tour’s new event format, the top six placed skippers from the Ficker Cup were awarded points to the 2015/16 World Championship leaderboard. The top two Ficker Cup skippers also qualified for places at the following week’s opening World Championship Event, The Congressional Cup, which celebrated its 51st edition.

Up-and-coming Kiwi match racing talent, Chris Steele and his team from the Royal New Zealand Yacht Squadron won the Ficker Cup, losing only two races over the three days of hot competition. Dustin Durant of the USA finished runner-up to Steele and booked the other qualifying place in the Congressional Cup.

For the Congressional Cup itself, the big guns rolled into town, not least defending champion Taylor Canfield who went on to beat Phil Robertson in the final, with reigning World Champion from Great Britain, Ian Williams, beating Sweden’s Bjorn Hansen in the Petit Final to take 3rd place.

As the racing progressed throughout the season, big changes were taking place in the background, culminating in a change of ownership of the Tour. At the end of June, it was confirmed that Sweden’s Aston Harald AB had purchased the Tour. The acquisition marked a major step forward for the ISAF-sanctioned World Match Racing Tour, as Aston Harald also announced plans to construct a series of identical M32 high-performance catamarans to be based in the USA, Europe and Asia (subsequently confirmed as Australia), and which would be used at future World Match Racing Tour events.

Håkan Svensson, CEO and owner of Aston Harald, discovered the raw thrill of catamaran racing just a few short years ago but was so enamoured of the M32 lightweight catamaran that he bought the rights to build the boat and market it worldwide. With the America’s Cup now taking place in multihulls, moving the Tour into M32s is a good move that reflects the changing focus at the top levels of the sport.

“Conquering the World Match Racing Tour has proved one of the sport’s toughest challenges,” said Svensson. “With the rapid innovation of top-level sailboat racing and the growing popularity in multihull racing, we’re now in a position to help talented young sailors work toward a career at the highest level of the sport through the M32 Series and now the World Match Racing Tour.”

Now the Tour is in the midst of this rapid transition. The Monsoon Cup concludes the 2015/16 edition of the Tour, and it will be a final opportunity for the keelboat experts to make the most of their skills in Malaysia before the shift to M32 multihulls begins. At the top of the standings, Ian Williams and his GAC Pindar crew are looking to extend their record of five Tour world titles to six, at a tricky venue where they absolutely dominated last year, despite the fickle conditions.

Whoever wins the current Tour will have precious little time for sitting on their winner’s laurels, though. A compressed Championship season begins little over a month later in Fremantle, Western Australia, the first time that the M32s will be used in Tour competition. Below is the full roster of events for the short season.

The Congressional Cup in Long Beach will be the only event where the M32s aren’t used, when the teams will have to dust off their keelboat racing skills in the Catalina 37s.

The first season of the new era then reaches its climax in Marstrand, Sweden, not far from the M32 factory where a hundred catamarans are scheduled for delivery from the purpose-built facility in Hönö, an island just south of Marstrand. Over the course of the five-month season, the teams will compete for a total prize purse of over USD$2 million, with a cool USD$1 million of that reserved for the championship winner in Marstrand. It’s a high-stakes game that is bringing interest in the Tour to an all-time high.

Of the 10 Tour Card entries for 2016, six of those are already well known on the match racing circuit:

The remaining four places were awarded to Sweden’s Mattias Rahm, Denmark’s Nicolai Sehested, France’s Yann Guichard and Sally Barkow of the USA. As well as being a top match racer, Sehested competed aboard Team Vestas in the Volvo Ocean Race, while the other three have all competed at the Olympics. Guichard is best known for his offshore multihull exploits, however, not least his current attempt with Dona Bertarelli to break the Jules Verne Trophy for the fastest non-stop circumnavigation of the globe onboard the maxi trimaran Spindrift 2.

The season finale for the 2015 World Match Racing Tour season kicks off at the Monsoon Cup Malaysia beginning on the 26th January 2016. Based on the final results after the penultimate event in Bermuda, Bjorn Hansen, Taylor Canfield and Ian Williams, will have the best shot at winning the ISAF Match Racing World Championship and a share of the Tour Bonus which stands at USD440,000. The three skippers are separated by just five points.