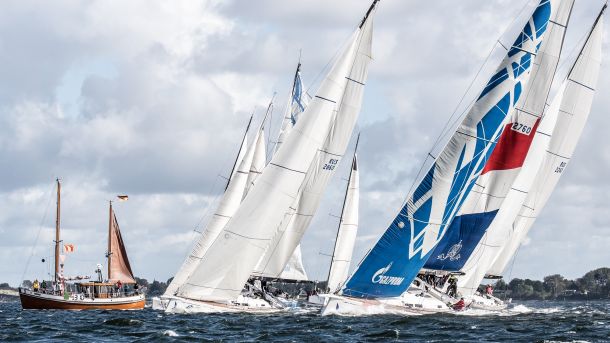 Seven fast offshore racing yachts started theNord Stream Race 2015 on the Flensburg Fjord today. Under perfect sailing conditions they ventured out on the challenging sailing race across the Baltic Sea. The route of the race, which is being organised by Saint Petersburg Yacht Club and Norddeutscher Regatta Verein, is 800 nautical miles long and finishes in Saint Petersburg.

On 12 pm sharp principal race officer Stefan Kunstmann started the race and the fleet of seven yachts dashed away towards the Baltic Sea in sunshine and at wind force five, in gusts up to six. TSAAR PETER had the best start, followed by SPIRIT OF EUROPE – both are currently leading the fleet together.

Stefan Kunstmann’s estimation for the course of the race: “We had another improvement on the forecast overnight so the race is supposed to be even faster. Nowadays we have very reliable forecasts that give us a good indication for the next two to three days. I am expecting that the first boat could finish after only three days and 18 hours. That is not quite the speed record from 2013, but if the pressure increases there might even be the chance of the record being broken.”

The participants have prepared thoroughly for the forthcoming challenge. “We have used digital weather routing and carefully studied the maps for the area,“ said the German crew of SGM, whilst the Russian team “Gazprom Youth Sailing Challenge“ on board TSAAR PETER made sure all sails and equipment had been checked before the start. All participants are conscious of the high demands on crew and material during such a trip.

Living together in a confined space without any privacy can become a challenge, too. “We know each other very well and have sailed many miles together. All are proud and excited to take part,” said Georg Christiansen, the skipper of BROADER VIEW HAMBURG, who is competing against BANK VON BREMEN with skipper Carol Smolawa in the ORC division. Both are experienced offshore sailors and have each completed several Atlantic crossings.

Amongst the Swan 60 division it is probably the crew of defending champion BRONENOSEC who are one of the most experienced. This year they are competing under the leadership of Volvo Ocean Race and America’s Cup veteran Tommaso Chieffi and will try to defend last year’s title. “Our expectations are based on the experiences from the previous years. We are hoping for a fast and simple race,” told navigator and ex-America’s Cup sailor Marc Lagesse.

SPIRIT OF EUROPE can also provide plenty of sailing expertise with America’s Cup winner Christian Scherrer or Volvo Ocean Race participant Magnus Woxén for example. Using their combined knowledge and experience the crew around skipper Tim Kröger will try to challenge BRONENOSEC for the title.

Joachim Brünner and his crew are sailing on SGM for the first time in this constellation but are highly optimistic: “We have decided to become the surprise winners,” joked the skipper. The Spanish crew of PETITE FLAMME is another Nord Stream Race newcomer and equally ambitious: “We are expecting a fast race and want to be in Saint Petersburg in no more than four days,” said their skipper Juan Carlos Boronat.

The race can be followed best via the race tracker on the event website www.nord-stream-race.com.