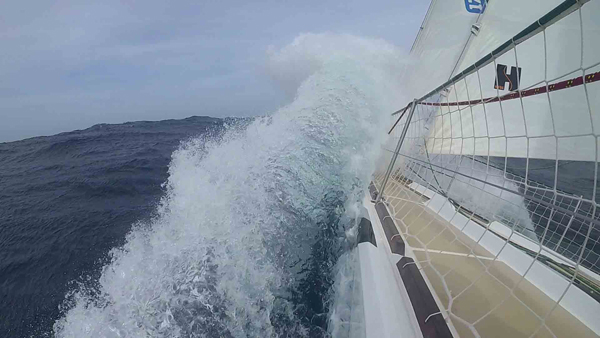 Many of the teams in the Clipper Race fleet have been setting their own boat speed records during some fast and furious sailing on Day 8 of the Stormhoek Race to the Cape of Storms.

Leader of Race 2, Greenings, has notched up 312 nautical miles in a 24-hour period. Interim Skipper, Andy Woodruff, is proud of his crew and explains: “It takes some very committed sailing to reach over a 300-mile day. It’s more amazing that many of the crew achieving this had limited-to-no-sailing experience before their training and now they hurtle down the waves in the dark towards Cape Town.”

The team has passed the halfway point to Cape Town and is looking ahead to the next landmark. Andy added: “Tomorrow night we may pass close by to Gough Island, our one and only landmark we have the chance to see on our route towards Cape Town, an island so remote that it has only been seen by a mere handful of people and famed for its rugged beauty by the way it imposes itself in the otherwise open ocean, too bad it will be night and we won’t actually see it!”

Greenings has increased its lead over second-placed Garmin and third-placed Dare To Lead to around 20nm but there is still all to play for with the windy conditions speeding the teams along towards Cape Town. Garmin Skipper Gaëtan Thomas reports: “Well we are back in the wet and speedy conditions! We are still very close with Greenings and Dare To Lead. Unfortunately, we lost a bit on them but the race isn't over yet!

“Today we should start to see some more wind with some nasty gusts near storm conditions as a big front will pass on top of us.”

Sanya Serenity Coast remains in fourth position, around 50nm behind the lead, with GREAT Britain and Visit Seattle 40nm further back in fifth and sixth. Visit Seattle Skipper Nikki Henderson said: “It’s been an epic day of fast and furious sailing. Everyone onboard has now enjoyed the thrill of helming a Clipper 70 on a surf of 16 knots and above. The whoops and smiles from the back of the boat are great to see. It's tough physically, and takes a lot of concentration so it's awesome that everyone is having a go and sharing the load.”

Nasdaq remains in seventh and HotelPlanner.com in eighth but positions are changing regularly as the battle between the two continues. Nasdaq Skipper Rob Graham reports: “We have spent most of the past couple of days in and out of visual and AIS (Automatic Identification System) range of HotelPlanner.com – it's nice to see another boat and know that you have company after a week alone.”

“And it's especially nice when that other boat is behind you. But we know there's a long way to go yet, and with the positions changing every update, and the fleet still close enough to throw a metaphorical blanket over, anything can still happen.”

Qingdao and Liverpool 2018 are jostling for position to the north of the fleet and are currently in ninth and tenth position respectively.

Currently around 450nm behind the lead Unicef, in eleventh place, is experiencing the sloppy aftermath of a weather front but the wind is expected to back and increase later today.

Meanwhile, PSP Logistics resumed racing last night in twelfth position and Skipper, Roy Taylor, reports: “We are slicing through the water at a very respectable 11 knots with one reef in the Main, Yankee 2 and Staysail set, and just settling into our second night at sea.”

For the top ten teams, Clipper Race Meteorologist, Simon Rowell, explains that the weather front that has been progressing from west to east is expected to catch up with the southern group of the fleet later tonight, before reaching the northern group around 6-9 hours later, which may shake up positions of the fleet.