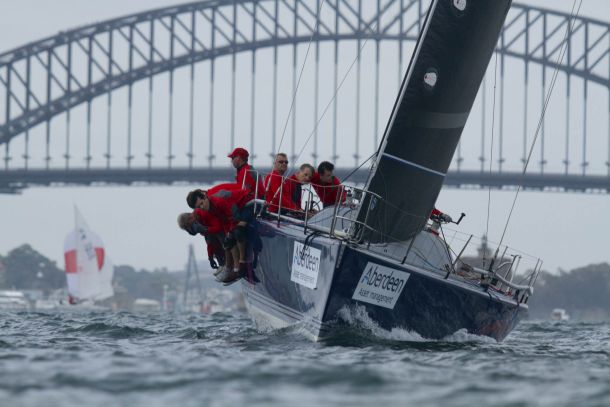 “It was fast and furious and if I wore a pacemaker it would have needed new batteries,” said owner of the Farr 40 Zen, Gordon Ketelbey, at the end of the class’ Aberdeen Asset Management NSW State Title opening four-race round on Sydney Harbour.

Winds were in the mid-range, 9 to not much more than 17 knots, and changeable, and the track inshore. It’s the short course format, 10 gybes on one downwind leg less than a half a mile long and everyone going a million miles an hour that leaves Ketelbey knackered at the end of each race. And he’s the one steering. “It’s the best racing in the world,” the jubilant Middle Harbour Yacht Club skipper declared this afternoon.

“We were fortunate to get good starts in three out of four races,” commented Hunn, the current Farr 40 Australian class President. “We made it to the first mark of those races in the lead, and managed to hold on. The breeze was up and down; it got a little light in the middle though we kept the same medium jib and rig settings all day.”

Joining Voodoo on the main for this regatta and next week’s national title bout is English sailor Gerry Mitchell who has won three Farr 40 worlds, with Barking Mad and Mascalzone Latino, and crews for GAC Pindar’s Ian Williams on the World Match Racing Tour. Mitchell is getting his hours up with the Voodoo team as they prepare to head to the USA for a number of Farr 40 events later in the year.

Transfusion came back from a couple of deep positions to be second overall ahead of Rod Jones’ Kindergarten. “They did a good job today. We had some close duels with them; there’s not a lot between us going into tomorrow,” Hunn added.

Conditions on the harbour reminded Transfusion’s tactician Katie Spithill of her home waters. “It was a shifty shifty day; a bit like Pittwater with a lot more traffic.” Spithill is sailing with Guido’s wife Michelle tomorrow in the Manly Yacht Club Women’s Challenge and Mike Dunstan is stepping on board to finish off the state title. Spithill rejoins her teammates next Thursday for the first day of the John Calvert-Jones Trophy National Championship, which the pedigreed Transfusion is aiming to take out for the fourth consecutive year and sixth time overall.

Carl Russett’s Windy Too crew from the Royal Prince Alfred Yacht Club are finding their feet in a new class and were scrambling with kites up on the odd puffy downwind ride today, Saturday March 21, 2015. “It was only a few years ago we were doing the same thing,” reminds Hunn. “The first time we came to Sydney we were last or second last in the regatta. We all start from the same spot.

“The class wants to encourage the non-grand prix side of Farr 40 sailing. We want to get those owners out on the water having fun, and it goes from there.”

Royal Sydney Yacht Squadron’s Principal Race Officer Ian Kingsford-Smith is presiding over the race management for the Aberdeen Asset Management Farr 40 NSW State Title. The fleet heads back out for another four scheduled races tomorrow, due to commence at 1100hrs in a forecast 15-20 knot easterly with a 40% chance of showers in the morning.