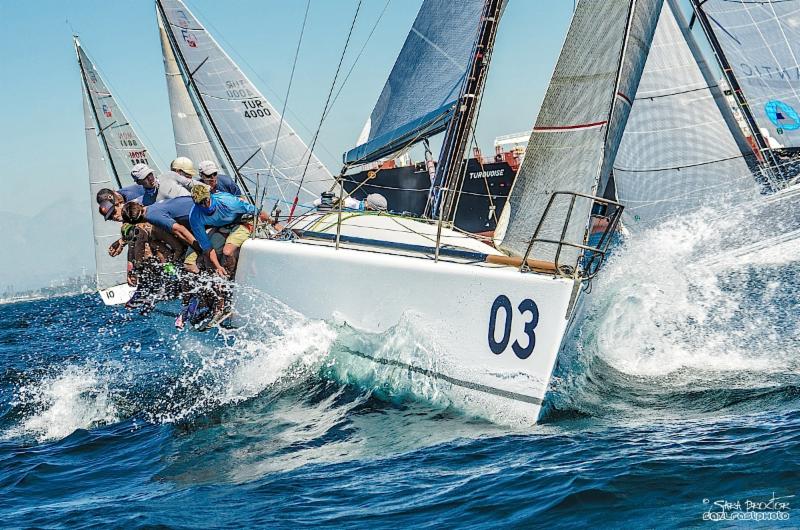 Rick Goebel on Insanity who would go on to win the Corinthian division. Photo Farr 40 Assn.

22/09/2015
There could not have been better conditions for the opening day of the Farr 40 Pre-Worlds Regatta. A steady westerly of 10-14 knots provided the fifteen competitors with sufficient indication of what to expect in the forthcoming World Championship.

Almost naturally, the first attempt to get the fleet away was spoiled by the impatience of the sailors, and a general recall was necessary. That, however, didn't stop the top Corinthian skipper, Rick Goebel, from jumping the gun the next time and his sixth place finish with Insanity was lost. That was only one of his disappointments of the day as Rick had been forced to leave a ring-side seat at the Singapore Formula 1 Grand Prix to attend this regatta.

Goebel's later performances in the races would, perhaps, afford some compensation as he, together with tactician Greg Tawaststjerna, posted a 57 second victory in the second race and a sixth place in the final race of the day, which gave him eighth overall – which would otherwise have been third if his first race position could have counted. He was, nevertheless, the top Corinthian skipper at the end of the first day.

Top place for the day went to Alex Roepers' Plenty, who scored two second places and a fourth. His consistency provided them with a four point lead at the end of the day over the first overseas skipper, Wolfgang Schaefer with Struntje Light. The German sailor is a regular top performer in the Farr 40 class, and like many of the skippers, awaits his regular tactician, who has been on duty elsewhere.

Martin Hill, from Australia, however, has the multi-world champion match racer, Ian Williams, calling the shots on board Estate Master and their consistency, together with a third race second place, sees them in third place overall. They hold a two point lead over another of the overseas competitors, Alberto Rossi of Italy, who won the third race handsomely with Enfant Terrible.

Helmut Jahn and his son Evan, opened their account by winning the first race with Flash Gordon 6, and were fourth in the next, but pulled out of the final race. His crew, who had had to endure a long session of “Hot Yoga” (don't ask!) to make the weight limit earlier in the day, had had enough, and the skipper favourably addressed their wishes.

Day Two
Wolfgang Schaefer and the crew of Struntje Light (GER) mastered the extremely tricky conditions of the second day of the Farr 40 Pre-Worlds Regatta off Long Beach to top the score chart. Their first and second places gave them a five-point lead from the five races over Alex Roepers' Plenty (USA) and Martin Hill's Estate Master (AUS) – their tie was settled by countback.

The weather plagued the Race Committee as much as the competitors with the wind swinging through most points of the compass, before and during races. The midday start of Race 4 was delayed for a quarter of an hour when the wind backed 25 degrees as the signals were about to be displayed. There was a further delay when the overenthusiastic fleet of 14 boats caused a general recall.

With a breeze of eight knots, the course was re-set to 135 degrees and a Z flag hoisted, which caught three boats, to have 20% added to their place points on finishing – one was Roepers' Plenty, spoiling her record. With the unstable wind continuing to back slightly, those who went left early on the first beat of the four-leg course were favoured and Gary Ezor's Coquille rounded the first mark ahead of Kevin McNeill's Nightshift with Estate Master close astern.

These three positions were held down the run, which had become a starboard tack spinnaker reach, but on the second windward leg, Schaefer, guided by tactician Francesco Bruni, took over the front running and once ahead held off the repeated challenges of Estate Master, with Alberto Rossi's Enfant Terrible in third place.

There was another big delay, for the course to be re-set following a further shift in the breeze, to 260 degrees, with a drop in strength to 4-5 knots, for a proposed four-leg course. In the fickle wind, the right-hand side was favoured early, but another backing shift put the left hand side back in the picture. Roepers' Plenty, with Terry Hutchinson calling the tactics, took the best shifts to round the windward mark ahead of Schaefer's Struntje Light.

The wind dropped even further and continued to shift, this time to the right, necessitating spinnakers to be doused by the majority, and the race committee wisely finished the race at the leeward gate after just one round. Plenty was the fifth different winner in this five-race series.